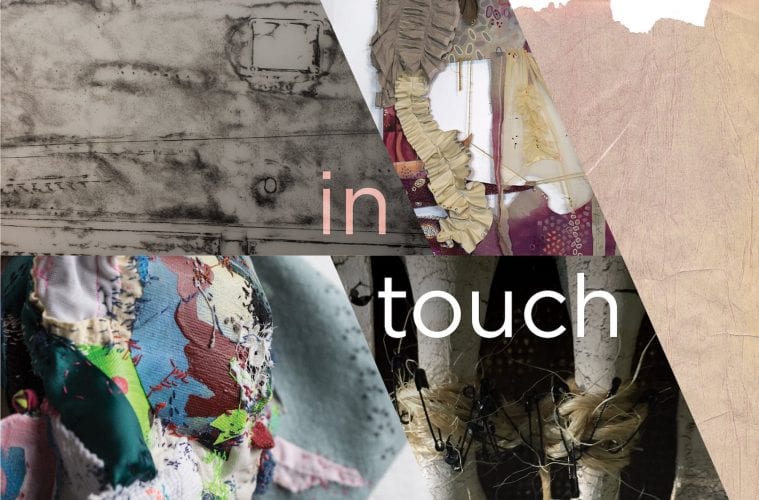 The still-without-a-permanent-home MINT recently presented a satellite show at the Downtown Players Club. In Touch: A Collection of Works by Past and Present Interns is as much a show about tactile work as it is about contact. The curatorial statement notes, “Touch can be a physical connection or bond with someone or something. It can also be an intangible presence, a latent imprint left behind.” Much of the artwork is fluid, reactive, and part of the show’s success hinges on the strength of the Downtown Players Club as a space.

Sarah Nathaniel’s process-based work focuses on line as the primary element of minimal black-and-white paintings. 4 Lines, 78 Lines is made up of drips of black ink that navigate either horizontally or vertically. A difficult-to-see layer of white on white grid underneath guides the indecisive lines in a jittery fashion, like an abstract expressionist etch-a-sketch. Although the frenetic feel can seem counter to the description that her works are “the function of simple meditations,” this can be attributed to the difficulties of soothing anxiety and clearing the mind. Untitled is my favorite of Nathaniel’s, the crackled paint resembling a burnt beam, the visual statement fully resolved. This piece echoes the peeling paint of the upper portion of the main gallery space. In contrast to the regimented rules that characterize process-based art, the work of Lacey Longino plays with visual interest. Her large paintings knit together texture and a variety of marks in an almost map-like fashion. Balancing marks weave in and out alongside brads, staples, chicken wire, the wooden stretcher support and textiles. The ruffled roll of what appears to be an armchair forming the edge of LF, NF, 1 is a surprising gesture — stitched and ripped like a boldly feminine Rauschenberg. L, T, 1A is more delicate, the large work on paper tacked to the wall and framed with a gauzy pleated edge that gently blurs the edges between drawing and painting.

Senescence Revisited by Abby Bullard is fleshy yet ethereal. Giving it some time let unfold the tiny details like delicately frayed edges and tiny copper wire stitches. The pale and wrinkled sheets of framed paper are infused with subtle washes of color, the green and lavender of veins and bruises. Like pinned insect shadowboxes, there is a bit of death and morbid curiosity in these monoprints, like pale flakes of skin carefully preserved and arranged. The work evokes Eva Hesse’s latex and rubber works as they look now, yellowing, aging and losing something.

The highlight of the exhibition is It Goes On by Savonna Nicole Atkins. The raw edges of the venue manifested in a single missing ceiling tile form a kind of tonal and dark reverse skylight in Atkins’ work, an otherwise brightly lit and saturated installation. A patchwork of fabric, thread, paint and tape, It Goes On is like a tumble of laundry picked up by a tornado. Whirling up and out of the landscape of shaggy green carpet up the sky blue walls, the work captures some of the reality of our connection in an increasingly divided world — sewn together but clashing with the thin red line of fate and chance. In Touch is a natural sequel of the previous show, Bipartisan, a performance that produced nonrepresentational, mark-centric formal murals. This influence is partially because the end result was left partly intact but also literal in the case of Jenny Fisher’s installation. Apparitions is composed of the black-and-white rubbings made from the colorful murals of Bipartisan before they were half whitewashed into gallery walls. The scrolls are draped in a black room, forming a curtain of black-and-white stripes. This echoes the geometry of the ceiling, which has the gridded frame of a drop ceiling sans the tiles. The overall effect is a strong visual statement, but the one-way collaboration is missing information in the way empty houses hold the energy of their past but not necessarily the stories.

This is how much of the artwork settles in so synchronistically to the total environment, alluding to the transformation of building, transforming and destroying. After a year and a half of operation, it feels like the space has built up enough history to have its own dynamism beyond the quirky low budget rehab of a dilapidated dentist’s office. Unfortunately, the venue’s future iteration is uncertain given the recent acquisition of the building by developer Newport Holdings.