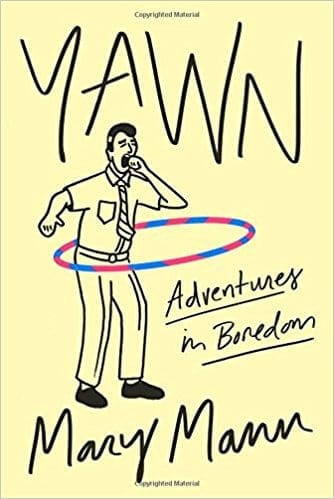 Mary Mann’s Yawn (FSG Originals) is an excavation of that absurd portion of the human condition we refer to as boredom. It is subtitled “Adventures in Boredom,” which points to part of the problem. Adventures are not boring, and for Mann, boredom itself is not boring because she was fascinated enough by it to write an entire book on the subject — though it’s a relatively short book, and the book itself is sometimes boring. Please don’t construe any of those statements as negative, though boredom is often presumed to be so.

What exactly is boredom? Mann’s interpretation does hinge on a wide terrain of painful pathos. “‘Bored’ is a big umbrella we use to cover a range of emotions,” she writes, “apathy huddled in close with irritability, restlessness, futility, loneliness, and despair” (92). This is a clear-cut cocktail of existential angst with which all human beings are intimately familiar. Despite its universality, our most common impulses are to deny that we are bored or to admit it only in order to attempt its alleviation. Mann is worried about whether boredom is a problem that needs to be solved. Nobody likes to feel bad feelings, yet of course we all sometimes do — occasionally to a terrifying extent.

She researches monks isolated in the desert, the origins of tourism, the work environment at Google, and so on. Alongside her research, which is presented in a free-range pop science mode akin to Malcolm Gladwell, the author charts her own extensive experience with the ups and downs of boredom. Each chapter is devoted to exploring a different facet of the feeling in order to arrive at what we already know — that boredom proliferates rather unavoidably and there is no cure. Her finest writing is in the most personal parts of the story where Mann ruminates on her life as a freelance researcher. She pretty much lives in libraries, smuggling in contraband coffee for her long plunges into the murky depths of dusty shelves holding obscure collections in a thick silence with no one else in sight beyond one other regular who always asks her the time.

These two are Stack Pirates. They are pioneers among huge piles of books that, from the outside, appear as a sea of boredom. As a fact-finder for others’ projects, Mann would seem to agree with Warhol that “you need to let the little things that would ordinarily bore you suddenly thrill you.” But even when she plunges in with optimism, the naivety of that position soon strikes her full force. She considers the joke by another visual artist, John Baldessari, who built an entire exhibit just by covering all its walls with the repeating declaration “I will not make any more boring art.” Mann is hip to some kind of relationship between boredom and creativity but falls short of cosmic answers.

In many ways, Yawn is nothing more than a defense of nuance. Paul Auster’s novels are exceedingly boring if you don’t pay attention to the slight variations embedded in the endlessly paranoid process of being alive. Mann is similarly intrigued by John Cage’s 4’33” performance of total silence, about which he reflected, “If something is boring after two minutes, try it for four. If still boring, try it for eight, sixteen, thirty-two, and so on. Eventually one discovers that it is not boring at all but very interesting” (132). Our tendency is to simply feel guilty when the first two minutes don’t go so well.

The first couple chapters of Yawn provoked a sense of futility and restlessness in me, but I pressed on anyway and eventually found the totality of the book rewarding in a way that is hard to describe — in large part because the boredom induced by it is the reward and our civilization is not accustomed to valuing boredom as a reward. There’s no eureka moment. Yawn is not even particularly satisfying. But it doesn’t fail; it helps in the way a yawn provides necessary oxygen to the brain. Mann has something to contribute.