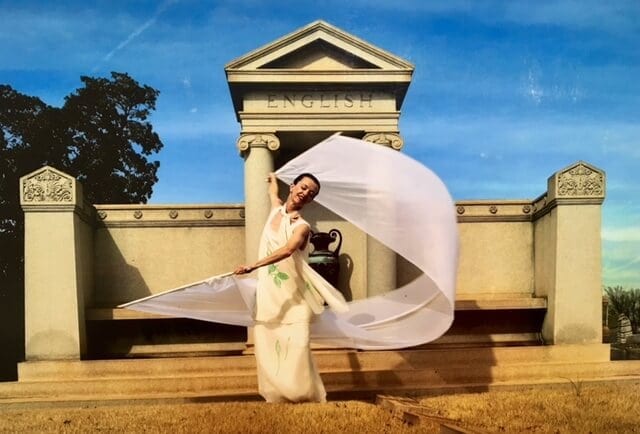 Lee Harper is a dancer, choreographer and educator who has devoted the better part of her professional life to advancing the arts in Atlanta.

As founder of Lee Harper & Dancers, she built a home base for budding ballerinas (as well as pointe, tap, jazz and modern students) in 1980, that has also served as a launch pad for future professionals, audiences, patrons and advocates for all art forms. Former pupil Jasmine Guy studied under Harper at Northside School of the Arts before going on to star in the TV sitcom A Different World, and is slated to direct The First Noel for Kenny Leon’s True Colors Theatre Company this winter. And Patti Herring, a founding member of Lee Harper & Dancers, has been chairing the Performing Arts department at Woodward Academy since 1982. Harper is an enthusiast. Ever-ready to kick up her heels to entertain audiences, she has taken center stage at the Fox Theatre, performed in church sanctuaries and danced in the great outdoors — as scores of vacation snapshots taken around the world attest. And she is a memory-keeper, whose Buckhead studio walls are papered with children’s drawings, photographs, poems, handmade quilts, paintings, love letters from former students and thank-you notes from parents who have watched their children blossom — not just as performance artists but as human beings — under the firm yet loving guidance of “Miss Lee,” as she is known to her students.

Given her resumé — she danced at the opening and closing ceremonies of the 1996 Summer Olympic Games, was commissioned to choreograph nine operas for Atlanta Opera, has received fellowships from the National Endowment for the Arts and Lexus Leader of the Arts and won a Governor’s Awards for the Arts and Humanities — it would be easy to conflate Harper’s accolades and titles with her worth. Her true value, however, is immeasurable. And it is written all over her face.

When Pulitzer Prize-winning novelist Toni Morrison appeared on The Oprah Show in May of 2000, she neatly summed up what every child has ever looked for in a parent’s gaze by asking, “Does your face light up [when they enter the room]?” Morrison went on to explain that although adults mean well when they zero-in on any perceived problem areas (uncombed hair, unwashed hands, mismatched socks), the takeaway for children is not that grownups want the best for them, but that we find fault in them. The danger of the critical face, says Morrison, is that it tends to obscure what is in the observer’s heart.

Fortunately, for her young charges, Harper has a gift for leaving the kind of heart prints that let them know they are valued — just for being themselves.

“When I recommended Lee for the Governor’s Award, I stressed her passion for her students,” says Herring. “She really loves those [kids] . . . and has always wanted to pass all that she loves about dance to them.”

Harper’s need for perpetual motion began in childhood and remains a defining characteristic today. You can feel her energy before she comes into view. She moves like quicksilver. And like a flash of lightning, once she makes an appearances, there’s no guarantee that she’ll linger.

Minutes into her ArtsATL interview, she leaps from her chair in response to a question, saying, “I gotta show you a picture!” as she bounds out of her office and into the light-filled studio space. En route, she notices a cardinal perched in a dense canopy of trees outside and says, “They always remind me of my daddy!” with the enthusiasm of a very small child who is seeing the world through fresh eyes. But when asked about her tendency to whip back and forth (literally and figuratively), she considers the question for a beat, cocks her head to one side and asks, “I do that?” with complete sincerity.

“All I remember is this little girl out in the front yard just twirling and twirling, and falling down, then twirling and twirling again,” is how a family friend sums up her first impression of Harper, who was raised in Hickory, North Carolina. When a family doctor prescribed ballet classes to correct the five-year-old’s flat feet, she took to the structure and discipline of dance lessons like a dervish to a Sufi chant.

Eleven years later, she enrolled at The Juilliard School in Manhattan to pursue her dream of becoming a professional dancer.

“I left Hickory at 4 p.m. on a Southern Railway train, and woke up crying at Penn Station at 10 o’clock the next morning,” she says of the solo ride north.

The inauspicious start notwithstanding, Harper remembers being impressed by the peerless training and technique on display during professional children’s classes at Juilliard. But the cookie-cutter physiques, obsession with weight and competition that bordered on cutthroat tactics left her cold. Being singled out as the only Southerner in class — which triggered laughter every time Harper opened her mouth — left the self-described “tree-hugger” and “country bumpkin,” longing for the warmth of all she’d left behind back home.

Choosing her words carefully today, she describes Juilliard as “not a very warm and fuzzy place.” A gross understatement, given the memory of one classmate who became catatonic with fear when asked to execute a combination across the floor, and had to be physically removed from the studio as a panel of judges looked on with no outward sign of empathy or compassion. The irony of a dancer being too frightened to move was so untenable to Harper that she swore off the possibility of ever becoming a teacher herself. Fortune smiled on her when Vittorio Giannini, a former Juilliard professor who was named the first president of the North Carolina School of the Arts, recruited her to complete her formal training in her home state. “Compared to these weirdos at Julliard,” she says, “I wanted to go where that wonderful Italian man was going!” And she did, earning a BFA in Dance in 1968.

By the time she graduated, Harper was ready to take another crack at New York. She worked a series of odd jobs to pay the bills: temping at a law firm, working at Andy Warhol’s restaurant “for one night” and overseeing the theatre, dance and music advisory panels for the New York State Council on the Arts, all while studying under masters like Merce Cunningham, Richard Thomas and Barbara Fallis.

She took classes with Alvin Ailey, auditioned alongside 25 men (owing to scheduling conflicts that precluded her from trying out among female dancers) for a coveted spot in his company — where her love of jumping and twirling turned heads and landed her one of three coveted spots from a pool of 300 candidates. A natural-born cheerleader, Harper never regarded success as a zero-sum game — which made her an outlier among the more ambitious members of her tribe. Marianne Handy Hraibi, a fellow dancer, recalls Harper as her “first and dearest friend in New York” back in 1970, adding, “[it] was glorious to feel so safe in [Lee’s] clean honesty and genuine support.”

Harper’s life changed in 1971 when she got to perform Ailey’s choreography with the company for Leonard Bernstein’s MASS: A Theatre Piece for Singers, Players, and Dancers in celebration of the opening of the Kennedy Center for the Performing Arts in Washington, DC. Four years later, she relocated to Atlanta after being asked to reprise the piece for the Atlanta Symphony Orchestra.

Her collaborations with then-music director of the Atlanta Symphony Youth Orchestra, Jere Flint, were holiday staples that delighted Atlantans for 37 years.

“Lee has a great imagination,” says Flint, who retired three years ago. “I would choose a piece of music . . . and trust her explicitly to come up with something that worked. Invariably, she delivered fantastic concepts and had an ability to make the music sparkle for kids, adults or whoever was in the audience.”

Despite her youthful conviction that she would never teach, Harper has worked her magic as a faculty member of Appalachian State University, Woodward Academy and the Westminster School — where she will choreograph Les Miserables next fall. Some of Harper’s students during a performance. (Image courtesy Lee Harper.)

Kate Morgens, who chairs the Performing Arts Department at Westminster, calls Harper “an enchanting, brilliant presence . . . whose reputation carries the kind of prestige that makes our students strive to respond in kind.”

Former student, Chelsea Kolff, thinks of Harper as a mother, mentor, friend, teacher and inspiration. “I’ll never forget [Miss Lee’s] mid-warmup digressions about life in which [she] imparted in us a sense of self-worth and responsibility to the people and world around us,” says Kolff.

“I did not want to have a school filled with the kinds of bun-heads I kept encountering [during my formal training],” says Harper. “Everyone can dance! You don’t have to have a certain body type. You don’t have to get your leg up next to your ear. If you want to dance, you will find a way to do it.”

The key, she says, is to remain open to the spiritual aspects of dance, as opposed to trying to master a purely academic or mechanical approach to movement.

“Dance today feels the same way it did when I was that five-year-old twirling on our front lawn,” say Harper. “I am so thankful.”