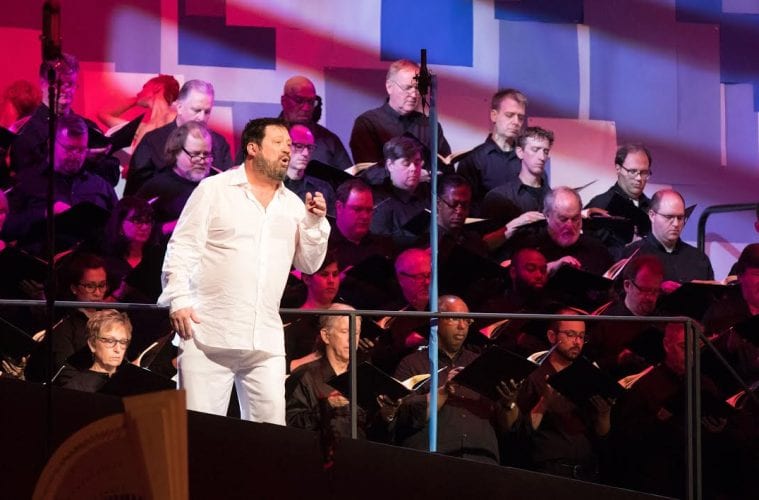 On Thursday evening the Atlanta Symphony Orchestra presented a performance of Christoph Willibald Gluck’s opera Orfeo ed Euridice at Symphony Hall. ASO music director Robert Spano conducted the concert, in which the orchestra was immersed in the simple, abstracted staging and scenography. The concert, which featured dance choreographed by Lauri Stallings, will be performed again on Saturday night.

It was a production that left one with mostly good but, at times, mixed feelings.

Gluck’s Orfeo ed Euridice belongs to the genre of opera known as azione teatrale, although it is atypical of it. Popular in 18th-century southern Europe, azione teatrale is typically shorter and of smaller score than a full-length Baroque opera seria, thus the ASO was able to present Orfeo’s three acts in a single, intermission-less performance. Plots of the genre tend to involve a struggle or trial to be overcome by the protagonist — so the story behind Orfeo ed Euridice fits that mold. Gluck also drew inspiration from the practices of French opera of the day. Even more importantly, Orfeo ed Euridice represented a remarkable reform of Baroque operatic practices that would influence the nature and aesthetic of opera ever after, including those of Mozart and Wagner, making opera an art form that would never again really be the same as it had been.

Countertenor David Daniels bore the largest share of solo singing in the lead role of Orfeo (aka Orpheus), essentially his signature role. He is an emotive singer with surprising power and rich vocal color, in contrast with many countertenors who tend toward a thin or transparent sound. Both as actor and singer, he suits Orfeo well. Sopranos Janai Brugger and Susanna Phillips were both captivating in their companion roles as Amore and Euridice. The ASO Chamber Chorus, prepared by director of choruses Norman Mackenzie, did an exemplary job for their part, ensconced up high in the back of the stage. Spano and the orchestra itself, with a moderate-sized complement of players in this performance, were suited to the music.

The role of Orfeo was originally written for a male alto castrato, highly popular in Italian Baroque but a practice that has long since been cut off in the operatic world. In the later French revision of the opera, the role was sung by a haute-contre or countertenor — a high male voice in the alto range that is, in comparison, unique rather than eunuque. During much of the 19th and early 20th centuries, Orfeo became a “trouser role” sung by a female mezzo-soprano. The solo countertenor, however, became reestablishd in the latter 20th century with a renewed interest in early music.

Stalling’s choreography was at its most effective in those instrumental numbers that are intended as “Ballo” (“ballet”) in Gluck’s score — such as the “Dance of the Blessed Spirits” and the final celebratory ballets in the Temple of Amore followed by the chorus “L’Amour triomphe” — or the parts that supported the staging with movement, such as attending the veiled spirit of Euridice upon her entry. At other times, episodes of movement by her troupe, glo, were distracting when the primary focus should have been elsewhere, such as on a singer in the midst of singing. One could raise the argument of multiple points of focus, but that really doesn’t fly here. 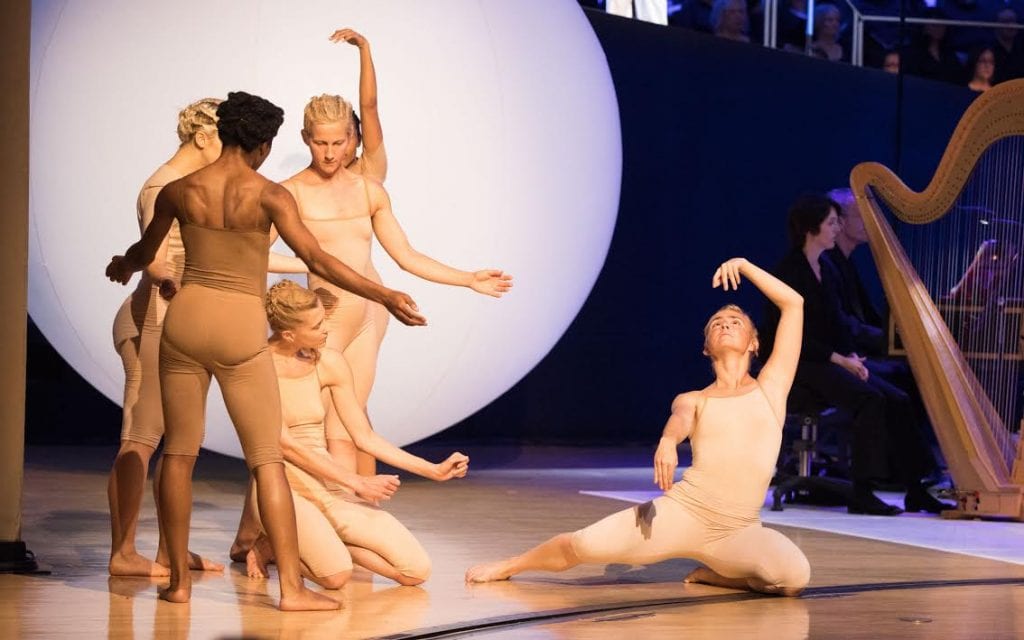 The dancers at times distracted from the focus on the music.

This was exacerbated by the fact that except for the initial presence of Amore behind the first violins, and Euridice’s unsung entry, the singers were positioned upstage on a platform in front of the chorus. So when movement took place downstage to the side, even with reduction in illumination, it drew the focus away from the sung drama, distracting from rather than illuminating or supporting it. Overall, unlike Stallings’ previous collaborations with Spano, the movement seemed often at odds with the music. While some choreographers like to alter the music, even substantially, to fit their vision of movement, that creative license wasn’t possible in this case. After all, a primary premise of this production was to make a live recording of Orfeo ed Euridice with Daniels for release on ASO Media, so messing around with the score simply was never an option.

The larger impression, in the end, was that the movement was trying very, very hard to make itself the most important element of the show. As interesting and engaging as the choreography was on its own terms, that felt a bit gratuitous in this context. Less would have been more, and more effective in the end.

That begs, then, the questions of staging and scenography, as it would have seemed entirely logical for stage director James Alexander to have had the soloists make their downstage to the apron, which was open when not occupied by movement artists (aka “dancers” to most of us). That, however, might have threatened inconsistencies in the audio recording process, which, again, was a primary goal in terms of producing a live CD from these performances.

Then there is the scenography by Daniel Arsham, which seemed more of an art installation with its large white spheres rising and lowering, seemingly unrelated to Gluck’s opera, but more clearly in affinity to Arsham’s own “Hourglass” installation over at the High Museum of Art. Most telling in this regard was the background presence of a glo movement artist dressed as a Zen monk, observed both in the Galleria and moving across the platform at the back of the stage before the concert began. Likewise, it was unrelated to the performance at hand, but clearly from Stalling’s choreographic contribution to Arsham’s exhibit at the High — thus a kind of “advertorial” connection that was, again, though clever enough (assuming audience picked up on it), not really in support of the performance at hand.

Nevertheless, one should readily expect that, absent these curiously anomalous elements, the audio recording for ASO Media will come out exceedingly well, and we heartily look forward to its release.