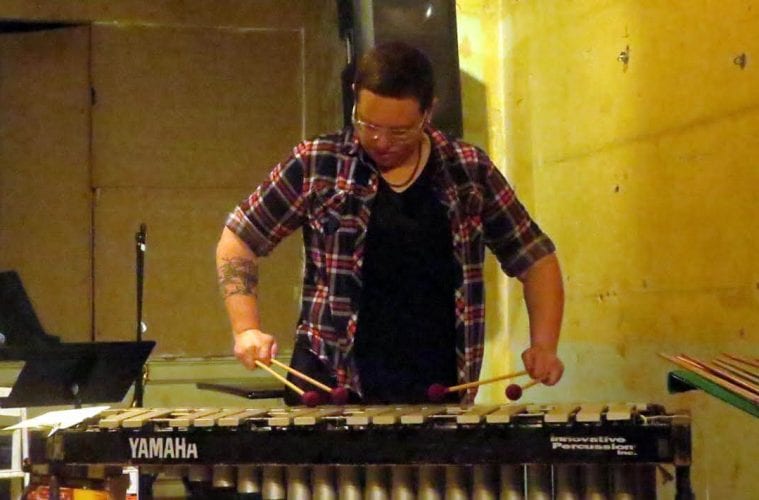 On Wednesday evening, Eyedrum Arts and Music Gallery hosted the ninth installment of its “Composer’s Concerts Series” featuring the music of Olivia Kieffer, Bill Pritchard and Klimchak. As much as it was an engaging new music concert, it was also occasion for friends and colleagues to say farewell to percussionist-composer Kieffer.

This was Kieffer’s last concert as an Atlanta resident, as she will be moving back to her home state of Wisconsin on Saturday. She will bide the summer there before pursuing a second master’s degree in music — this time in composition. Her first master’s was in percussion performance, earned at Georgia State University. While earning her bachelor’s degree at Cincinnati Conservatory of Music, she met percussionist Stuart Gerber when he was pursuing graduate studies there. Gerber later became associate professor of percussion at GSU and urged Kieffer to do her graduate studies there. She arrived in Atlanta in the fall of 2004 as a graduate assistant and soon became part of the freelance and new music scenes.

In 2007, Kieffer and Pritchard met on various freelance gigs, Kieffer learned that Pritchard played six-string bass guitar in addition to tuba, and he became the bassist for her new Clibber Jones Ensemble when it was formed at the end of 2011. Kieffer met Klimchak in 2012 when she was one of the percussionists hired to perform two of his pieces for an Atlanta Beltline performance. That’s the background. Kieffer, who has curated Eyedrum’s “Composer’s Series” this season, got the three of them together for this musical goodbye party.

Pritchard opened the show with three of his Amplituba compositions — music for amplified tuba involving electronic effects such as digital delay and looping. At times funky, jazzy or occasionally simply raucous, the music overall had a pulsing, driving undercurrent. The first two, “Entanglement” and “Green Lady,” appear on his Amplituba CD, released in April. In the case of “Green Lady,” Pritchard laid down a looped bass line which he played over. The new piece on the docket was “It’s Going To Be Okay,” which included singing into the tuba, with its final words “Thank you, Olivia” in tribute to Kieffer.

The larger middle portion of the show focused on the music of Kieffer. Keyboardist Amy O’Dell, who recently recovered from hand and wrist injuries incurred in a bicycling accident, expertly performed Kieffer’s “Nobility of Homophones” on two toy pianos, with a secure feeling of vigor and energized momentum. O’Dell is also a member of Clibber Jones Ensemble.

Most prominent among Kieffer’s compositions is “Texture of Activity” — a book of 55 short toy piano solos. In this performance, we heard two suites of pieces drawn from that book transcribed to other instruments. Her penchant for writing brief post-minimalist works lends itself to transcription, sometimes with delightful surprises. Such was the case with six selections played on classical guitar by Nicholas Deuson, who played directly from the original keyboard scores but made many artistic choices that suited the instrument’s technique and demeanor, giving the music a mellower character. Especially captivating was “JJ’s Lullaby,” which was remarkably thoughtful and introspective.

More out-front in tone were three selections Kieffer transcribed for saxophones, which she heard for the first time on the day of the concert. Saxophonists Tim Crump (another Clibber Jones Ensemble member) and Jeff Crompton brought these versions to birth.

Kieffer herself played “10 Short Pieces for Vibraphone” as the final piece in her set, playing the movements in an entirely different order than originally numbered. Kieffer’s compositional style makes this kind of mix-and-match fairly easy. “10 Short Pieces for Vibraphone” and Deuson’s guitar renderings from “Texture of Activity” are to be recorded and released on the Belarca label.

The concert closed with three new compositions from the crowded cranium of Klimchak. All were electro-acoustic pieces for a small setup of percussion and toys, their sounds altered by various electronic controllers and sent to Klimchak’s laptop for digital processing. It was the most exotic music of the evening.

Prior to the concert, Klimchak considered these new pieces still “works in progress,” but, in an email the next morning, concluded that “upon consideration, I think that’s wrong. They are completed works and last night’s performance just confirmed that to me.” Even so, his perspective as a composer/performer is that his compositions have some degree of inherent flexibility to them. “No work is really set in stone,” said Klimchak, “and will change a bit based on my mood and that of the audience.”

The three new pieces were entitled “Sticks and Tones,” “Finger Against the Flood” and “Rated PG for Repetition.” “Finger Against the Flood” included some Tibetan harmonic singing, which, in processing, toward the end turned Klimchak’s single voice into a surprisingly rich, glowing electronic chorus. “Rated PG for Repetition” felt like a streaming, primal rush of 16th notes underlying its momentum.

Over recent months Eyedrum has cleaned up a lot as a venue, getting rid of a lot of clutter that made the place a little uncomfortable in its earlier days. It feels much more habitable now. The concert load out was essentially done by 11 p.m., and there was already a small group of young people hanging outside, waiting for yet another concert to begin. A faint but distinct smell of pot wafted by, and a vagrant was doing a “let me help you” hustle to leverage a handout — not the first time I’ve experienced the latter in front of Eyedrum.

To be quite honest, it is a somewhat desolate, uncomfortable area at night for an “arts district,” and with the specter of looming development there, the fate of that noble notion is still up in the air.