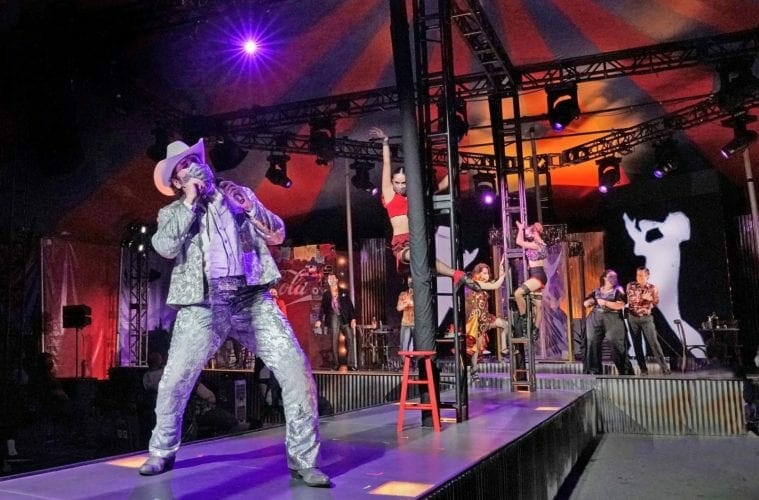 Review: The Atlanta Opera delivers with its “Threepenny” series under the big tent

As artistic leaders throughout Atlanta — and around the globe — try to determine how to best present work and stay afloat while maintaining safety protocols for their artists and patrons, some have figured it out better than others. It never crossed my mind that an opera company known for extravagant casts, sets and productions would be able to pivot so adeptly and provide COVID-friendly fare, but it’s never safe to underestimate The Atlanta Opera’s Tomer Zvulun.

Zvulun, the opera’s general and artistic director, began looking at how he could produce during the pandemic last spring and, in the fall, launched his company’s Molly Blank Big Tent series at Oglethorpe University with productions of Pagliacci and The Kaiser of Atlantis, plus three concerts.

The outdoor programming worked, and the company is at it again with two full spring productions — The Threepenny Carmen and The Threepenny Opera, in the parking lot of the Cobb Energy Performing Arts Centre, the opera’s regular venue. The shows run in rep (with some additional concerts) through May 9, with evening performances. Both productions will eventually stream as well as part of the company’s Spotlight Media program.

The opera has done an impressive job of making these outings as safe as possible. The open-air performance tent allows a maximum of 200 audience members, with seating in pods/chairs of two each, three feet apart from the others. Masks are required for performers and viewers, and no eating or drinking is allowed. The actors keep as much distance as they can onstage and attendants take temperatures and conduct health screenings before admitting patrons. 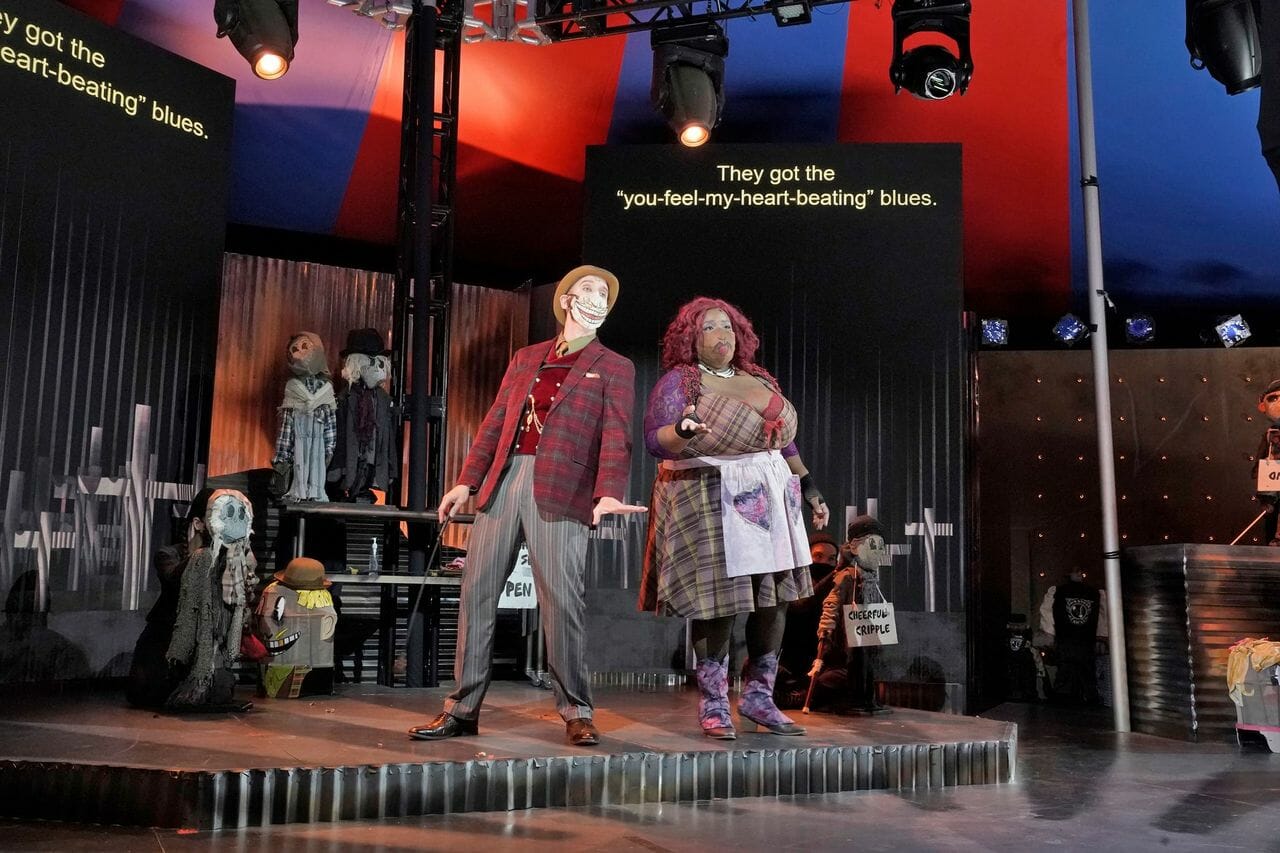 The shows themselves are new takes on classics. This Threepenny Carmen takes place in a modern-day flamenco bar in Texas, where Tom Key narrates as Lilas Pastia, a barkeep warning us about the infamous cabaret singer Carmen (Megan Marino, alternating with Ashley Dixon). The ensuing love triangle is the same, with Don Jose (the magnificent Richard Trey Smagur) seeing and quickly falling for Carmen and killing Zuniga (Jose Caballero), with whom Carmen has flirted. Other central characters include toreador Escamillo (Michael Mayes, alternating with Theo Hoffman) and Micaela (Jasmine Habersham), persuading Don Jose to visit his mother, who has COVID. Spanish flamenco dancer Sonia Olla is also in the cast.

Zvulun and company have pared the production to about 90 minutes, some of it rearranged. Carmen purists might miss the full opera’s sprawling nature, but it’s simply not possible to do as much here, although Ricardo Aponte choreographs some lively dance numbers.

Of course there’s the legendary music, but this telling is more character-based, with plenty of ambience. The seedy bar has lots of details — empty bar stools, license plates on the wall and a phone booth on the street outside. The leads manage to have chemistry although they don’t share much intimate space with each other. Mayes, in rhinestone-cowboy attire, belts “The Toreador Song” in crowd-pleasing fashion. It’s a bit disconcerting to see a live performance featuring singers with masks on, but the COVID-era setting makes it fitting — and mandatory. This is, overall, an energized new take on Bizet’s 1875 masterwork.

In Zvulun’s version of Kurt Weill and Bertolt Brecht’s Threepenny Opera, based on a 1950s’ adaptation by Marc Blitzstein, puppets created by the Center for Puppetry Arts’ Jason Hines and Jon Ludwig play the cast’s assorted prostitutes, gangsters and beggars. The puppets share the stage with the murderous Macheath (Jay Hunter Morris) and the woman he marries, Polly (Kelly Kaduce). Polly’s parents — the Peachums (Kevin Burdette and Ronnita Miller) — disapprove and want to see Macheath arrested. Key narrates here, as a street singer, but Morris and Miller are the standouts, along with the wonderfully assembled, fully dimensional puppets. The opening sequence, introducing us to the characters as Macheath slices up many of the townsfolk, is simply splendid. 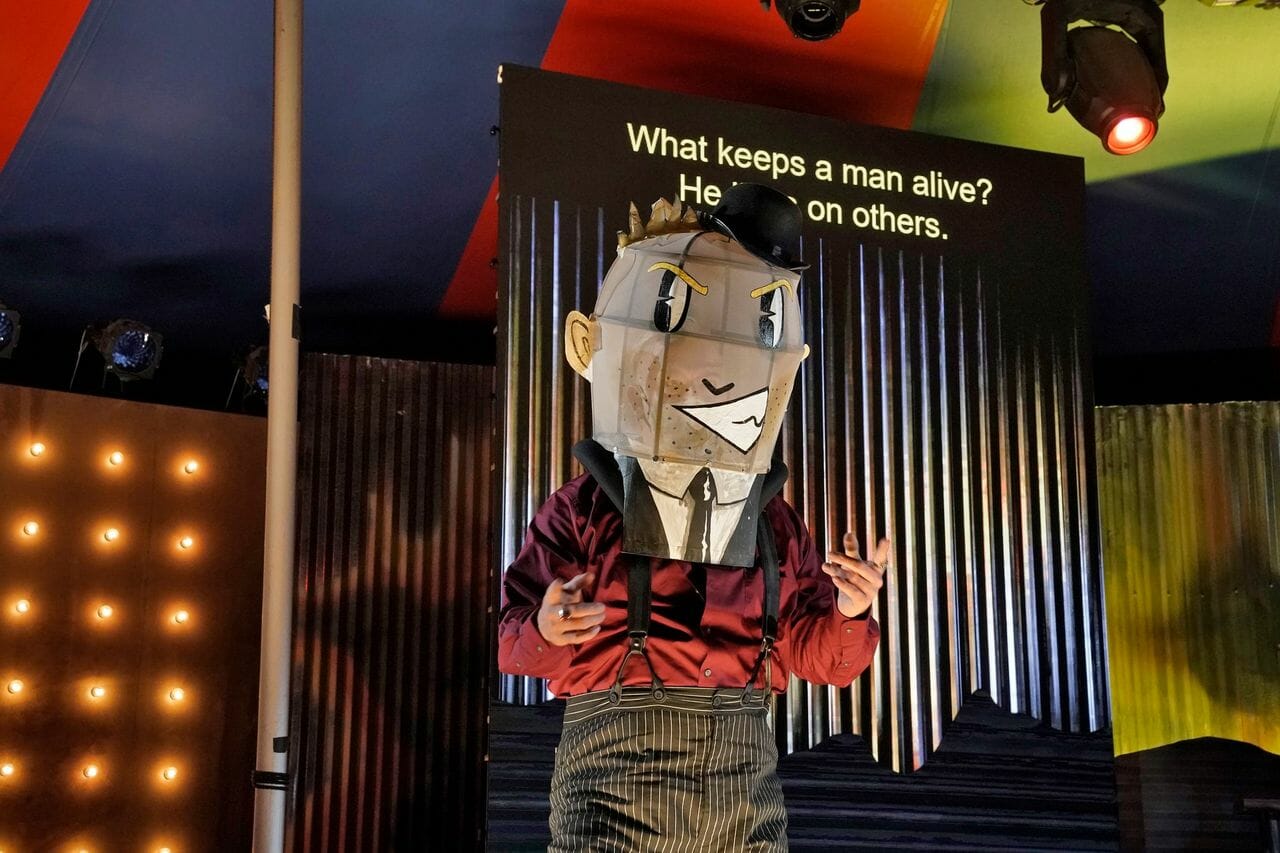 Tenor Jay Hunter Morris is Macheath in “The Threepenny Opera,” which makes extensive use of figures created by the Center for Puppetry Arts.

The music for both shows is conducted in a tent behind the mainstage. Zvulun directs both productions; Jorge Parodi music directs Carmen and Francesco Milioto music directs Threepenny Opera.

Both operas have style and innovation, but I prefer Carmen. It’s a stripped-down version that has much of the same essence as the original. If Carmen is more alive and more overt, The Threepenny Opera fit its stage much more succinctly. It never feels too big for its surroundings. The masking, too, is more imaginative. Masks are tailored for each individual face, with an assortment of smiles, grins and grimaces. It’s easy to forget the players are even wearing them.

ThreePenny Opera has the look of a graphic novel and both productions rely on filmed media (by Felipe Barral) and projections (by Erin Teachman). The costumes — designed by Joanna Schmink for Carmen and Eric Teague for Opera — are exemplary.

Except for a drive-in version of the Alliance Theatre’s A Christmas Carol last winter, these are my first performance outings in more than a year, and the joy in being out seemed palpable among both night’s crowds. In his curtain speech, Zvulun mentioned the inherent challenges of staging such works and some obstacles are unavoidable. I could have done without the surprise arctic blast that swirled through Carmen’s opening night, but coats and available blankets were more in use for Opera. It’s also odd to see performers belt an aria and seconds later see them walk around outside the open-air tent. Yet, these distractions didn’t really lessen the impact.

I can, without hesitation, say that these are the best under-a-tent, condensed, masks-on-for-the-entire duration that I’ve ever seen — and hope to ever see. Let’s all hope that by fall, these performers are back in their respective venues. Until then, The Threepenny Carmen and The Threepenny Opera are perfect reminders that Zvulun has never met a project that he wants to half-ass.