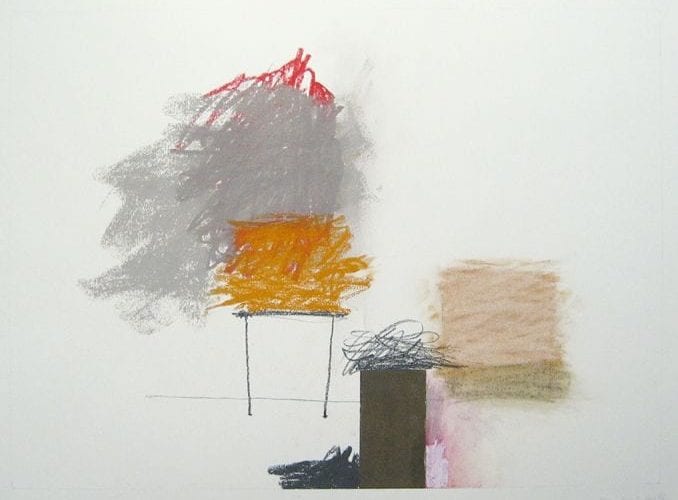 Review: The fertility of instability, and its possibilities, in Rocío Rodriguez’s “Purge” Painter Rocío Rodríguez’s exhibition “Purge,” at Sandler Hudson Gallery through September 8, offers a clean view of the essential elements of her dramatic abstractions. In a refreshing turn, her new works bring an economical minimalism to her gestural dexterity that further removes her compositions from an imposing narrative. In this series of drawings, both on paper and on site, she breaks down and exposes the compositional forms of her work while simultaneously broadening her scope.

Unlike Rodríguez’s recent large-scale paintings, these 15 drawings on paper appear less nuanced, and yet they get to the heart of the matter. Utilizing charcoal, pastels and a minimal color palette, she still focuses on the intersections of conflicting forces, but now they are distilled to the essential elements. She seems to be offering a visual sampling of the empirical language that informs her work, and it’s all about letting the medium itself add to the exploration.

The compositions are rendered in a style that sets graphic and painterly techniques in tension, their edges challenging the balance of stasis vs. action. Contradictions are manipulated for maximum effect. When color is used, as in “may 8, 2012,” warm, hazy ochres offset cool patches of bluish gray. In many of the works, blurred, smudgy marks float near blocky, totem-like masses whose weight offers a counterpoint to the fragile, smoky textures that inhabit the same space. In their simplicity, the forms and lines seem to comment upon the act of drawing itself and the outsize allusions that can be made from the smallest of gestures.

In her two smallest compositions (“january 17, 2012, no. 1” & “january 17, 2012, no. 2”), she has distilled the forms down to their most simplistic empirical language. In both drawings, a smoky gray blur rises upward, contrasting sharply with a black rectangular form. In this elegant juxtaposition lies a metaphor for any dichotomous pair that may be brought to mind: the ethereal vs. the concrete, chaos vs. order, destruction vs. creation and so on, which may be read on either a micro or macro level.

With her titular site-specific work “Purge,” Rodríguez creates even more drama. Her kinetic marks explode across two walls, producing a mural that, although without color, engages the techniques of her smaller pieces and executes them in an epic scale. The fearlessness of her mark-making and its inherent energy pull the viewer into the mural, much like her 2010 piece at the Museum of Contemporary Art of Georgia, “The Wall.” Here, her architectural pillars, stacked, blocky forms, erasures, black masses and scribbles collide, jostle for position, clash, fall away, fade and are recast. Within these abstractions there is a sense of the march of time, as though one can see the building and collapse of civilizations through imposed hierarchies.

As with her works on paper, the artist is not interested in the placidity of mere being, but in the inherent fertility of instability and all its possibilities. The process, in its metaphorical content, seems informed by studies of structural, environmental and socio-cultural instabilities and also, despite the drama, a sense of play. Essentially, though, the compositions are open narratives, ripe for the viewer’s sense of meaning. In Rodríguez’s work, the edges of seemingly fixed boundaries are fluid, and their points of collision are fodder for completely other forms and worlds to be imagined.