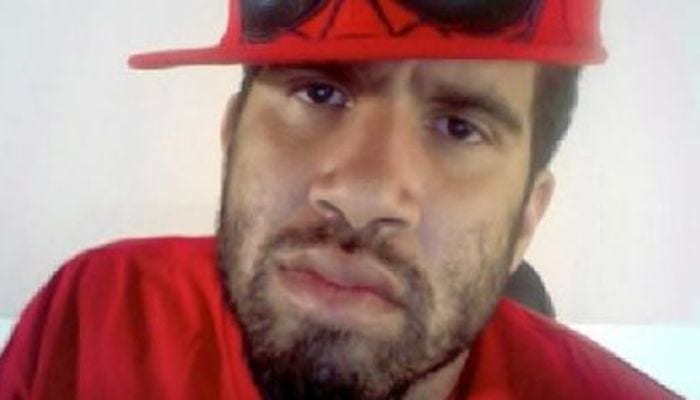 Review: Dead animals, gay Miamians and the importance of context, at the Contemporary Exhibiting artist Jayson Scott Musson, in character as Hennessy Youngman, will be interviewed September 6 about creativity, career, and the Internet.

Performance art bewilders a lot of people, regular folks and cognoscenti too. And with good reason: akin to beauty, its relevance is in the mind of the observer. A show on view at the Atlanta Contemporary Art Centerthrough September 16 provides a sampling of current performance practices via the work of four artists: Clifford Owens, Jayson Scott Musson, Anya Liftig and Laura Ginn. Titled “Deliverance” (in a nod to that movie’s 40th anniversary), the exhibition is curated by ACAC Director Stuart Horodner.

Owens, the most accomplished artist of the four, kicked off the exhibition with two performances before the official opening. Called “Photographs With an Audience,” they were part of a series of events he has mounted in various cities, for which the performance and the “artifact” are both, as the title indicates, pictures taken of the performance. At an artists’ panel held on July 14, Owens explained that he doesn’t like to describe his work as “participatory.” He prefers “engagement,” the difference for him being that in the former everything has been decided in advance, whereas the latter requires the audience to be present and active.

I would also describe his work as experiential. For Owens’ events, the audience gathers around an area set up for a photo shoot with a medium-format camera and lighting. He begins talking in a conversational style, warming up the crowd with anecdotes, which lead into often personal and probing questions he poses to the audience: “Who’s divorced?” “Who’s gay?” He then asks those people to stand in front of the camera for a photo. What’s on view at the Contemporary are the results of performances in other cities, such as a group of gay people in Miami. If you didn’t know what went into the making of these pictures, they might not hold much interest. Context matters.

Owens says he is performing for the camera as much as for the audience, and that he is interested in the photograph not as documentation but as a primary work. But despite his assertion that his images are not documentary, they serve as mere stand-ins for the powerful performances they capture.

Those performances, Owens explains, are intended to reveal things we have in common with others, to help audience members realize that we share many thoughts, feelings and secrets.

Better known as his alter ego, “Hennessy Youngman,” Musson makes videos he calls “Art Thoughtz” and posts them on YouTube. They usually involve Musson, in “street” character, talking to the camera about various subjects, such as “How to Make an Art” and “How to Be a Successful Black Artist.”

It’s a clever device to poke fun at the establishment, of which, with an MFA from the University of Pennsylvania, he is very much a part. His often hilarious videos also address important issues like race, identity, money and stature. By posing as a simpleton, albeit a well-informed one, he’s able to ask tough questions the establishment likes to ignore. For his artist talk on September 6 at the Contemporary, Musson will be interviewed in character as Youngman.

My personal values prevent me from liking art that involves the killing or mutilation of animals, so Laura Ginn and I were already off to a bad start. As an experiment in self-reliance, she learned how to skin animals and tan their hides. On view in the gallery are an array of pelts and photographs of this process, including bloody animals — raccoons, deer and other critters — in various states of undress, strung up or stuck on poles to let the blood drain.

Despite my qualms about her subject, her project is admirably cohesive. And it’s the only one that looks straight out of “Deliverance.” As part of the show, Ginn conducted a rat-skinning workshop on July 15. I had no interest in attending, but some people no doubt were thrilled to learn this skill. (For the July 25 opening of Ginn’s current show in New York, guests could pay $100 to dine on rats, with the artist hosting in a rat-skin garment.)

Then there’s Anya Liftig, of the recent overlong peanut butter performance organized by Flux Projects, which had many audience members rolling their eyes and asking, “huh?” Among Liftig’s works on view at the Contemporary is a video of a yucky performance that involved her dancing with, stroking and tonguing a large fish, then gouging out its flesh, putting it in a blender and drinking it. I’d feel ridiculous trying to impart meaning to this piece.

Liftig counts slapstick humor among her influences, and it shows. Her performances are punctuated by hammy theatrics that actually seem to mock the genre itself. At the panel Liftig quipped, “I’m more than a little crazy, and this is a safe way to be crazy.” Ginn added that her therapist would be a lot more concerned if her actions weren’t presented in an artistic context. Context matters, but it isn’t an excuse.