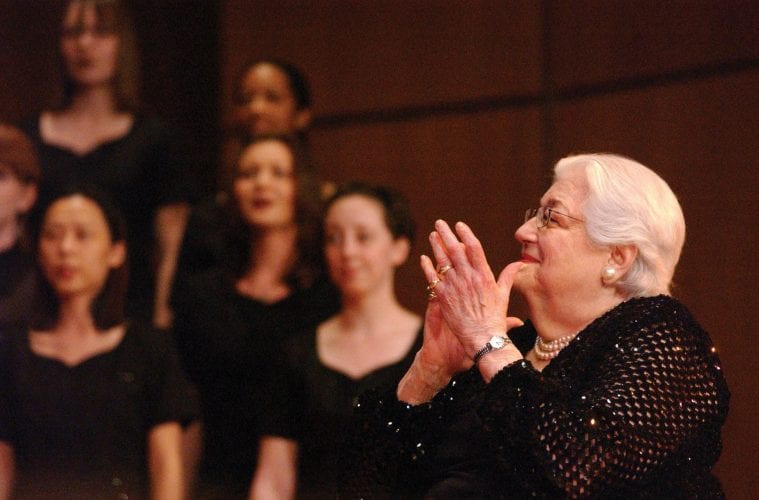 Florence Kopleff at her beloved Georgia State University, in the recital hall that bears her name.

Florence Kopleff, the renowned American contralto, died of complications from diabetes Tuesday morning at Hospice Atlanta, where she had resided since April 30. She celebrated her 88th birthday on May 2.

Born in 1924 in New York City, Florence Kopleff’s early musical experiences included singing in her high school glee club, singing solos and performing roles in Gilbert and Sullivan operettas. Not anticipating a career in music, she developed secretarial skills in high school that would prove a valuable asset when she became a professional singer. In 1941, while still a senior in high school, she met choral conductor Robert Shaw when she auditioned for his newly formed Collegiate Chorale. “I’ve been associated with him ever since,” she was quoted as saying in 1998, less than a year before Shaw’s death.

When the Robert Shaw Chorale was formed in 1948, Kopleff was selected as one of the choristers. It was there that she began to develop a reputation as an alto soloist. She also put those office skills to work as the chorale’s secretary, organizing schedules and maintaining records of attendance. And while on its first international tour, when the tour manager abandoned the chorale in midstream, she took charge of the daily finances, from doling out per diem money for meals to making payments for accommodations.

She made her New York solo recital debut on May 25, 1954, in Town Hall, accompanied by pianist John Wustman. The next day’s review in The New York Times called it “a debut of considerable distinction.” The review described her voice as having “a wonderful ringing sonority, evenly produced over a wide range” and being “an unusually fine and expressive instrument.” “She was one of the great voices of the 20th century,” says Michael Palmer, who was a 22-year-old associate conductor of the Atlanta Symphony Orchestra when Kopleff came to Atlanta in 1968 as artist-in-residence at Georgia State University. “She was a true contralto. She was one of those artists who possessed such an amazing instrument that when you heard that sound, you knew it was Florence. You didn’t confuse it with anyone else. Her personality, the person that was Florence, came through in the quality of her vocal tone and in the beautiful artistry, her gorgeous phrasing.”

Many point to the “Agnus Dei” from the Grammy Award-winning recording of J.S. Bach’s “Mass in B minor” made by the Robert Shaw Chorale for RCA Victor in 1960 as one of her career high marks. “You will never hear it more beautifully sung,” says Palmer, who returned to Atlanta in 2004 to become director of the GSU orchestra, in part at Kopleff’s urging.

“We were dear friends since the beginning of my professional career,” Palmer recalls. “I learned so much from her all through my development as an artist and as a person. She was a warm, outgoing, loving human being; she embraced fully her relationships with other people — one of the things which also made her such a great teacher.”

Most significant was her ongoing professional relationship with Shaw. When he became music director of the Atlanta Symphony Orchestra in 1967, it was Thomas Brumby, chairman of what was then GSU’s Department of Music, who made it possible for Kopleff to follow Shaw to Atlanta the next year as the first artist-in-residence, not only at GSU but for the entire University System of Georgia.

Kopleff acknowledged the profound influence of Shaw upon her life and career and was quoted as saying, “He made me the human being that I am.” But her solo career went well beyond the reach of Shaw’s baton. She performed and recorded the great oratorio literature with other luminary conductors such as George Szell, Charles Munch, Fritz Reiner, Eugene Ormandy, Jean Martinon and Maurice Abravanel.

“I was struck by Florence’s deportment on stage, even before I joined the ASO Chorus,” says longtime friend John Cooledge. “Florence would sit whenever she was not singing and look straight at the other soloists who were singing, or at Shaw himself, with absolutely riveted concentration. It was like there was nothing else she could possibly have wanted to do. She was absolutely rapt in her attention to what was going on musically.”

“Of course the people in the chorus really loved her,” says Nick Jones, another longtime ASO Chorus member and a former program annotator for the ASO. “She became so involved with the chorus, even more so after Shaw’s death. She would finance meals between the two Saturday Christmas concerts, for instance, and was the voice teacher for many years of the ASO Chorus’ voice classes. They got to work with a really great singer and teacher.”

Just as Kopleff became over time a kind of “chorus mother” to the body of ASO Chorus singers, over her three decades at GSU she taught hundreds of vocal students. For many, she became a friend and caring mentor. In acknowledgment of her educational impact, the university honored her with the Alumni Distinguished Professor Award in 1982.

In 1984 Kopleff established a scholarship, and she has left a bequest to support vocal performance at Georgia State through her estate. She retired from GSU in 1998, and in 2004 the renovated 400-seat recital hall at the corner of Gilmer Street and Peachtree Center Avenue was renamed in her honor. She never married, and noted herself that she had neither family nor business to leave as legacy. “So my music, which is my life’s work, will be my testament,” she said.

A note to readers: A single article cannot fully pay tribute to the life of an artist who touched as many people as did Florence Kopleff.  ArtsATL encourages readers to contribute their own memories and stories in the Comments section below.