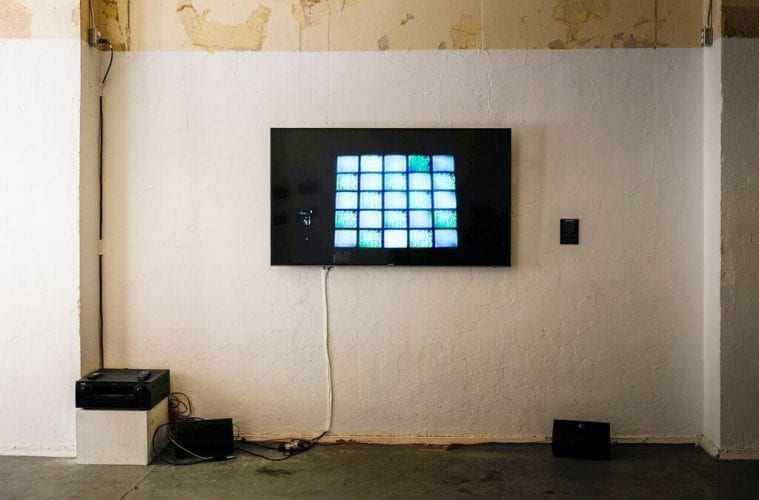 What does it mean for an app, a video game, or a YouTube supercut to be artwork? As with photography and video, new ways to make and consume images always shift the boundaries of art itself. While new media art is hard to define, it always draws on up-to-the-minute materials and technology; witness the endless hype about virtual reality, which seems to be always almost-here. More Light, which was curated by Kristin Juarez and Gregory Zinman, timed to coincide with the annual meeting of the Society for Cinema and Media Studies, brings together a host of mostly local new media artists and practices. While successful in highlighting the enormous diversity of work being produced in Atlanta, the show also invites tough questions about the trends and currents driving the expanding field of media art.

The paradox of “new” media art is how much of it is perversely suffused with adoration for aging and obsolete gear. Anna Spence’s New Radiant (2014) wears this backwards-looking influence proudly. Displayed on a wood-paneled cathode ray TV arranged in front of a sofa and end table straight out of a 1970s den, the video’s dynamic, camcorder-generated abstract patterns, overlaid with grainy VHS static, harken back to decades-old antecedents reminiscent of the pioneering analog and digital experimentation of Lillian Schwartz. Spence’s video is an homage to the look and feel of these works, but it doesn’t go much beyond affectionate mimicry.

The copycat attitude also extends to content. Mashups and supercuts, the memetic video currency of the internet, are driven by the obsessive desire to collect and master their sources. They range from the whimsical to the encyclopedic, occasionally rising to ambitious new creations. Marcus Rosentrater’s Star Wars Wars (2015), which swept across the sci-fi web late last year, falls squarely within the middle category. By blending layers of the first six Star Wars movies, Rosentrater created a film that shows all of them running, superimposed, at the same time. The meticulously crafted result is dreamy and full of surprising juxtapositions, like a visualization of the free-floating cultural memory image of the franchise. Conceptually, it has affinities with both cut-ups and Kenneth Goldsmith’s “uncreative writing.” At the same time, this is admittedly a production rooted in fandom, not a critique of the ways that Star Wars looms imperially over the pop-entertainment landscape.

Beyond the appropriation of mass art, there’s the question of whether some new media, such as video games, can achieve the status of art at all. Usually this debate centers on market-tested entertainments like Mass Effect 3. It’s less obviously an issue for the web-based gamelike things Cameron Kunzelman makes, collected online at heylookatmygames.com (2013-15). While these borrow the interfaces and motifs of old-school console games, they do so mainly to comment on the tropes of gaming and to evoke feelings of annoyance, futility and failure. To give a sense of the mechanics: in the side-scroller Oh No the player must hit one of three keys to avoid being consumed by the giant, inexorably pursuing head of Michel Foucault. Others, like My Rage Is a Cloud That Will Cover the Earth, are exercises in cathartic repetition. These intentionally dour and unwinnable antigames fit comfortably within the lineage that runs from the legendarily unendurable Takeshi no Chousenjou (1986) to the “irresistible Sisyphean nightmare” of Devil Daggers (2016). Two shining spots are Funeral and Kunzelman’s venture into interactive storytelling, Slavoj Zizek Makes a Twine Game—once past the grad-school cleverness, the quotes and bent logic start to accumulate into something both sinister and sad (the latter also name-checks Porpentine, one of the most original voices in gaming today—see her collection Eczema Angel Orifice for proof).

Although Robbie Land’s work is ultimately shown on film, the elaborate process behind it requires creating a new medium tailored to each piece. For Grant Park (2015), videos shot in the park were combined with an old science documentary about photosynthesis, then contact printed as stills onto actual leaves also collected from the park. The greenish tint and visible veins in the background of each frame give the images themselves the striking illusion not just of motion but life. They are biologized both in terms of material and also through the historical roots that tie them to their places of origin. Even the creation of still images can be problematized. Taking a funky, homebrew approach, Mark Leibert’s Traces (2016) creates a slightly fuzzed abstract picture by shining colored beams from three simple wooden lightboxes onto a linen sheet. Their soft-edged overlap resembles a watercolor, and the whole apparatus has the feel of a backyard movie projection setup. Christina Price Washington’s More Light (2016) is chilly in contrast with the domestic warmth of Leibert’s work. Washington’s installation is composed of a massive Fiilex light fitted with a parabolic softbox that stands almost flush with the wall. A bright corona flares around its edges, and if you press your face right up against the gap, you can see a single mercilessly lit piece of photographic paper tacked to the wall. The near-contact between light and paper puts a mocking spin on the notion of photographs as pure physical traces, emphasizing the unbridgeable distance between image and world. For Washington, photographs are born untouched in a void. Leibert, in contrast, revels in these tiny imperfections, and his work encourages viewers to step into the projected beams, fracturing them into their separate colors.

On the subject of flaws, I should add that the quality of the installation is sometimes ratty. Several pieces were inexplicably crammed into easy-to-miss corners, and Micah and Whitney Stansell’s superb Scarlet Air (2014) was projected onto concrete walls pocked with holes and layered with old paint, turning their delicate imagery into an unintentionally glitchy viewing experience. The artists and their work deserve more attention to detail. It’s fitting that in an exhibition so steeped in the past, one of the central works is one that no longer exists, Dara Birnbaum’s Rio Videowall (1989), which is present only in the form of video documentation and wall text. The piece formerly existed as part of the Rio shopping complex, designed by the firm Arquitectonica for Charles Ackerman & Co. developers. Built in 1988, it was located at the intersection of Piedmont and North Avenues. Birnbaum’s installation, reported as being the first large-scale outdoor video art installations in the United States, was a 5-by-5 grid of monitors linked to two motion-sensitive recorders. The default image shown on the huge screen depicted the magnolia-filled park that formerly occupied the site of the mall. As people wandered through the plaza, their silhouettes were captured and projected onto the monitors as moving outlines filled in with a stream of live video images taken from CNN. Shoppers were transformed into flattened, information-saturated figures wandering blindly through the ghost of a landscape.

Rio Videowall was always ambiguous as a social critique, since its interactive nature relied on the presence of people showing up to spend money. The fate of Birnbaum’s installation is also a cautionary moral about the transience of shiny new techno-art, especially when tightly integrated with commerce. Despite early accolades for its kitsch-accented design, the mall struggled financially, and after several waves of closings and changes of ownership it was demolished in 2000. In its last days, the enormous display — often inert and dark — was used by a bar to show sports events.

This tale, I think, goes some distance towards explaining why so much new media art is mired in nostalgic reverie, despite its patina of geekish futurism. Cultural history suggests that “the look of now” tends to age badly. This is no less true in technology than in fashion and hairstyles. Any new style or medium runs the risk of being obsolete tomorrow, discarded and bulldozed under like the Rio Videowall. The embrace of the past is safe insofar as it offers an escape from our own potential obsolescence. Better to stick with the time-tested things: corded telephones, VHS static, clunky 8-bit graphics, sci-fi films from childhood. In the end, though, this defensive conservatism is always in vain. Even Birnbaum’s monumental Edenic vision of the past is now just another drugstore parking lot.