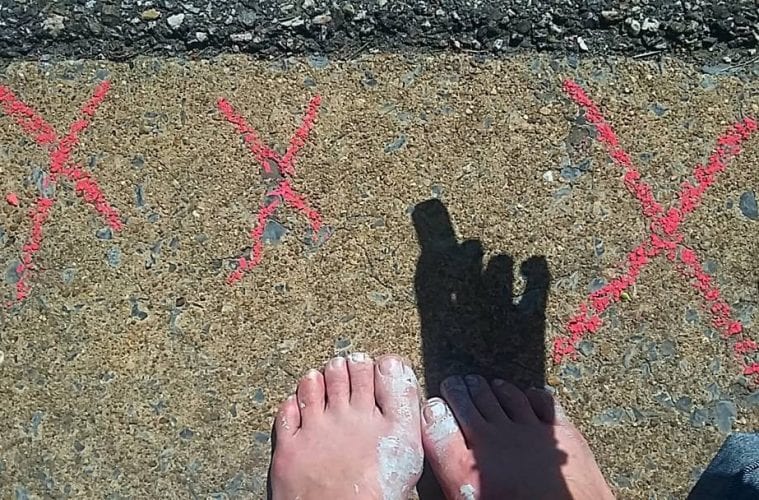 Trigger Warning: This article contains information on sexual assault and may be triggering to survivors.

If the name Jessica Caldas sounds familiar to you, it could be because you’ve recently read her op-ed in the Atlanta Journal-Constitution in support of HB 827 titled, “Pursuing Justice for Rape Victims Bill.” Caldas, an Atlanta artist and activist with creative residencies at Atlanta Printmakers Studio and WonderRoot under her belt, has long focused her work on gender-based violence. Her project in October 2015, the #3everyday project, used public performance art to spotlight domestic violence victims and encourage education and prevention. This April she will be re-launching her 2015 project for Sexual Assault Awareness Month, titled  #every107seconds for the rate at which someone is sexually assaulted in the U.S.

Her newest show, titled Love/d & Sex/ed, opens at Mammal Gallery on April 14th. Rather than a repeated public performance, the series will be a collection of panels, workshops, performance and visual art centering on love, sex, the body and their intersecting complexities. While the gallery will feature work solely by Caldas, the three days of group work and performance art (“conversations,” as they are described on the event page) will showcase artists such as Estela Semeco, Grace Thornton and Angela Davis Johnson, as well as other artists that Caldas knows personally or through joint endeavors. The remaining artists, she states, were recommended to her from those already involved in the project. “A lot of people [were] sending me emails and saying, ‘Hey, I think you should ask this person,’ or, ‘check out this work,’ or whatever,” says Caldas. “I don’t know about half of them as well, which is pretty cool.” Caldas affirms that in the past this type of hands-off collaboration has led to a unique, community-building experience which she aims to replicate. Caldas’ emotionally charged “Reframe” during a performance at Downtown Player’s Club in December.

When asked about her goals for Love/d, Caldas makes sure to reiterate the need for open and honest communication. “In general, it’s the same goal I have with most of my work,” she says. “Education, awareness and then just generally to create a space for conversation around things that are not typically spoken about.” Gender is among the frequently taboo topics being addressed at the event. To that end, Stephanie Kong will be workshopping the story of Deconstructing Binaries, a public art project done through Wonderroot which challenged mainstream binary restroom signage and promoted gender inclusivity. Addressing assault, artist Aida Curtis is planning a movement-based performance surrounding violence on the body. The vast majority of artists haven’t disclosed their plans to Caldas, making Love/d largely experimental. Caldas hopes that creating a space to flesh out delicate, often restricted topics will point attendees toward action in the future.

The event boasts an extensive list of participants and topics, but Caldas’ performance is achingly personal; it will take place on the 10th anniversary of her rape. Love/d was initially a separate idea, but with panels on consent and the body in space already on the docket, the anniversary performance fell naturally into the fold. Caldas thinks her recent advocacy on behalf of victims has been helpful in preparing her for what is sure to be an emotionally-draining experience. “I wrote this op-ed about it and did all this lobbying and advocacy for this bill, which I was not planning to do,” she says. “It’s kind of brought me into the right space, I guess.”

The anniversary will be her only performance, but Caldas is also participating in a panel on healthy vs. toxic masculinity. She believes relating masculinity to the overall conversation of the event is vital. Soul Food Cypher, a group for Atlanta rappers and lyricists which seeks to showcase and spread the art of freestyling to all corners of the creative community, will be a major highlight of the panel. Other artists will have men in their performances, but Soul Food Cypher is the only group of men invited by Caldas herself, to ensure that women are well-represented throughout the show.

The heavy emotional weight of Love/d leaves room for strong and varied reactions. Caldas tries to avoid setting expectations and instead opts for caution. Security will be present on all three conversation days with the dual purpose of protecting performers and getting newcomers up to speed when they arrive. An “Emotions Monitor” will be charged with offering assistance, such as a quiet space or a glass of water, to anyone who may be triggered by the performances. Caldas says the event descriptions are detailed enough for people to know what they’re walking into, but is glad to have an aid for everyone to practice self-care, just in case.

It seems fair to say, ten years ago an event delving into rape culture and toxic masculinity may not have been as accessible as it is now in the social media era. Caldas, a champion of hashtag movements, credits our growing openness to our connectivity. “I just see more and more of this kind of conversation happening in different ways and different varieties, which is awesome,” she says. “Atlanta is just open to it. We have a pretty open culture in our city — not our state as much. But you know, if you live in the heart of the city, that’s what it feels like.” She aspires to keep the dialogue moving between artists, organizers and attendees with Love/d’s amalgam of performance and education. “One of the great things about making work about these issues,” Caldas says, “is you’re really creating a different way to look at them, understand them, perceive them and hopefully put them back into the world.” Ultimately, Love/d seeks to find the heart of the matter and, most importantly, keep us all talking about it.