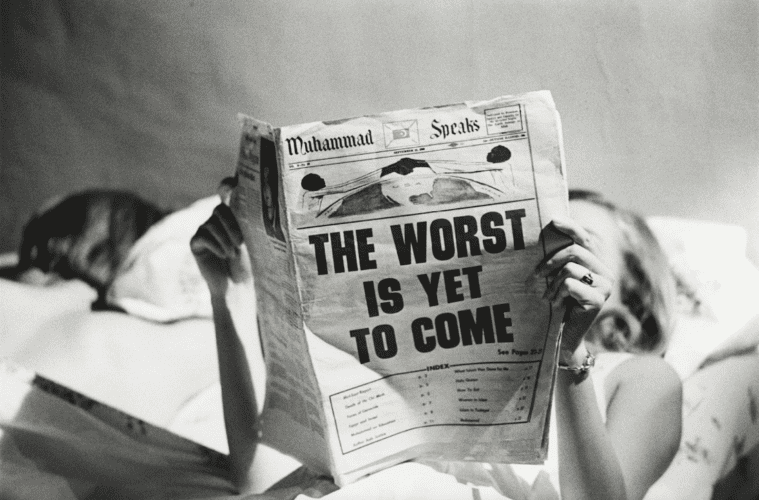 Review: Sheila Pree Bright, Steve Schapiro photos connect the past with the present

When you walk into Jackson Fine Art Gallery in Buckhead, look immediately to the right and you’ll see a Steve Schapiro photograph taken in 1968. It shows a woman lying in bed reading a newspaper. “THE WORST IS YET TO COME,” the headline shouts, words that feel foreboding then and now. But if the past is pretext, we know that as a nation we have survived our worst days thus far.

Curators at Jackson Fine Art Gallery reflect on some of those difficult days in a double photography exhibition, Steve Schapiro: In Celebration of the Fire Next Time and Sheila Pree Bright: #1960Now. Both are on view through September 19.

Schapiro, a New Yorker who is white, traveled with author James Baldwin throughout the American South as civil rights protesters prepared to march from Selma to Montgomery. From his Harlem home, he accompanied Baldwin into North Carolina, Alabama and Mississippi. The exhibition is, in fact, named for Baldwin’s 1963 novel The Fire Next Time. Schapiro’s images illustrate the text in the exhibition catalog. Similarly, and 50 years later, Atlanta’s Pree Bright traveled to Baltimore and Ferguson, Missouri, and back to Atlanta to capture images at Black Lives Matter protests from 2015 to 2017. Her work, under the hashtag #1960Now, has been exhibited widely and includes a collection of photos of Black women whose unarmed sons have been killed by police or civilians in states with Stand Your Ground laws (those are not on view here).

The Jackson Fine Art exhibit includes protest images and a short film that Pree Bright created from people she spoke to and things she witnessed at protests. She splices in historical footage of Malcolm X, Nina Simone, James Baldwin and other civil rights leaders.

The exhibit includes a new full-color photo, “The Rebirth of US” taken this year. The blue-tinted portrait features a woman surrounded by bright yellow sunflowers — one for each of the 29 Black children killed from 1979 to 1981 in what’s known as the Atlanta Child Murders. Atlanta Mayor Keisha Lance Bottoms reopened the cases after more than 30 years, and the investigation is the subject of the HBO docuseries Atlanta’s Missing and Murdered: The Lost Children. If there are any complaints here, it’s that Pree Bright’s photos are confined to a small space with Schapiro’s in rooms on either side. It would’ve been preferable to see them comingled side-by-side to really connect the dots between past and present. Also, Pree Bright’s new photo punctuates the exhibit but is also somewhat hidden.

It takes a lot of daring to go into a civic uprising, no doubt, and that’s not the only way in which these artists are similar. Both have an affinity for black-and-white photography. Schapiro is so close to marchers that you can see tear stains on cheeks and saliva settling on teeth. Pree Bright is also up close, but where Schapiro’s images are striking for the sharpness and brightness, hers depict the chaos. The irony and symbolism of Black men disarming themselves to society by raising their arms but needing a certain mental and spiritual armor to survive in the world, isn’t lost on either of them.

The timeliness of these exhibits is hard to deny. There have been Black Lives Matter protests calling for police reform, jobs, clean water and equitable access to health care in cities across America for the six months and counting. As much progress as the United States has made in race relations, the overlap between what people marched for in 1963 and are marching for now, is undeniable. In 1955, Emmett Till was falsely accused of whistling at a white woman. In 2020, Ahmaud Arbery was falsely accused of breaking into a house while jogging. The callous indifference to the sanctity of human life is, simply, sad.

Fifty years ago, protesters held signs that proclaimed “I Am a Man.” Today, the signs says “Hands Up. Don’t Shoot.” Then and now, crowds cry “No justice, no peace!” Schapiro and Pree Bright encompass the anguish in these photos but also an indelible hope. People protest because they believe in a better tomorrow, and these gifted artists want to ensure they see it.