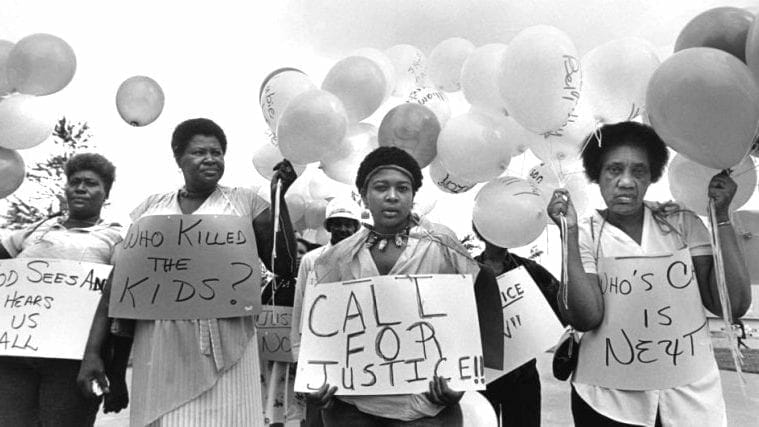 Some 30 children and young adults were murdered in metro Atlanta between July 21, 1979, and May 21, 1981. A new documentary recalls the grief, confusion and anger in the years Atlanta's lost its children.

Review: HBO’s “Missing and Murdered” puts tragic chapter in Atlanta back in spotlight

It seems so long ago now, but the first episode of HBO’s five-part documentary series Atlanta’s Missing and Murdered: The Lost Children brings the city’s tragedy back to immediate emotional life. The immensity of the sorrow of these parents, siblings and friends is overpowering, and it’s shocking to recall how tentative the official response was when the first murders began in 1979.

The first two episodes of the riveting, disturbing series aired April 5 and 12, respectively, and are available to watch on HBO and HBO Go. The remaining three episodes will air at 8 p.m. each of the next three Sundays. The series is only the latest recent focus on the story in the media. The 2018 podcast Atlanta Monster centered on the killings, which also played a significant, dramatized part in last year’s season of Mindhunter on Netflix. A calamity the city seemed intent on burying 40 years ago is resurfacing in force.

One driving reason for renewed interest is Atlanta Mayor Keisha Lance Bottoms’ decision to reopen the cases and re-examine all available evidence.

The expansive cast of talking heads includes Bottoms, former Mayor Shirley Franklin, plenty of federal and local agents (with clashing viewpoints about how the murders were investigated and how Wayne Williams’ trial was conducted), and former TV journalist Monica Kaufman Pearson. Still a young WSB reporter when the killings first blossomed, she has a unique, skeptical perspective on the times, and believes that re-examining all the evidence in the case might “do what should have been done in 1979, 1980 and 1981.”

We also get interviews, from prison, with Williams himself, though there’s nothing revelatory there. His defense attorney, Mary Welcome, is also on hand, recalling that, though Williams was a difficult client who “made me pissing angry” and that “while he was a lot of things, I never saw a killer.”

The real hero of Missing and Murdered, as was her dramatized counterpart in Mindhunter, is Camille Bell, featured in interviews from the times. (Whether she is still living, the documentary doesn’t say, nor does it feature new interview footage, unless I somehow missed it.) Bell tirelessly channeled the grief over her murdered 9-year-old son, Yusuf, into a campaign of speaking to power about the children whose deaths, as poor black youths, were not being taken seriously. As Mayor Bottoms says in the film, “You think about the attention that’s given now when a child disappears.” Of course, white, blond victims like JonBenét Ramsey still reap the greater bounty of media attention.

The documentary feels, to me, pretty comprehensive and exhaustive — but not exhausting. I’m not rehashing any of the bendy factual twists and turns that attended the three years of murders and work by law enforcement (which was alternately admirable and deeply suspect). See it, or remember it, for yourself. Camille Bell’s 9-year-old son, Yusef, was found dead November 8, 1979. Her anguish drove her to seek justice. She organized the Committee to Stop Children’s Murder and became its chair.

The final episode, or at least the provisional edit that I watched, shifts into a couple of other theories behind the murders. Even if you think Williams may have been involved in some of them, very few would pin the blame on him for killing all 30 children and adults, many of whom didn’t fit the same victim profile.

Missing and Murdered credibly aims a spotlight on a couple of other possible factors: a pedophile ring and the long-suspected involvement of Ku Klux Klan members. The fictionalized take of the tale in Mindhunter brought in the KKK angle, but landed pretty firmly on the notion that Williams was the killer and that the FBI did a thorough job. Missing and Murdered convincingly suggests that Williams may well have been a convenient scapegoat to allow the City to Busy to Hate to get back to its sloganeering and economic boosterism.

After five hours, you come away with only more questions about the killings, not fewer. That’s not a criticism. It just reflects the reality. Directed by Joshua Bennett, Maro Chermayeff, Jeff Dupre and Sam Pollard, the documentary series can’t provide a sense of closure for the tragedy.

After all, as one mother puts it, “I don’t know what constitutes ‘closure’ for a murdered child.” For any Atlantan — longtime resident or recent arrival — Murdered and Missing is a vital education for anyone interested in a pivotal, incredibly volatile moment in the city’s history, one that still haunts and informs our present.