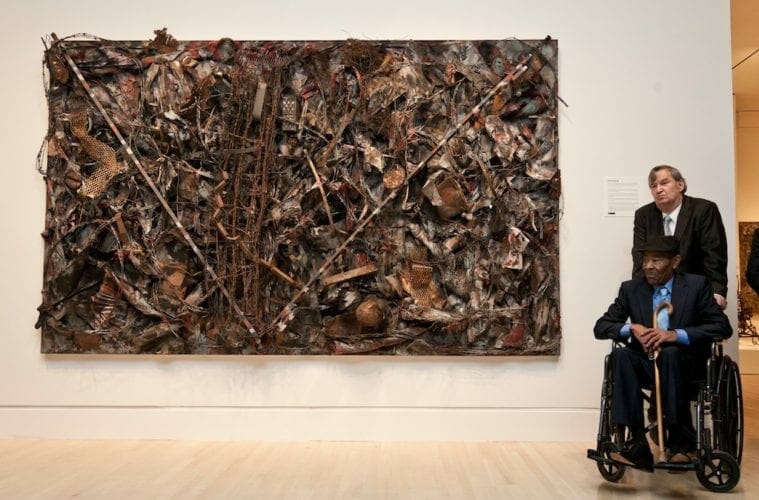 Bill Arnett with Thornton Dial in 2011 at the "Hard Truths" exhibit in the Indianapolis Museum of Art.

The first obituary published during my two years as ArtsATL editor was of Thornton Dial Sr., who died shortly after I took the job in 2016. Thank God for Jerry Cullum, who did an impeccable job bringing into light the impact and importance of Dial in the landscape of great art. “The evolution of such an extraordinary oeuvre from such outwardly adverse circumstances over the 30 years of his public career,” Cullum wrote, “is testimony to this remarkable man’s inner qualities beyond any illustrative anecdotes I might have been able to offer.”

When I learned that Bill Arnett had died on August 12 at age 81, I couldn’t help but think of Dial and his son, Richard Dial, and of Lonnie Bradley Holley Sr., of the women quilters of Gee’s Bend, of Ronald Lockett, Charles Williams and so many other artists whose creations were incorporated into our social consciousness through the “assiduous advocacy” of Bill Arnett. 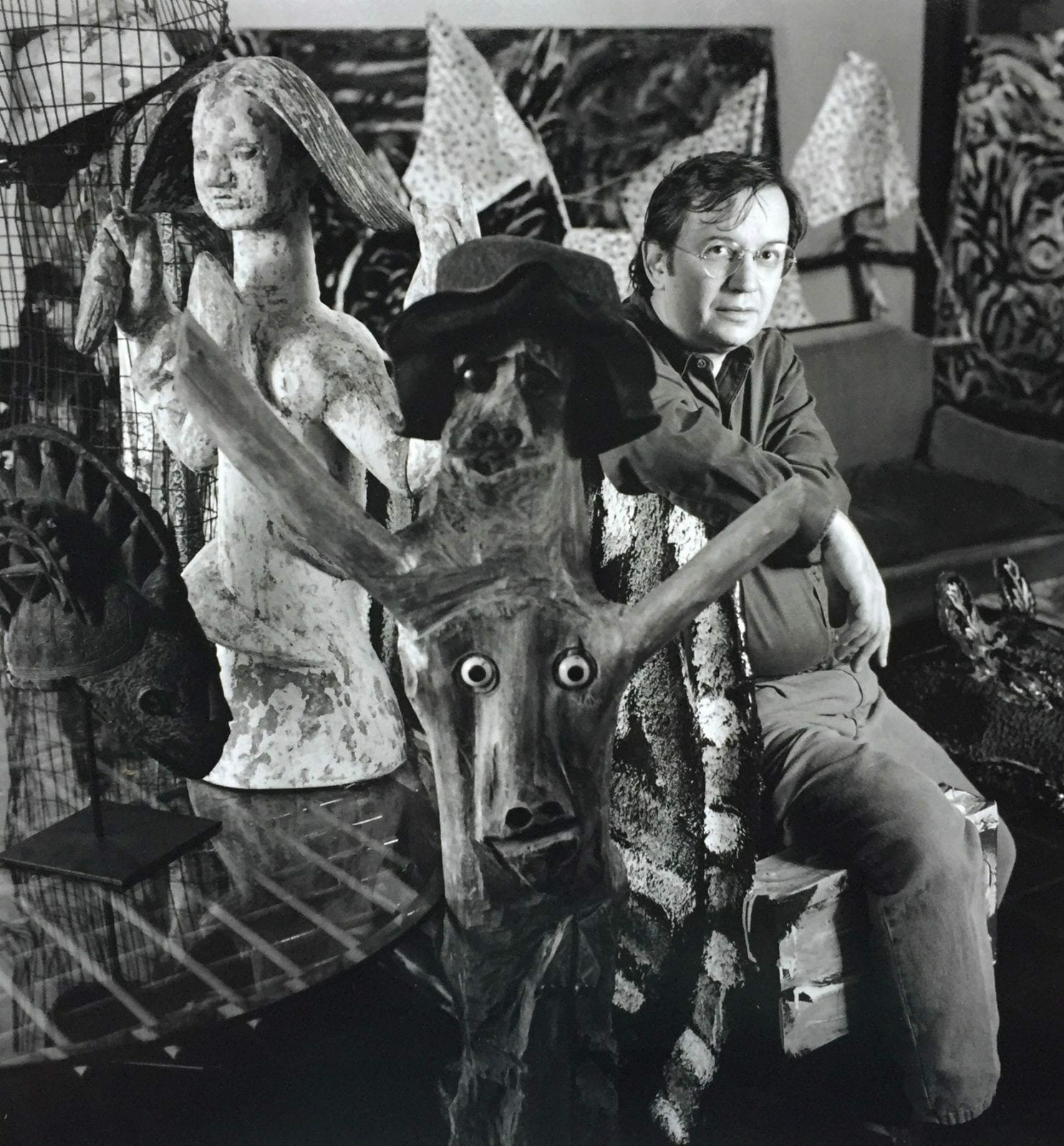 Bill Arnett’s love for vernacular art was sparked by his early love for Black music.

The lifelong activist, patron and scholar is best known for his work on behalf of what he called Black “vernacular artists” from the South. This was work created largely by self-taught artists who were mostly ignored by major American museums. Arnett brought innumerable artists into the mainstream. He founded the Souls Grown Deep Foundation in 2011, which has placed works by more than 100 artists in some of the country’s most esteemed museums and art collections.

Arnett was a lot of things to a lot of people. What we must thank him for is a breathtakingly enlivened and enriched artistic canon. “As one who loved history, and as a man who grew up in the South, Bill got it all, and he could not get enough,” said scholar Alvia J. Wardlaw, curator and director of the University Museum at Texas Southern University. “He wanted the world to get it. And ultimately, they did. And that was the gift that Bill gave to all of us — an expanded canon, a very real take on creative genius in this young country.”

The Man Who Collected As If He Were From Another Planet

We came to know Arnett for collecting and advocating on behalf of Black vernacular artists, but his holdings were extensive in breadth and scope. Two of Arnett’s surviving sons, Paul and Matt, have much to say about growing up amid their father’s eclectic art collections, which he amassed in travels to more than 60 countries.

“He collected as if he was a visitor from another planet,” said Paul Arnett. “He wasn’t just committed to the known. He was interested in how art was a part of people’s daily lives — textiles, ceramics, architectural elements — all facets.”

The rooms at his Buckhead home were filled, each like an individual gallery or storage space, each highlighting a certain culture or group or region. Painter and collagist Benny Andrews was represented as were Nigerian artists Twins Seven Seven and ZK Oloruntoba, and South Carolina painter Sam Doyle, alongside tapestries from Asia, Africa and the Americas, and sculpture from Asia, Africa, the South Pacific and the American South.

“Every room was a revelation,” said Matt Arnett. “There wasn’t really a hierarchy.  If it was great, it had a place. I think we learned early on in our lives that great art could come from anywhere and be made by anyone.” 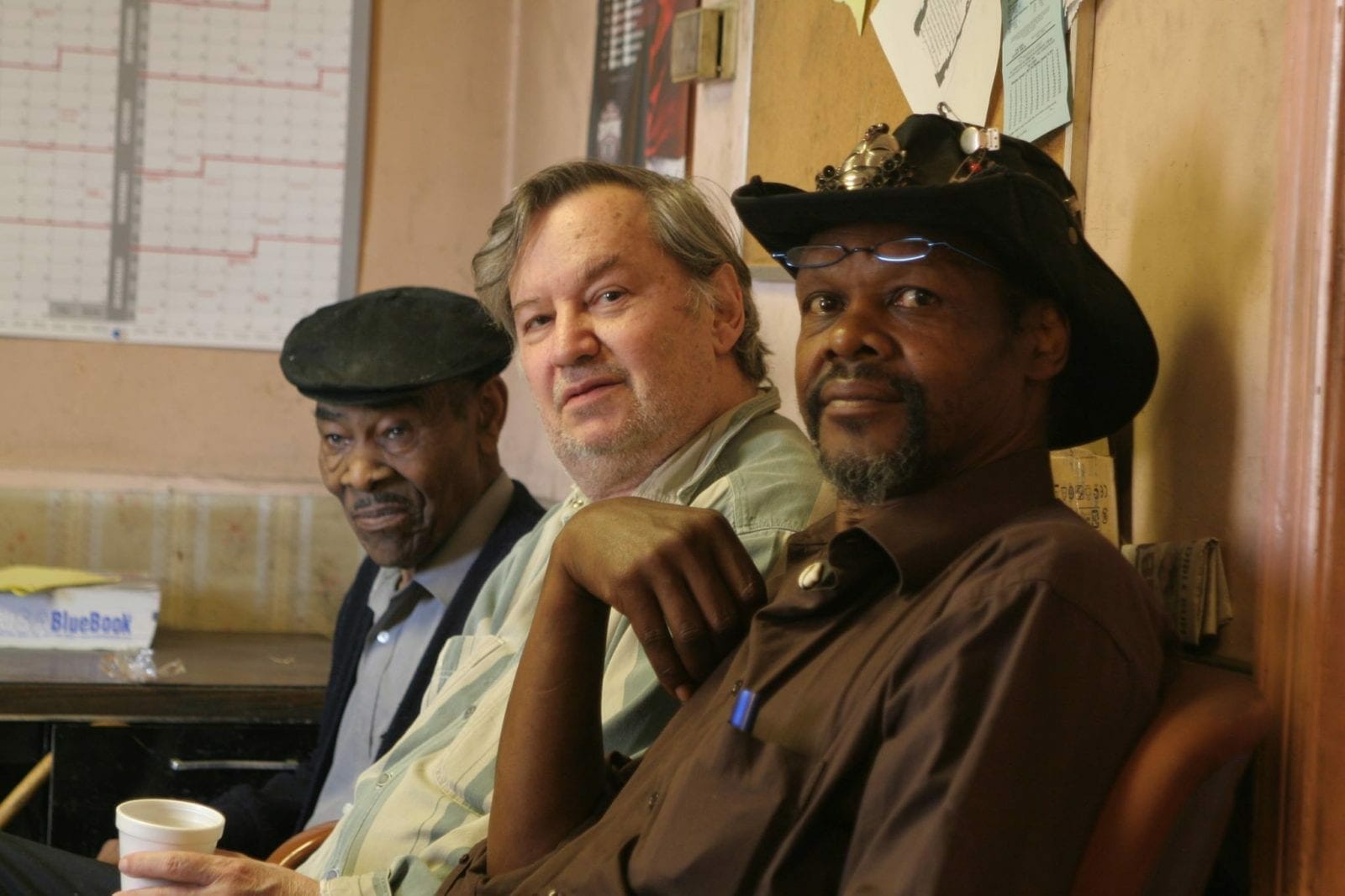 Arnett was born William Arenowitch to Hilliard B. Arenowitch and Minna Moses Arenowitch in Columbus, Georgia, in 1939. His father owned a dry goods company and supported his son’s early interest in the arts. As a teenager, Arnett would venture through then-segregated Columbus to listen to Black musicians. He developed a lifelong, encyclopedic knowledge of that music, which would eventually blend into his lifelong passion for the arts.

While in college at Georgia Tech and the universities of Pennsylvania and Georgia, Arnett became attached to art and its history. When he got a job with a London bottling company, he began spending his spare time traveling with his brother, Robert, throughout Europe, the Middle East, South Africa and Asia. It was about this time the brothers changed their last name to Arnett.

By 1964, Arnett had joined the Air Force and married high-school sweetheart Judy Ann Mitchell. A few years later they settled in Atlanta and had four sons. He and Robert became art dealers and collectors, focusing their attention on non-Western civilizations. The Arnett home soon brimmed with artwork and bubbled with visiting artists and collectors from all over the world.  “If you wanted to visit, our house was open,” Matt Arnett said.

Let them tell their stories

Arnett’s traveling slowed as he grew older, and his lifelong love of African American music evolved into a hypothesis about visual art. “You didn’t have great art without other aspects of culture. It doesn’t exist in vacuums,” said Phillip March Jones, the artist, writer and curator who became the inaugural director of the Souls Grown Deep Foundation. “When you think of the history of modern music and the evolution of gospel to blues, jazz, hip-hop and rock ’n’ roll — you unearth an entire history of African American music. Bill was interested in the visual counterpart of that and went out to find it.”

Arnett found what he was looking for in 1986, when he crossed paths with artist Lonnie Holley. From that point on, his collecting gained a laser-like focus. “My dad recognized there was no system in place for the preservation, documentation and education of this work,” said Paul Arnett. “It became his mission. He didn’t know he was about to step off a cliff.”

When Arnett discovered Holley’s art, he’d sometimes bring busloads of visitors to the one-acre plot in Birmingham, Alabama, a plot filled with artwork made of sandstone, found-object sculptures and paintings. “What Bill was interested in was something different,” Holley said. “It was not like he was interested in us because we were doing some type of art. He was interested in the traditions and the more sacred parts. Each one of us that Bill collected from had something going on in our growth that affected the nation and was part of the nation.” 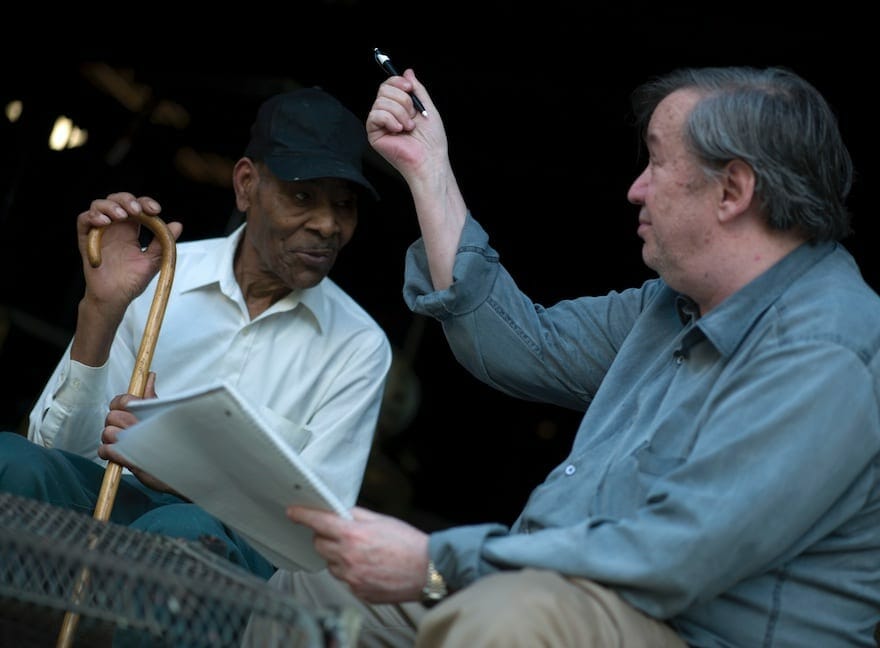 Bill Arnett provided financial support to artists such as Thornton Dial, so they could focus on making their art, not earning a living.

Arnett’s ardent passion extended to Black artists throughout the South, including Thornton Dial, Richard Dial, Ronald Lockett and the Gee’s Bend quiltmakers. “He had this vision that he was going to promote our art and get it to the top,” said Richard Dial. “He thought about what the world would say once they could see it. He thought it was one of the most beautiful things he could do with his life and enhance our life.”

Arnett became so passionate about empowering these artists that he’d sell parts of his personal collections and houses to support the artists for whom he advocated. He did so with a weekly allowance. “My dad had been working for a boxcar company,” Richard Dial said, “and got laid off at a time you couldn’t even buy a job. The income was more than we could have achieved on our own. We stuck with him. It was what my dad had needed to supplement his income, which wasn’t a whole lot.”

Within the first decade of his mission to find Black vernacular artists in the American South, Arnett had collected more than 700 pieces. Many became the founding endowment for the Souls Grown Deep Foundation. Some artists, however, met him with trepidation, others were openly hostile, questioning his greater methods and motivations. These allegations came to a head in 1993 through a 60 Minutes segment that focused primarily on Dial but cast an exploitative light on Arnett’s relationships with the artists he supported. The allegations were later debunked in a Washington Post piece.

Arnett’s “primary goals were to remove the economic and social stresses from the artists’ lives so that they could reach their full potential,” art historian Robert Hobbs wrote recently in the magazine ArtNet. He wanted “to acquire a critical mass of work from each individual in order to help establish each one’s merit and to support the claim that this work constitutes an extremely important 20th-century artistic development.”

Texas scholar Wardlaw said Arnett was determined to bring the genius of African American artists to the attention of the art world. “He could sometimes come across as a zealot, but that was because he was uncompromising in his determination,” she said. “With an unstoppable and totally focused work ethic, he accomplished so much of his vast vision.”

Arnett articulated this vision in a 2013 New Yorker article about Dial. “This art wasn’t created to entertain people or to sell to rich people,” he said. “It was created to commemorate the culture itself, so that it could last, so that grandmama could tell grandson, ‘This is what we’re about, child’.” 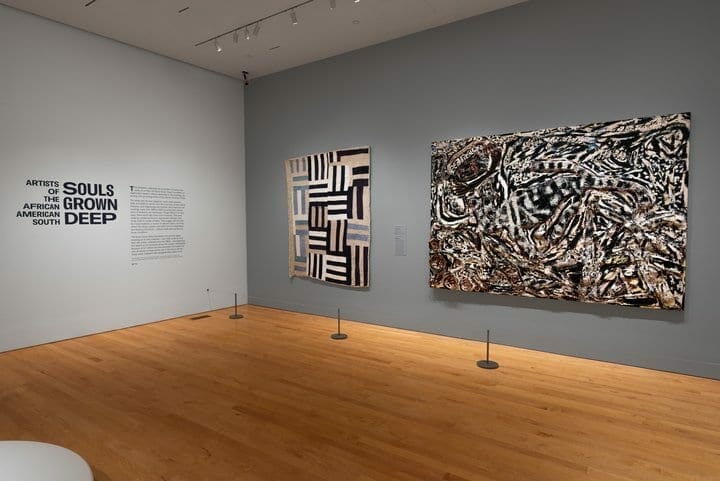 The Souls Grown Deep Foundation has had exhibits at museums across the country, including this 2019 show at the Philadelphia Museum of Art.

Arnett’s contributions include the two-volume Souls Grown Deep: African American Vernacular Art (Tinwood Books, 2000-2001).“When I was a grad student, my adviser plunked Souls Grown Deep on his desk and said, ‘You need to read these,’” Katherine Jentleson, the High Museum of Art’s folk and self-taught art curator, told ArtsATL in 2018. “It was the same for others of my generation. This is a resource that never existed before, and it goes way beyond what museums can do in exhibition catalogs. It includes the artists talking about their art and so many photos of the artists and their works.”

In 2010, Arnett founded the Souls Grown Deep Foundation and established its collections with a donation of more than 1,300 works of art. The foundation has made large gifts to museums across the country, including Atlanta’s High, New York’s Metropolitan Museum of Art, the Brooklyn Museum and Boston’s Museum of Fine Art. What hasn’t been gifted is held in an Atlanta warehouse.

“Bill always saw himself as the driving force behind the ‘movement’ to get the recognition for these artists that they deserved,” Wardlaw said. “ The fact that works are now in the permanent collections of [museums] is a testimony of his vision.”