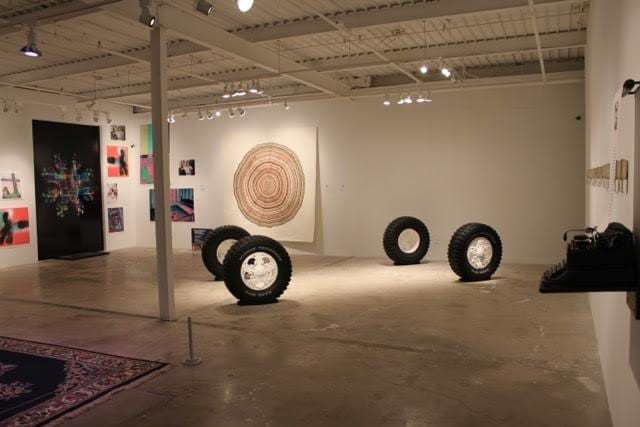 Installation view of Portalism, an exhibition of work by 11 Walthall fellows.

Like a perfectly ergonomic gadget or even a well-formed haiku, the balance of beauty and function is as rare as it is sublime. WonderRoot’s Walthall Fellowship, among Atlanta’s most valuable professional development opportunities for emerging artists, succeeds where most college art programs fail: balancing aesthetic rigor with nuts-and-bolts pragmatism.

Co-created by Executive Director Chris Appleton and former Creative Director Maggie Ginestra, the 12-month fellowship equips its fellows with real-world strategies while also deepening relationships within the broader Atlanta art scene. Artists attend professional workshops with local art leaders, receive informed artistic feedback with personal mentors, lead discussions on the intellectual content of their work and have the opportunity to collaborate with peers across a variety of disciplines.

Each fellowship cycle concludes with a group exhibition at an established local art venue. Portalism, on view at the Museum of Contemporary Art of Georgia through September 12, presents the wide-ranging work of this year’s 11 fellows.

WonderRoot also held a day-long symposium of performances, workshops and various innovative alternatives to the standard artist’s talk, some of which were included during the exhibition opening as well.

This emphasis on the live encounter is Portalism’s strength. As a result, the symposium carried as much artistic content as the exhibit, bringing new dimensions to the stand-alone works and making connections between otherwise disparate creative dialogues.

The result was a surprising smudging of boundaries in how we apply language to our interaction with a work of art. Artist talks, absurdist panel discussions, live storytelling and instructional workshops coexisted on the same verbal spectrum, one fluidly leading to the next, offering unexpected frameworks in which to consider the work as well as the artists themselves.

Dancer and choreographer Sean Hilton, for example, presented Dave 2 during the opening and the symposium, an improvisational dance performance to the tune of audience members’ impromptu storytelling and sharing. If elegance is defined by concision, then Hilton and collaborative dancers Nicole Johnson and Nathan Griswold presented a perfect ratio of beauty and absurdity, low art and high art, accessibility and poetry.

Seth Thompson’s symposium roundtable should be the model for all future artist’s talks. Instead of the standard spoon-fed explanation, articulate Thompson led a dynamic conversation on themes that inform his photographs — quantum physics, the problem of “truth” in photography, childhood in 1980s America — without prescribing singular meaning to individual images.

In this format, Thompson’s cosmic-nostalgic depictions of 1980s American culture coexisted side-by-side with the nearby conversation, one informing the other without forced description or interpretation.

Stephanie Pharr and company delivered the Alice in Wonderland version of Thompson’s roundtable during the symposium with Marry the Binary, a quasi-philosophical serious-absurdist panel discussion on pop-scientific theory, metaphysics and contemporary art. The interactive Dada-style performance detached language from the constraints of convention, rearranging conversational elements to form new meaning, as if they were building blocks to be rearranged on a table.

The work of shaman cowboy Steven Anderson best reflects the concept behind the title — portals as entry points for transformative experiences for both artist and audience. His whirling tree-ring drawings, 300 Years and 283 Years, appear as vortex-like meditations on the passing of time.

In his symposium performance, A Clearing in the Forest, Anderson “invoked the global struggle” in a technology-infused ritual, summoning the ghosts of media-driven consumerism and environmental corruption through DJ-ing, recitation and ringing of bells. Similar to James Nares’ Desirium Probe (which Atlanta artist Andy Ditzler recreated in 2012), the piece treated media and advertising as spirits to be channeled and released. Masud Olufani’s Tight Packers: Excerpts and The Ballad of Raymond Sanders are among the most potent works, not necessarily congruent with the rest of the show, and not really needing to be. Through concise visual language, Tight Packers weaves together the notion of overcrowded American prisons with the historical memory of overcrowded slave ships (literally called “tight packing”). The piece draws a sobering parallel between slavery of the 1800s and the ever-increasing number of incarcerated black men in America, the presumed result of endemic racial profiling and increased corporatization of the American penal system.

The Ballad of Raymond Sanders collapses time similarly, presenting an antique typewriter and a typed composite narrative of the various influential black men in the artist’s life. Here, the actual telling of the narrative is the point, a proactive visual correlation to Black Lives Matter.

The symposium turned out to be a symbiotic force animating the artists’ works. I hope that it will be repeated in future exhibitions, and that programs like it will continue throughout an exhibition’s run, allowing for more thorough integration between the works and the live engagement around them.