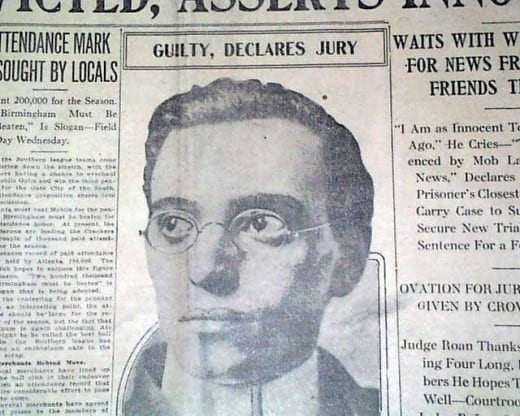 Leo Frank was a mild-mannered, industrious, Cornell-educated engineer from New York who kept a detailed log of his chess strategies and he courted his wife with stilted, sweetly formal love letters. A century ago, on August 17, a mob abducted him from a state-run prison in Milledgeville and hauled him to Marietta, where they hanged him from an oak tree in one of the nation’s most publicized lynchings.

The atrocity was the result of another tragedy two years earlier, when a 13-year-old girl named Mary Phagan was murdered and presumably raped while under Frank’s employ at Atlanta’s National Pencil Factory. A protracted and confusing legal investigation ensued, inflamed by yellow journalism and anti-Semitic rhetoric, and Frank was found guilty. His sentence was commuted to life in prison, but that did not satisfy the bloodlust of the mob organized by a Superior Court judge, the son of a U.S. senator and a former governor.

The Georgia State Board of Pardons and Paroles pardoned Frank in 1986. On the occasion of the centenary of Frank’s death, the Georgia Historical Society will present “The Ghosts of Leo Frank: Reckoning with Georgia’s Most Infamous Murders 100 Years Later” at the Earl Smith Strand Theatre, near the scene of the crime. Journalist Steve Oney, author of And the Dead Shall Rise: The Murder of Mary Phagan and the Lynching of Leo Frank (2003), will share the stage with Stan Deaton, a senior historian with the society, beginning at 8 p.m.

ArtsATL talked with Oney, who spent 17 years researching and writing his 742-page opus, about the notorious case.

ArtsATL: Why does this case have such an enduring impact? Why are we still talking about it, a century later?
Steve Oney: A lot of people still don’t know about this case, but it was a pileup of so many factors on ethnic and regional fault lines. It had elements of sex, race, class and anti-Semitism, and it was ground zero for the polarization between the North and the South, which we see rearing its head again today. The whole case illuminated the social tensions in the South like a huge lightning bolt that threw everything into stark relief.

This case sent the signal to Northerners that “we’re in charge.” So I want to summon, to invoke the ghost of Leo Frank with full awareness that it was exactly on that square in Marietta where he was murdered, with the hope that in reckoning with these deeds, we will shed more light than heat. I also believe this case foreshadows the conflicts we see today between the mainstream media and the unhinged rhetoric of the blogosphere.

ArtsATL: Have you heard from any descendants of the people in the mob, asking you not to dredge up these painful events?
Oney: Well, the default position in the South is “don’t dredge anything up,” but no one, so far, has challenged me or taken issue with what I wrote. Not long before my book came out, a librarian had posted the names of everyone who was in the lynching party, but there was no context to it, no information about how everyone was related to this case. I became friends with a couple of daughters of one of the men, and they helped me sort out the personalities and personal histories and connections in the mob.

ArtsATL: Tell us about the aftermath of the lynching.
Oney: A grand jury investigated the lynching but did not return an indictment. However, that panel was led by the leader of the lynch party! There were no federal civil rights laws at that time or F.B.I., so the case died when Frank died.

The New York Times, which had championed his innocence, backed off because they felt they had inadvertently exacerbated the situation, and the Atlanta papers backed off for more personal reasons. Someone named Robert E. Lee Howell danced a jig on Frank’s head when he was cut down from the tree — Howell was the cousin of Clark Howell, the editor and publisher of the [Atlanta] Constitution.

Atlanta was a much smaller town then, where so many people were related to each other. Other people in power were related to the members of the mob. It was such a volatile case that people stopped talking about it. It became the elephant in the room.

ArtsATL: How did it affect Atlanta’s Jewish community?
Oney: Some of them left the city, but I think the exodus has been overstated a bit in terms of numbers. Most stayed, but they became much quieter. For example, one rabbi stopped having the chuppah at weddings. They didn’t want to draw attention to their Jewishness.

It was a blunt-force trauma to the Jewish community, but most of them stayed on, living in fear and confusion. This case also helped give rise to the Anti-Defamation League, and it also helped in the revitalization of the Ku Klux Klan just a few months later.

ArtsATL: Tom Watson’s anti-Semitic rhetoric in his publication helped fuel this lynching. Were you glad to see his statue moved from the Capitol?
Oney: I have a minority opinion on that, now that Southern iconography is in the news. I don’t want to see someone waving a Confederate flag in my face, but the statues provoke thought. Howell Raines was inspired to write because he had to look out at that statue of Watson, wondering how he could’ve gone so wrong, so I think the statue issue is a little different from the flag issue. We need to study our history, and statues can be a way into that.

ArtsATL: What prompted your initial interest in this case?
Oney: In 1985, a man named Alonzo Mann, who was 85 and on his deathbed, said that he was working on the day Mary Phagan was killed and saw James Conley, a sweeper at the pencil factory, carrying her body. He had been a shy 14-year-old at the time, and his parents told him to stay out of it.

So I wrote a piece for Esquire about this deathbed revelation. I visited Mann at the V.A. hospital in Tennessee. At the time, a group of lawyers was petitioning to get Frank pardoned, and they eventually succeeded at that. I’m 98 percent sure that Conley did it. It still remains a mystery, though, and ultimately we will never know exactly what really happened.