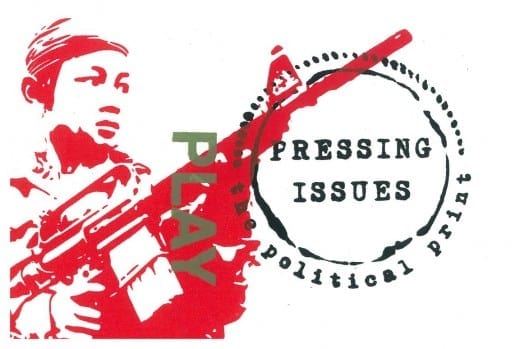 Ever since Johannes Gutenberg invented the printing press in the 15th century, the power of printmaking to spread political ideas has been a constant. Now that Change.org petitions and Upworthy videos have largely replaced posters and pamphlets, however, printmakers have to wonder whether the medium has lost its influence.

Atlanta artist Stephanie Kolpy organized Pressing Issues: The Political Print, an invitational exhibition of works by 30 local artists, to answer this very question. It consists of screen prints, drawings, paintings and multimedia works that take aim at everything from wage inequality between men and women to ethics practices in slaughtering animals for food. (It is on view at the J Gallery inside of Binders art supply store at Ponce City Market through August 28.) “I wanted to do something that bridges major printmakers in Georgia and art education in Atlanta,” Kolpy said. “I have been primarily teaching printmaking at Georgia State University since 2007, and I think the medium can seem archaic, unless it is contemporized. The thing that keeps it relevant is the ability to make multiples.”

Kolpy came up with the idea for the exhibition out of the desire to encourage her students to create work about subjects that matter to them.

“I asked my students, how can you make art that is smart and communicates with a contemporary audience? This is why all of the issues addressed in pieces in the show are relevant to now. ”

She created a contest for her graphic design and printmaking students to design the catalog cover and show cards, which are on display as a part of the exhibition. The exhibit catalog’s introductory essay by ArtsATL critic Faith McClure comments on creating socially and politically relevant arts education. “Printmaking doesn’t reach a giant audience anymore, but it can still have a voice,” Kolpy said. “It can also make a huge comeback, just like drawing did a few years ago — look at the Sprawl exhibition at the High Museum of Art.”

What is most striking about the pieces in the exhibit is that, much like political cartoons, they are simple and witty in their execution, and the artist’s stance is clear. They are also the types of images and messages that could easily be translated onto a T-shirt that would be sold at Urban Outfitters. Sergio Suarez combines monotype with other techniques in Distorted Faces, an image in which the portraits chiseled on Mount Rushmore are hidden by piles of televisions and satellite dishes.

Xiao Huo’s One Child Policy depicts a stork flying with a baby in its beak and the coordinates of a gun scope aimed at the bird.

Others address such topics as child soldiers in Sierra Leone, conflicts in Burma, gay marriage, house foreclosures and animal rights.

“I feel art at its best is a visual voice in the community,” Kolpy said. “Art and artists have the potential to question current ideologies, create social change, cross-cultural and ideological boundaries and the medium of printmaking has a rich history of being successful at reaching a broader audience.”

Kolpy hopes to do a larger version of the show for The Southern Graphics Council International (SGCI) conference in Atlanta in 2017.