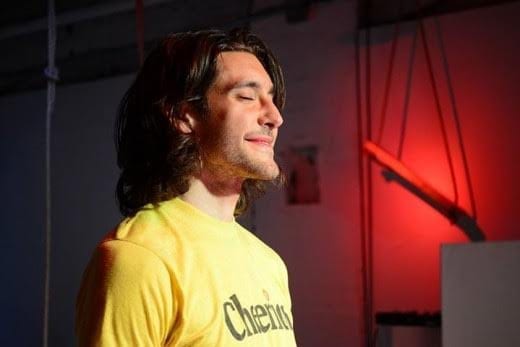 Erik Thurmond will dance to, and sing, seven songs that he composed.

“Song and dance” are so linked together that it’s somewhat surprising to consider that the act of singing has remained almost entirely absent from the world of contemporary dance. Great dancers may thrill us with their high leaps and graceful moves, but they seldom sing a note.

Placing the two forms together has become something of a recent interest for two of Atlanta’s most prominent young independent artists: dancer Erik Thurmond and playwright Johnny Drago, who are also a couple.

Their latest show Monument, running at Dashboard’s Cube Space August 13-15, is a new take on the story of Salome and the dance of the seven veils. It’s a one-man performance in which Thurmond, well-accustomed to life as a professional dancer as a member of CORE Performance Company, will both dance and sing.

ArtsATL caught up with Thurmond and Drago to ask about the new show.

ArtsATL: So the subject of the show is Salome. How did that come about?

Erik Thurmond: I feel like I have these ideas that float around for a long time, and occasionally they lock into place and they become a project that I work on. Oscar Wilde’s Salome was something that I read in high school, and it was always something of interest. I was in Amsterdam recently, and I saw the opera Lulu. It had me thinking about Salome again, this femme fatale, a dangerous woman character. I was thinking about what women I would like to work with to create this character. Also in Amsterdam, I was making music with some friends. Making music is very different from making dances, and it all just flows out of me in a very different way. The two ideas finally clicked: What if I put me making music and Salome together rather than trying to find a woman? What if I become Salome?

ArtsATL: So you’ll be singing in the show? Thurmond: It’s seven original songs that I’ve written and composed on my computer. It’s really more of a singing show than a dance show … I locked myself up for 10 days this winter with a little electronic organ from the ’70s and wrote 10 songs. It was the first time I’d ever done anything like that. These ideas, these melodies and these words just happened. I love music and it’s a big part of what we do as dancers. It’s just not something that I’d practiced making.

[Atlanta composer] Ben Coleman later gave me a computer program that’s a really amazing tool. I played with it a lot when I was traveling. All these ideas clicked, and I got really anxious and excited to perform it. That seemed like the next step in taking it seriously, just using that dimension, using my voice as well as my body to talk to people. The Cube Space that Dashboard has been so generous with is no longer going to be theirs after September, so we figured: Let’s set a date.

ArtsATL: Johnny, as a writer, did you have a hand in creating the lyrics?

Johnny Drago: No, I haven’t really had a hand in writing the songs. But I’ve had a hand in editing them, kind of reshaping them and things like that. I’ve tried to stay pretty hands off in terms of writing the material. It’s not my writing project. I’ve been helping to shape things and trim things away.

ArtsATL: Your role is as a director then?

Drago: Yes. That’s the idea. I’m helping to stage it, which has been interesting because there’s this duality between his idea of “I want to get up and perform songs,” and then his idea of taking on Salome. We’re trying to figure out the line between Erik as himself and Erik as this character. We’re trying to figure out playing a character while also remaining nakedly true to the performer. It’s been interesting to see the differences between actors, who perform with language, character and emotion, and dancers who work more with mood, texture and movement. That’s what’s been most interesting to me, trying to look at it from both angles with this project. It’s such a character-based, language-based performance.

Thurmond: It’s just me. It’s just a completely different world. I’ve studied music theater, but I turned off that part of me for so long to be a dancer. Like Johnny was saying, the approach to dance performance is so different. The material is so different. It’s been such a different body experience than what I go through in dance. It’s been challenging, but exciting to be expressing myself in different ways.

ArtsATL: It must be challenging for you to live together as a couple and then also create a work together as independent artists?

Drago: We talk about art endlessly day and night. We’re constantly in the middle of some ongoing conversation about something one of us is making. There are times when we literally sit down and say we’re not going to talk about art and then 30 seconds later it’s like, “I want to say one more thing.” That is the process. We are just constantly thinking and talking about these things. Whether it’s something I’m doing, something he’s doing, something we’re doing together, it’s always the subject.