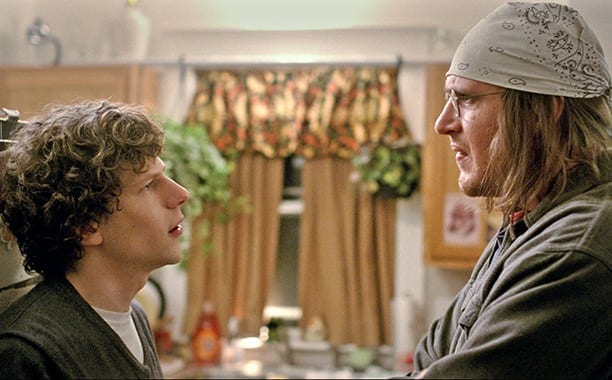 Preview: For director (and Athens native) James Ponsoldt, “The End of the Tour” was a labor of love It only took five days out of his life, but it was a period that forever shaped writer David Lipsky’s career. The near week he spent interviewing author David Foster Wallace for Rolling Stone magazine is the basis of the new film The End of the Tour, directed by Athens native James Ponsoldt and opening Friday.

Starring Jesse Eisenberg as Lipsky and Jason Segel as Wallace, Tour captures the time just after the publication of Wallace’s book Infinite Jest in 1996. After a pitch to his editor, Lipsky is able to go on assignment with Wallace, whose life has suddenly gotten more public.

The two talk a lot and tread around each other, always aware a tape recorder is on. While the interview was never used, Lipsky wrote a book about the experience called Although Of Course You End Up Becoming Yourself: A Road Trip with David Foster Wallace. Ponsoldt’s former Yale professor, playwright Donald Margulies, prompted a collaboration. The two had stayed in touch after Ponsoldt graduated and often saw each other’s work. Margulies emailed Ponsoldt, asking his former student if he was a Wallace fan or had read Lipsky’s book. “He did not know that I was a huge fan and I had read Infinite Jest the minute it came out,” Ponsoldt recalls. “He told me he had a script he’d like me to read; I was thrilled, humbled and really really nervous.”

What Lipsky got from the five days is documented, but what Wallace — one of America’s most influential authors who committed suicide in 2008 — took away isn’t. “During the time Lipsky was with Wallace, Wallace had conflicted feelings,” says Ponsoldt. “He understood the pressure Lipsky was under acutely, but he had a complicated relationship with fame.”

Ponsoldt feels Lipsky saw writing his book as a way to present the Wallace he knew — a man of empathy, wit and intelligence. Yet, who David Lipsky was at the age of 30 is much different than who he was 12 years later when he wrote his book. The interview deeply impacted him and changed the course of what he focused on and valued.

As part of his research, the director listened to the five days of recordings. “It reminds you of the best late night conversations you’ve ever had with friends, talking about movies and politics and everything imaginable,” he says. “It’s that, but smarter and funnier. It sounds like two people becoming friends, tinged with the complication of this being an interview with a major magazine and a tape recorder being there.”

The notion of the two Davids becoming friends is a huge theme of the movie. For Ponsoldt — best known for 2013’s The Spectacular Now — it’s rarely seen on film. “I don’t think male friendship or platonic love between two people is explored that much,” says the director. “We are interested in cookie-cutter romance but there is something about friendship stories that are wrought with complications.”

What impressed Ponsoldt most about Wallace was his ability to articulate his thoughts in ways others were not able to. “He was remarkably sensitive to understanding the experience of being alive, in conditions and situations that were relatable,” he says. “He gives voice to everyday life and experiences we’ve all had. When I first started falling in love with his writing, he felt like someone I’d love to spend hours with, talk to about everything under the sun.”

While both actors are natural fits for the characters, the revelation is Segel’s deeply-felt performance. Ponsoldt has long been enamored with the How I Met Your Mother actor. “Freaks and Geeks, I think, was one of the most beautifully cast ensembles ever,” he says. “Of all the great actors that came from this show, for me, Jason Segel was the emotional anchor. With Forgetting Sarah Marshall, I found him so likable. He reminded me of the young Tom Hanks. But he also wrote that, as well as (2011’s) The Muppets.”

Eisenberg, too, is a writer and playwright — and both knew the types of men they were portraying. “These guys understand the life of a writer, spending a lot of time by yourself trying to get what is in your head on the page and realizing you are going to fail most of the time,” Ponsoldt says. “They’ve stuck with it; they get what it is like to love language.”