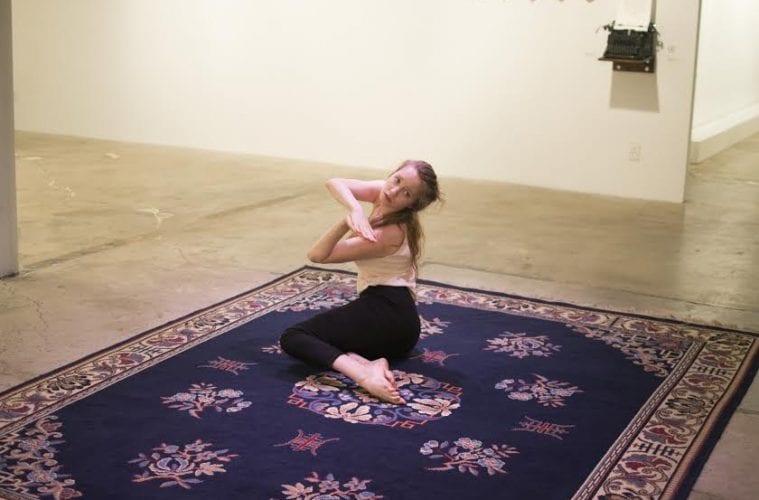 Dance was a major element of a strong Walthall Fellows show at the Museum of Contemporary Art of Georgia this year. The Walthall Fellowship is an annual year-long program created by local arts organization WonderRoot that provides 12 Atlanta-based artists with resources, workshops, mentorship and a retreat; the program culminates each year with an exhibition.

Most of the fellows are visual artists, but in recent years, performing artists have been added to the mix, and this is the first year that the small group included two dancers, Sean Hilton and MaryGrace Phillips, and a performance artist, Stephanie Pharr, all of whom unveiled new work on the exhibition’s opening night July 16 and on other dates early in the exhibition’s run. The performances are over, but the visual art will remain on view through September 12.

Sean Hilton’s “Dave 2” had the dancer creating improvised movement to various stories provided by volunteer speakers who took turns at a microphone. Participants were encouraged to share a story, and most chose to narrate a personal experience or anecdote.

Hilton used the unusual, challenging space of MOCA GA incredibly well, utilizing an interior courtyard as a performance area, with walkways above acting as balconies; visitors lined the railings and peered down at the performance below, creating an evocative pit-like arena.

At first glance, Hilton’s movement seemed too directly interpretative; one even wondered if he was somehow providing an illustration or acting out events in the story even if his movements weren’t an exact match. But what became clear over time spent with the piece was that Hilton wasn’t responding as much to the content of the story as to the sound of the voice, and the pace and tone of the storyteller. The effect — a living body responding to the sounds of an amplified voice — could be ghostly. Hilton has a pretty intense interior focus and concentration.

Still, it wasn’t always easy for the viewer to put aside the immediate notion that the movement was interpreting content — a take on the work that could make it seem superficial and silly — but once done, the piece really opened up. It’s a work that suggested not the accessibility of the past or its potential to be shared through narrative, but the ultimate irretrievability of experience, its unbridgeable distance from the present moment and the living body. Storyteller and mover shared the same literal space, but they were in different worlds.

Nearby, performance artist Stephanie Pharr’s work “Bound and Labelled” had a rotating group of participants of varying ages, races and genders all dressed in black lined up in a long, narrow interior window at MOCA. It was an interesting evocation of a police line-up, very resonant at this particular historical moment, but the interactive element of the piece — visitors were invited in the program notes to interact with the artists by saying “Hello” — didn’t seem to fit its more direct evocations of incarceration and institutional violence.

On opening night, in the busy and jumbled space at MOCA, the interactive, many-peopled piece often butted up against Hilton’s more meditative, less populated work. The two works were radically different in tone and execution, and whichever way the viewer turned, there was always the uncomfortable feeling of turning one’s back on a performance within sight of the artists.

On a simple, patterned floor rug in the exhibition’s main room, MaryGrace Phillips performed her work “Engel!” Like Hilton, she has an intense interiority, a laser-like, focused inward concentration that’s lovely to see coupled with the graceful, sinuous shapes of her physical movement.

To the meditative sounds of experimental composer Bora Yoon, Phillips created mandala-like patterns in space, movements that were especially delicious to watch because it was clear the gestural patterns had deep internal iterations as well. Cumulatively, there was something funereal about the gallery room itself: in Lucha Rodriguez’s lacy white patterns of hand cut paper, in Romy Maloon’s dogs with bloody paws and nuzzles made entirely of white and red flowers, in Masud Olufani’s somber portraits of the incarcerated, in Steven Anderson’s tree rings and in the hub caps of Casey Lynch with filigree as elegant as the gates of a cemetery.

There was a note of sad finality and expiration, and for me it was a note echoed and amplified throughout Phillips’ performance, especially at the end when she dropped to the floor, showing the previously pattern-making and expertly controlled limbs in total deathlike inertness.

It’s a moment I’d be unlikely to admire from another performer, but I think it says a great deal about Phillips’ abilities to say that I liked it. She’s a lovely dancer and one to watch as she continues to create independent work in Atlanta.

The annual Walthall show has moved to different locations from year to year. Though it still hasn’t found its sweet spot yet, MOCA GA, in spite of a few problems, does seem to be the fellows’ best setting so far, and the show on the whole was certainly among the program’s strongest.

It’s exciting then to know that WonderRoot is planning to move into new space soon, a 54,000-square-foot expansion into the former John F. Faith Elementary School on Memorial Drive, a new space which will include studios and a performance venue. Along with the strong 2015 Walthall Fellows’ exhibition, it shows a rare but welcome commitment to performing artists and an understanding that dance and performance are crucial aspects of contemporary art.