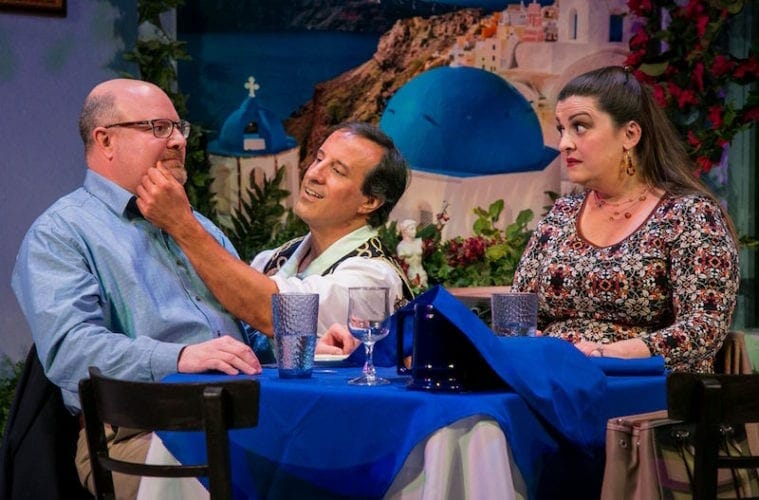 The "Slow Food" company at Theatrical Outfit consists of Matt Lewis (as the put-upon husband), Dan Triandiflou (as the annoying waiter) and Marcie Millard (as the deadpan wife). The comedy runs through February 16. (Photos by Casey Gardner)

Review: Plenty of laughs, not much plot in comedic “Slow Food” at Theatrical Outfit

Imagine being in a restaurant with an overbearing waiter. His well-intentioned actions, condescending at times, and lack of real service make the experience less enjoyable as you try to keep your frustrations in check. Not hard to imagine, is it?

Written by Wendy MacLeod (The House of Yes, Sin), the comedy Slow Food explores much more than just bad service. Beneath the antics lies a story about recent empty nesters trying to find their place in this new reality.

Theatrical Outfit’s production (through February 16) is directed by Ryan Oliveti and features Marcie Millard and Matt Lewis as a couple on an anniversary trip. Their maddening evening, where nothing goes right, turns disastrous when Dan Triandiflou’s waiter exacerbates an already tenuous situation.

The comedy, uneven at times and a bit too long (even though it’s 90 minutes with no intermission), could suffer with the wrong cast. Under Oliveti’s direction, these actors overcome the plot’s flaws and create a laugh-filled experience. 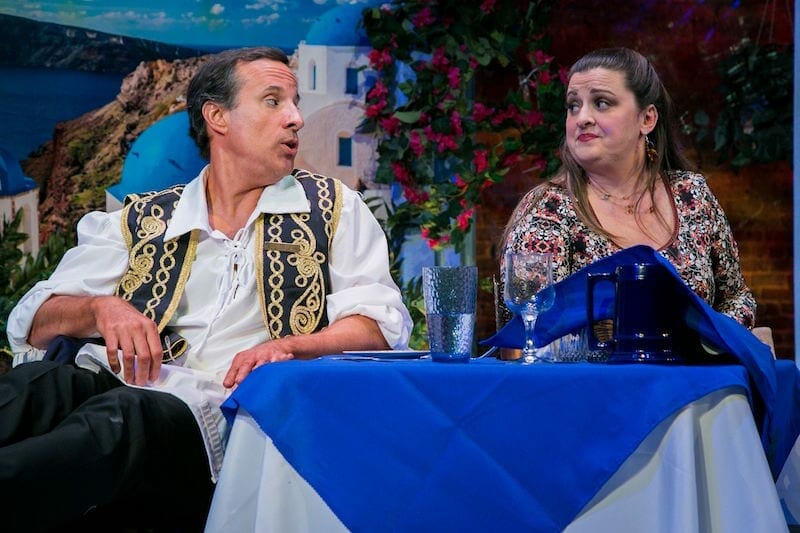 Dan Triandiflou as the waiter and Marcie Millard as the ever-hungrier wife.

It does take a bit of time to suspend disbelief here. Why this couple puts up with the waiter and doesn’t leave, even though it’s the only open place in town, is hard to swallow. Yet, once you’re able to let go of that disbelief, the goings-on become engaging and fun.

As the obnoxious waiter, Triandiflou gives it his all, pushing the limit without going over the top. Whether he’s eavesdropping nearby or breaking down at the memory of his beloved cat, he creates a character memorable enough to carry the play.

He shines most in his interactions with Lewis. Each actor plays off the other well, despite a rocky start (which is more from the stilted dialogue than the actors). A scene in which the husband flirts with the waiter to try to get their food quicker earns the evening’s biggest laughs.

Millard, a recent Suzi Bass Award winner for her work in Horizon Theatre’s The Cake,  plays the wife with an even keel, balancing her husband’s hotheadedness and the waiter’s eccentricities. She keeps the situation from escalating with the right tone and a keen awareness of when to exert emotion and when to dial it back. She also shines comedically with her deadpan delivery and subtle reactions. 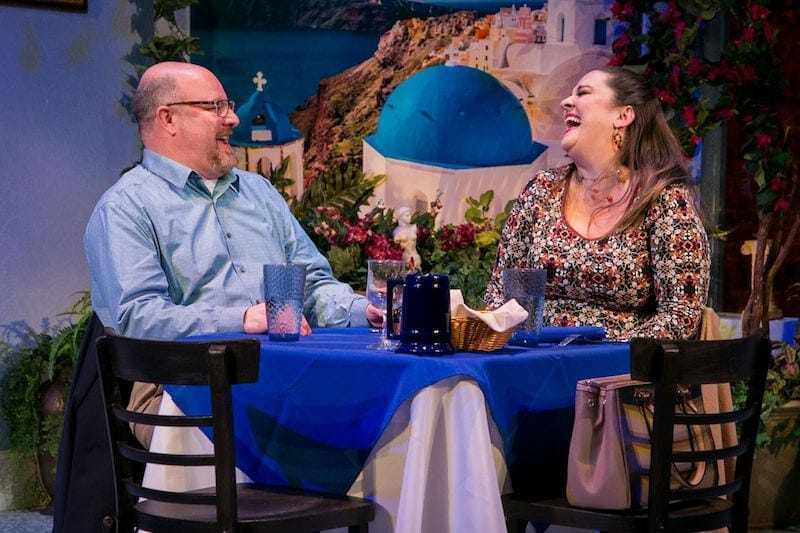 She and Lewis create a relatable couple. They move effortlessly through anger, sadness and resignation. When they discuss their marriage, especially feelings of no longer being desirable, the realness onstage makes you feel like you’re eavesdropping. These tender moments give the show the heart it needs to balance its absurdity. It could use more of them.

The set by Isabel and Moriah Curley-Clay includes onstage seating, a nifty restaurant that allows Millard to interact with audience members at other restaurant tables.

Any problems with the production arise from MacLeod’s script. The play moves from anecdote to anecdote without much substance. There are real issues bubbling in this couple that could be explored, making the play even more endearing. Instead, she presents them as asides between episodes with the waiter. That setup doesn’t provide any room to dive into the deeper emotional issues, which would allow the show to earn its laughs as a true comedy instead of a long sketch.

The script itself may be half-baked, feeling at times like a long sketch, but the Outfit staging hilariously showcases some of Atlanta’s best comedic talent.