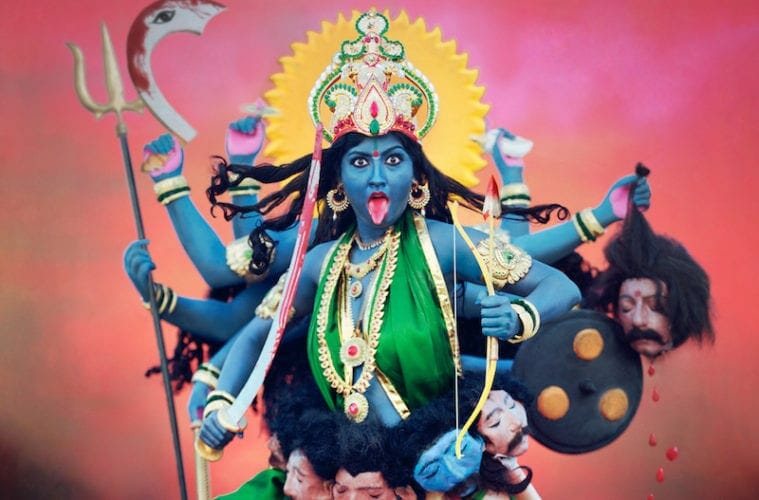 Detail: Artist Manjari Sharma's 2013 chromogenic print "Maa Kali." The fearsome goddess and the destroyer of evil has blue skin, a long tongue, and a necklace and belt of skulls and body parts. (Courtesy of the artist)

As far as world religions are concerned, art is a renewable resource. Even as ancient and traditional objects and images remain touchstones of faith, artists have continually created new forms of spiritual expression and instruction to meet their needs and those of their generations.

Transcendent Deities of India: The Everyday Occurrence of the Divine, a fascinating exhibition at Emory University’s Michael C. Carlos Museum through May 17, proves the point.

Like their forebears, the three artists featured here depict Hindu gods and goddesses and the ancient narratives about them. Implicitly or explicitly, they subscribe to the Hindu practice of Darshan, in which “the beholding of a holy person, sacred object, natural phenomenon or deity especially in imaged form” is “an active form of worship and process of spiritual fulfillment.”

Yet, each has drawn on contemporary art modes to forge a personal visual language with which to express, explore and share their faith. 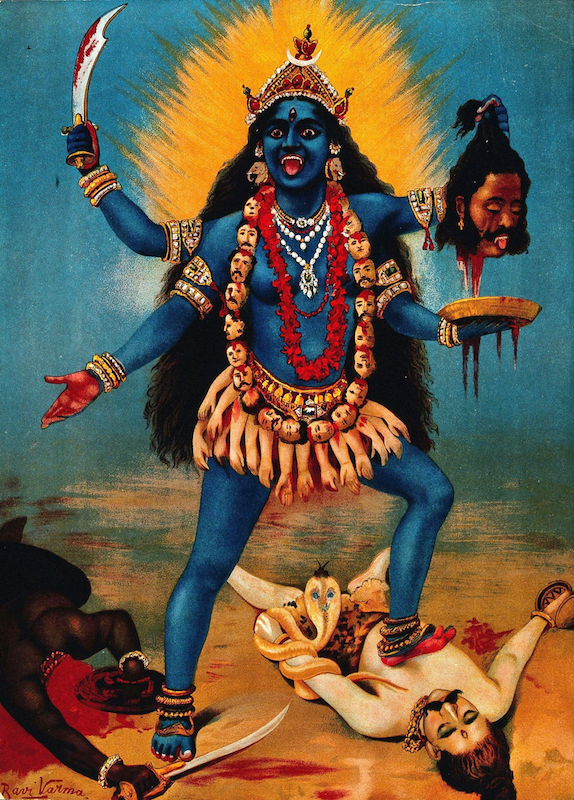 A traditional image of the goddess Kali. Compare it to Manjari Sharma’s (above) and Abhishek Singh’s (below).

The 19th–century artist Raja Ravi Varma (1848–1906), said to be the first Indian artist to apply European aesthetics to religious painting, is considered the father of modern Indian art. In contrast to the flattened figures and settings of traditional Indian painting, he introduced perspective, light and shadow, and volume. Occasional references to European art history peek through as well: A goddess on a swing looks uncannily like a Jean-Honoré Fragonard painting, another suggests Botticelli’s Venus.

Varma was also famous for expanding the availability of his images. He founded India’s first printing press in 1894, which enabled him to sell inexpensive versions of his paintings. Images once only found in temples and palaces now could be acquired by ordinary people for worship in their homes.

It became customary for families to embellish their prints, adding fabric to create clothing, and decorating them with jewels and sequins as a form of veneration. In fact, it takes a careful look to realize that what appear to be unique images are actually altered versions of the same print. Varma, it seems, affected religious as well as artistic practice.

A century later, Manjari Sharma (born 1979) has created devotional images that bespeak and speak to her time. Sharma grew up in Mumbai immersed in traditional religious practices and the ubiquity of Hindu imagery. She moved to the United States to study photography. Like so many immigrants, she uses the vocabulary and techniques of contemporary art to explore aspects of her home culture, but never so explicitly as in Darshan, the series of nine photographs that command the back gallery. Five feet tall, shot in eye-popping color and encased in a thick elaborately carved gold frame suggestive of a temple setting, each is a portrait of a deity in the Hindu pantheon. 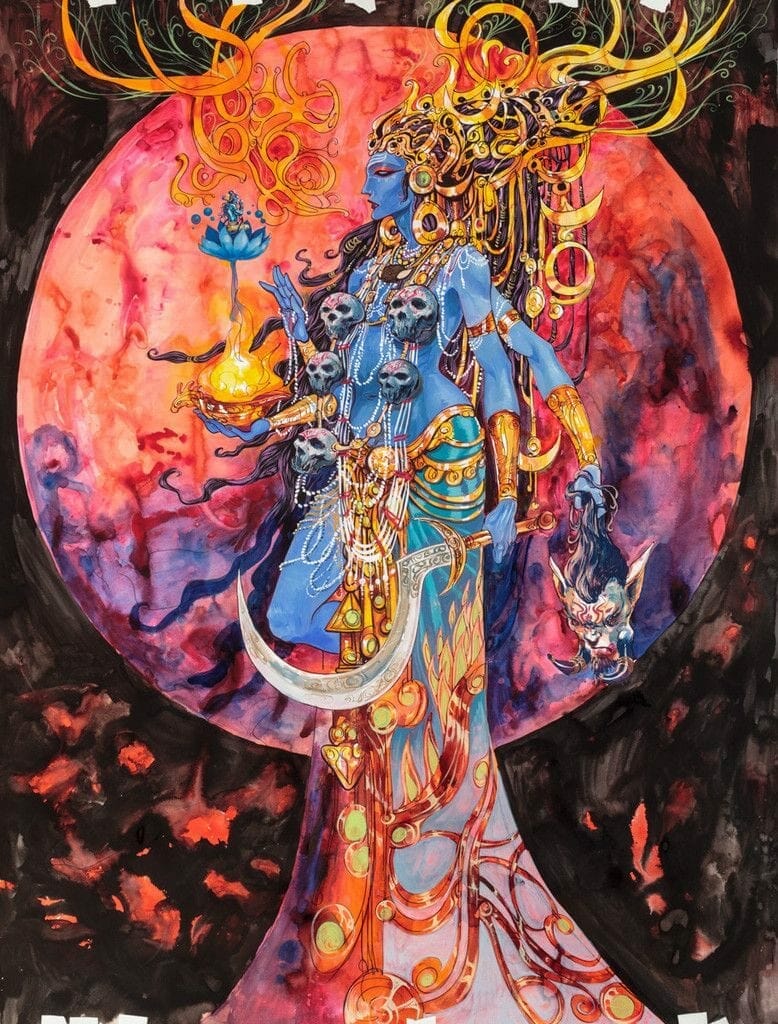 Sharma placed a premium on authenticity. She replicated the settings, costumes, poses and attributes found in traditional representations. Anyone familiar with the pantheon would recognize the fearsome goddess Kali, the destroyer of evil, by her blue skin, long tongue, and necklace of skulls and body parts. In addition, she chose actors whom she felt had symbolic or physical connections to each deity. For instance, a bearded architect portrays Brahma, the creator of the universe.

One might assume that the multi-limbed and jewel-laden figures are the product of Photoshop, but a wonderful behind-the-scenes video documents the army of artisans who create the jewelry, costumes and sets, and prosthetic limbs.

Sharma writes that although her life became more secular in the United States, she came to consider her picture-taking an embodiment of the sacred power of seeing in Darshan. Whether viewers have a spiritual experience when contemplating these images, the intensity comes through.

Abhishek Singh, 37, is on a personal spiritual journey as well, but he employs the languages and mediums of popular culture, among them graphic novels, cartoons, comic books, fantasy, science fiction and even virtual reality. 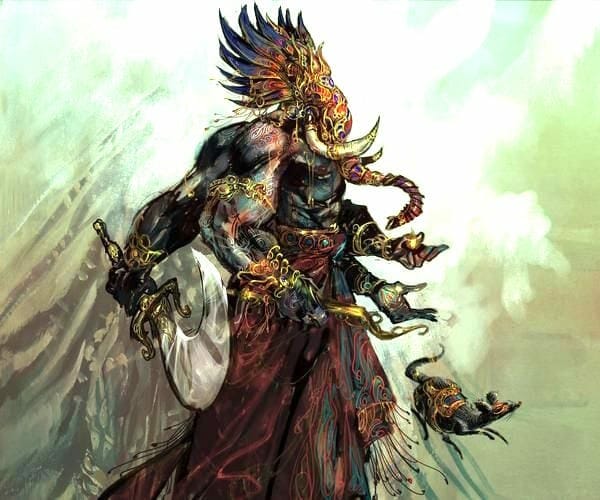 As the sketches, finished drawings and paintings here demonstrate, Singh is a superb draftsman. His line is fluid and effortless (which you’d know if you saw his magical demonstrations when he was in Atlanta). His compositions are sinuous and mind-blowingly detailed. Painted studies for illustrations in the show reveal his facility in watercolor and oil.

His gods and goddesses could be mistaken for American superheroes. The men look like body-builders. The women are voluptuous. This isn’t as much of a leap as it might seem. The obvious sexuality is in the original stories and ancient art, and he isn’t the first to portray deities and traditional tales in comic books. Copies of some of Singh’s books are provided in the gallery, but it would have been interesting to see some of his comic books and cartoons.

This raises a question. Why are Varma’s prints accorded so much more space than the other artists, especially when they are so repetitive, and Singh’s work is rather squished into a small gallery? Ultimately, though, the organizers at Asia Society Texas Center created an absorbing exhibition with lots of ideas to unpack and visual experiences that will be new to many.