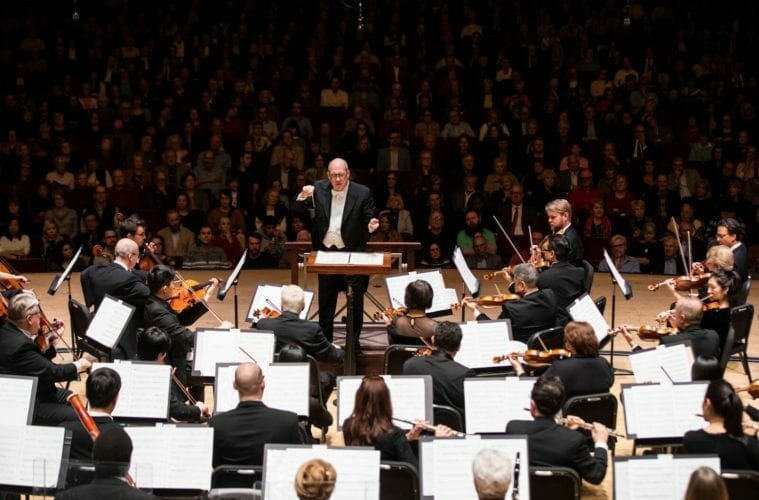 Music Director Robert Spano seemed energized by the performance of a new work, and by the presence of guest pianist Emanuel Ax. (Photos by Raftermen)

The Atlanta Symphony Orchestra’s concert last night brought together forward-looking, optimistic works, two of them American: the world premiere of the symphonic poem Onward, by the winner of the Atlanta-based Rapido! Competition for music composition, Brian Nabors; Appalachian Spring (1944), the well-known orchestral suite by Aaron Copland that was commissioned as incidental music for a ballet by Martha Graham; and Brahms’ First Piano Concerto, which moves from darkness to light, from tempest to joy.

The Brahms was performed by Emanuel Ax, an internationally touring pianist who is also known for his chamber collaborations with cellist Yo-Yo Ma. The concert repeats this Saturday, November 23.

The composer of the night’s opening work, Nabors, has an innovative yet accessible musical language that is contemporary classical while absorbing a variety of styles such as jazz, funk, R&B and gospel. A native of Alabama and an African American composer to watch, he is currently on a 2019–20 Fulbright scholarship to the Sydney Conservatorium of Music in Australia, where he is studying with noted composer Carl Vine.

Onward is a 10-minute symphonic poem featuring perpetual motion figures and expressing ideas of human dreams, growth and discovery. The work bursts with orchestral colors, as noted by Music Director Robert Spano in the preconcert video interview. Nabors has a special talent in doubling orchestral sounds selectively to create light and fresh textures.

Harmonically and melodically, Onward proved accessible and consonant, a promising work that deserves more performances by the ASO, and perhaps a commercial recording as part of a larger album. The piece often has incremental, accumulating processes, as in Jennifer Higdon’s music, but with a more tuneful bent. In other words, Nabor’s piece breathes. As is often the case, Spano and the ASO hit their stride with this contemporary work. Spano, visibly excited, augmented his trademark rhythmic precision with a variety of nuances, indicating orchestral entrances generously and clarifying the degree of separation between notes. The night’s second work, Appalachian Spring in its 1944 orchestral version, depicts a spring celebration of 19th-century white settlers in rural Pennsylvania. Copland’s work, which received a Pulitzer Prize for Music in 1945, was inspired by the Shaker hymn tune The Gift To Be Simple.

The ASO’s performance of the Copland was as convincing as the Nabor, marked by a mixture of simplicity, strength and admirable precision of rhythmic attacks. In the slow introduction, which sets a natural, peaceful, fresh atmosphere, Associate Concertmaster Justin Bruns stood out with a beautifully legato, lyrical violin solo. Appalachian Spring is usually divided into seven sections following Copland’s description.

In the starting Allegro section, Spano navigated a jumble of mixed meters and abrupt, repetitive outbursts with admirable precision. The Moderato was tender and innocent, and here, the ASO brass were appropriately restrained. By the fourth section (Fast), Spano suggested the clearest expressive mood I have seen from him this season, with a folksy, dancelike spirit. By the last of the seven movements, the audience heard beautiful legato chorales from the strings, with Spano providing convincing, expressive gestures and letting the ASO take care of timing details. In this work and the Nabor, it was heartening to hear the best balance and expression from Spano this season.

Brahms’ First Piano Concerto, the only work after the intermission, is a grand, symphonic combination of soloist and orchestra as equal partners, looking forward to his first symphony. The monumental first movement, Maestoso, recalls Beethoven’s Ninth Symphony both in key and in mood, while the tranquil Adagio is a romance-like nocturne. A concluding Allegro non troppo is alternatingly fiery and playful.

The sense of ensemble between Emanuel Ax and the orchestra deepened as the work progressed. At the age of 70, Ax’s technical skills have slipped ever so slightly over the past decade, but his sense of musicianship is heightened and his presence onstage utterly inspiring. In the first movement, he asserted a huge tone with powerful chords, a keen lyrical sense, rich voicings with a variety of concurrent melodies brought out and a supple rubato — all of which frequently combined to produce moments of magic.

What is striking about Ax’s performance is how he recharged himself musically throughout the piece. He frequently sprawled over the instrument as if deep in thought. When the orchestra was playing on its own, he would immerse himself in their playing, communing with every instrument he could find. He then would respond in his next entrance by matching — and surpassing — the orchestra’s expression.

In the Adagio, Ax’s wonderful singing lines and consummate absorption in the ensemble seemed to inspire the orchestra to listen more deeply and play more reverently, far more softly and atmospherically than any other point this season. In the final Allegro, Ax upped his level of energy so that he gave it his all. Quicksilver moments alternated with thunderous crashes on low notes. The Bach-like coda with an organ-like pedal tone and motoric sixteenth notes was utterly joyous. And furthermore, during the thunderous standing ovations, he praised Spano and other musicians over himself, bowing with a modest shrug each time. Here, indeed, was a musician with a heightened moral sense and a passion for great music. The takeaway was that in music as in day-to-day life, we should learn from one another, as all people have value.

By the end of the concert, it was clear that conducting contemporary music energizes Spano. Equally evident was the ASO’s deepening of its collaborative spirit, as led by Ax’s example.