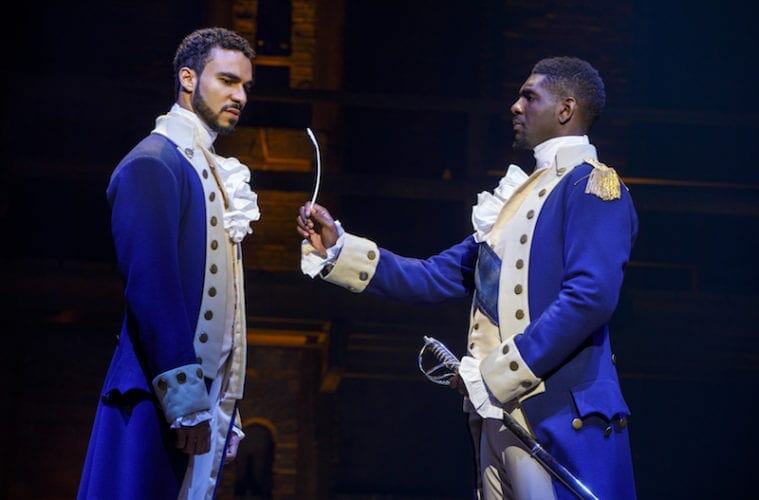 The award-winning musical "Hamilton" returns to the Fox Theatre for a March 31–May 3 run. When it first visited Atlanta in 2018, Austin Scott (left) played Alexander Hamilton, and Carvens Lissaint was George Washington. (Photo by Joan Marcus)

The revolutionary musical Hamilton makes its second Atlanta visit with a five-week run that begins March 31. Single tickets for those performances go on sale at 10 a.m. Monday, December 2.

Tickets will be available online via the Fox Theatre website and at the Fox box office at 660 Peachtree Street NE in Midtown. The award-winning musical about America’s Founding Fathers will run through May 3. Purchases are limited to eight tickets per household for the length of the run. They range in price from $80 to $199, with a select number of $349 premium seats available for all performances. A lottery will be held for $10 seats, with 40 available for each performance. Lottery details will be announced later. Find answers to frequently asked questions HERE.

Hamilton features a Lin-Manuel Miranda score that blends hip-hop, jazz, R&B and Broadway sounds. The original musical, now in its fifth year on Broadway, featured direction by Thomas Kail, choreography by Andy Blankenbuehler and musical supervision/orchestrations by Alex Lacamoire. It’s based on Ron Chernow’s 2004 biography of Hamilton, the firebrand who became the country’s first treasury secretary.

The Broadway version won 11 Tony awards including best musical, the Pulitzer Prize for Drama, a Grammy and a special citation from the Kennedy Center Honors.

Hamilton first played Atlanta’s Fox Theatre in the spring of 2018. In his review, ArtsATL cofounder Pierre Ruhe wrote, “When it first caught Broadway’s attention in 2015, Hamilton was hyped as the musical where the Founding Fathers were portrayed by men of color, dancing and rapping to a hip-hop beat. That turns out to be just one remarkable aspect.”