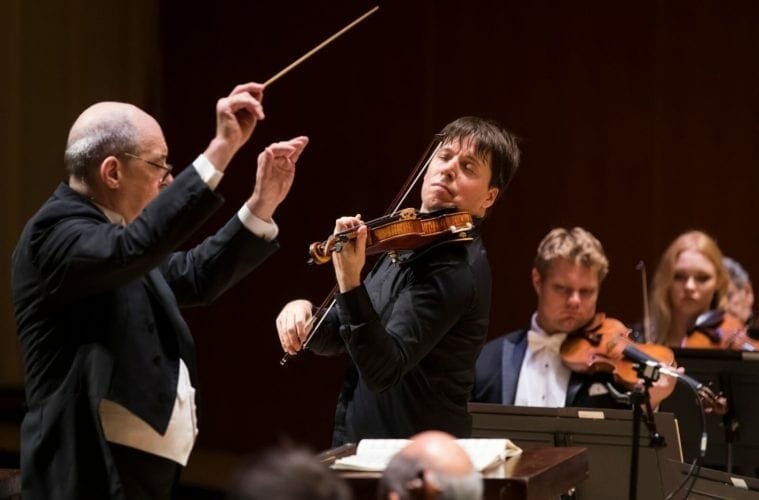 Joshua Bell demonstrated once again that he has earned his sterling reputation as one of the greats of the modern violin. (Photos by Raftermen)

Rather than being organized around an overall philosophical theme, Friday’s first concert of the Atlanta Symphony Orchestra’s 75th season was a crowd-pleasing mixture of a majestic opera overture, an accessible contemporary classical work and two virtuosic warhorses from the violin concerto repertoire.

After a rousing rendition of the “Star-Spangled Banner” (arranged by Walter Damrosch), traditional at the start of each season, the concert proper began with the stately Prelude to Wagner’s mature comic opera Die Meistersinger von Nürnberg (1868), then settled in with Grammy-winning American composer Jennifer Higdon’s Concerto for Orchestra (2002). The second half featured the quicksilver virtuosity of star violinist Joshua Bell in Wieniawski’s Second Violin Concerto (1862) and Sarasate’s gypsy-inspired Zigeunerweisen (1878). The program repeated Saturday evening and Sunday afternoon.

One would imagine that the Meistersinger prelude would be an uplifting, fitting introduction for the upcoming season. The conducting of Music Director Robert Spano, however, quickly lost energy and settled into a default mode as time-keeper, leaving expressive nuances and an overall interpretive vision for the work to ASO personnel. (The ASO is seeking a long-term successor to Spano as music director, as he steps down in 2021.) His restrained, somewhat slow tempo was suggestive of Georg Solti’s iconic interpretation but without the full, deep sonorities Solti brought out. Brass attacks could have been separated and clarified; the passionate, long string lines could have been focused toward emphasized notes and connected; and dynamic contrasts could have been more clear and intentional.

I thought Higdon’s Concerto for Orchestra, a symphonic work in the tradition of Bartók and Witold Lutosławski that features substantial solo passages, would spark greater engagement from Spano, as she is one of the Atlanta School of composers whose works he has so passionately supported. For listeners unfamiliar with her style, it is neoromantic (and tonal) at times but overall more focused on the in-time, gradual development of ideas to create a variety of ebbing and flowing sections. This technique has roots in the minimalist style of composers such as Steve Reich and Philip Glass but is generally sped up in Higdon.

The concerto, which was commissioned by the Philadelphia Orchestra, is in five movements and has an extraordinary number of soloists drawn from all orchestral families.

The ASO put forth a better effort on the Higdon than the Wagner, with Spano — although still too expressively neutral for my taste — providing crisp beats and sometimes suggesting clear moods such as the gentle dance toward the end of the second movement. The concerto’s first movement was appropriately turbulent and cutting, although its intriguing brass chorale could have been better synchronized. The second movement was a jaunty dance with some effective, sensitive passages for strings. The ASO’s take on Wagner’s Prelude sounded languid and under-rehearsed.

The third and fourth movements were perhaps my favorites. The third began like falling water droplets and featured standout solos in the winds. The fourth, which featured the percussion section, began with a supremely still passage with very unusual instruments — especially the bowed vibraphone, which delighted listeners. Spano’s expressively neutral approach was most effective in these still moments. The fifth and final movement was a panoply of busy activity in the entire orchestra, although sometimes with tempos rushed. Overall, though, the audience could have used more visual cues from Spano to note the orchestral families and solo instruments.

In the concert’s second half, Joshua Bell was a jolt of high-test energy, playfully and humorously interacting with Spano, the orchestra and the audience. Bell’s tone was silvery and precise, and he played some of his runs faster than I have heard any violinist before. He is still youthful in appearance and athletic despite his age (51), performing with a violin built in 1713 by Antonio Stradivari.

In the Wieniawski concerto, a veritable showcase of virtuosic techniques such as chromatic glissandi (slides through all the notes available on a piano) and double-stops (two notes played at the same time), the first movement starts off brooding but becomes playful. The lighter, virtuosic moments were humorous, with Bell visually demonstrating the glissandi with highly physical, dance-like theatrics.

The Romance (second movement) is a thoughtful, nocturne-like aria: here Bell played long-breathed phrases with sensitive fadeaways to soft dynamics, but as is characteristic for him, never with romantic, schmaltzy mannerisms associated with early 20th-century violinists such as Fritz Kreisler and Eugène Ysaÿe. To my ears, the ASO and Bell started to “click” in this movement and establish a more relaxed, inspired give-and-take. The gypsy-style finale was fiery, mercurial and speed-obsessed. Audiences love — and for good reason — how Bell can combine bowed and pizzicato notes with almost superhuman speed and coordination.

In the Sarasate, really the ideal virtuoso vehicle for Bell, he combined sensitive expressive shadings, clear articulations between different musical ideas, a full exploration of the softer side of the dynamic range (especially with harmonics on the violin, which sound whistle-like) and improvisational flourishes that gained and lost momentum with utmost surprise. My favorite moments were the really exotic ones when the orchestra was almost so soft it strained one’s hearing, to allow Bell’s spectacular glissandi-using harmonics to be heard. A huge range of emotions was present: the first section was lamenting but also improvisational and ironic; the second was wistful; and the third was fiery and dance-like.

The entire concert, however, raised questions of how the ASO allocates its rehearsal time, with the Wagner clearly under-rehearsed. Bell’s famously energetic solos saved the evening, but Spano needs to move outside his comfort zone and provide both orchestra and audience with an expressive vision. 2021 is still a long way off.