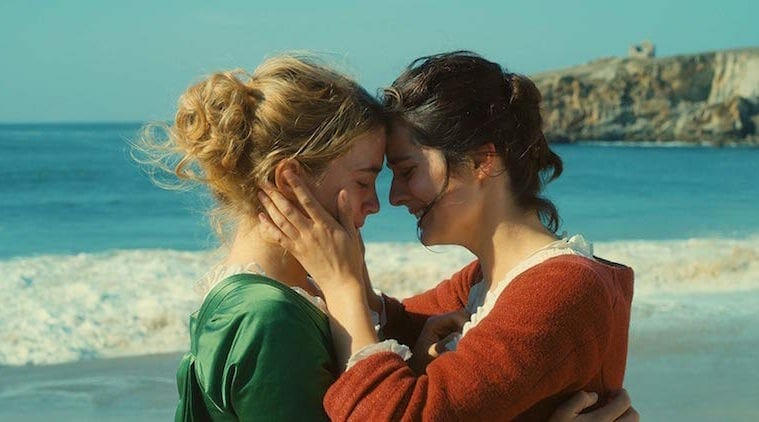 The narrative film "Portrait of a Lady on Fire" gets its Southeastern premiere October 1 at Landmark Midtown Art Cinema.

The event, which began in 1987 and became a stand-alone event in 2008, will run through October 6 at several venues — Landmark Midtown Art Cinema, West Midtown’s Out Front Theatre Company and the Plaza Theatre in Poncey-Highland. The 11-day fest will screen 126 narrative films, documentaries, short films and web series.

The festival puts a premium on quality, focuses on visiting filmmakers and tries to showcase the voices of tomorrow. Its mission is to provide a high-quality event that’s diverse and inclusive. Some films are shown for entertainment, but others — especially the documentaries — are meant to educate and address issues such as discrimination and social justice, HIV/AIDS, religion and marriage equality. “We’re not afraid to take risks,” says festival director Jim Farmer, also an ArtsATL contributing writer. “We’re very bold in our programming.”

Farmer has been Out on Film’s linchpin for 11 years and says, “Each year we get more people who don’t identify as LGBTQ because it’s a really solid film festival. We want people coming there and saying that’s me. That’s my story.”

The following five films, all shot in 2019 and from a variety of perspectives, piqued Farmer’s interest. They’re listed chronologically, in order of their screenings. For a complete schedule and screening times, go HERE.

For They Know Not What They Do

Documentary. Southeastern premiere at 7 p.m. September 26. Landmark Midtown Art Cinema. This 92-minute film from director Daniel Karslake (2007’s For the Bible Tells Me So) charts the story of four religious families with LGBTQ children — including Pulse nightclub survivor Vico Báez Febo and transgender activist Sarah McBride — amid the backlash from the religious right after the Supreme Court legalized gay marriage. “Religion is so important to the South,” Farmer says, “and I think people are going to have strong reactions.”

The director and Febo are expected to attend. “For They Know Not What They Do” opens the 2019 Out on Film festival with its Southeastern premiere at 7 p.m. Thursday at Landmark Midtown Art Cinema. Pictured: Son Ryan Robertson (left) and dad Rob.

A postscreening Skype interview with the Mason family is planned. Portrait of a Lady on Fire

Narrative. Southeastern premiere at 7 p.m. October 1. Landmark Midtown. In French with English subtitles. Won best screenplay and the Queer Palm award at this year’s Cannes Film Festival. The 121-minute film, set in 1770 France, features a painter named Marianne who’s commissioned to do the wedding portrait of Héloïse, a young woman who’s just left the convent. Héloïse is a reluctant bride-to-be, and Marianne must paint her without her knowing. She observes Héloïse day by day, to paint her secretly. Portrait of a Lady on Fire, Farmer predicts, will speak to a lot of people, especially a lesbian audience, which doesn’t often see much programming.

All Male, All Nude: Johnsons

Documentary. 9:15 p.m. October 3. Landmark Midtown. Atlanta native Gerald (pronounced with a hard “g”) McCullouch returns with this 83-minute sequel to his popular All Male, All Nude (2017), which looked at Atlanta’s gay male strip club Swinging Richards, its strippers and its ironic location deep in the Bible South. This follow-up finds Matt Colunga, an original Swinging Richards stripper, opening a new club in Florida and moving from performing to learning how to run a new business and deal with employees, patrons and the local government.

McCullouch and Colunga are expected to attend. Postscreening party at TEN, with Corey TuT performing songs from the soundtrack. “All Male, All Nude: Johnsons” screens October 3. The documentary by Atlanta native Gerald McCullouch follows his popular 2017 “All Male, All Nude,” which looked at the men dancing at Swinging Richards, a local gay male strip club.

Documentary. 4:15 p.m. October 6. Out Front Theatre. The 90-minute film chronicles the journey of Southern-born, black gay researcher and performer E. Patrick Johnson as he travels home to North Carolina to deal with his past. The film also chronicles travels to Georgia, New Orleans and Washington, D.C., as he reconnects with six of the men he interviewed for his book Sweet Tea: Black Gay Men of the South — An Oral History (2008), an award-winning project that he turned into several staged plays over the course of a decade. Filmmaker E. Patrick Johnson wrote the nonfiction book “Sweet Tea: Black Gay Men of the South — An Oral History” in 2008, which spawned stage plays and this documentary. See it October 6 at Out Front Theatre Company.

Making Sweet Tea combines documentary moments from Johnson’s life and the men’s lives 11 years after the book was published. The film also covers the complexities of Johnson’s relationships with the men, his own family and his hometown in western North Carolina. Johnson stages some of the men’s narratives in their homes, in their churches or on their jobs, providing an experimental element to the film and blurring the line between life and art.

The director and three of the men documented in the film are expected to attend the screening.