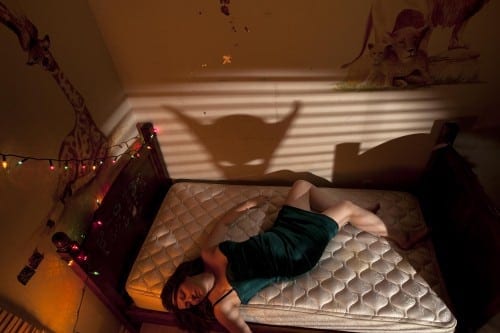 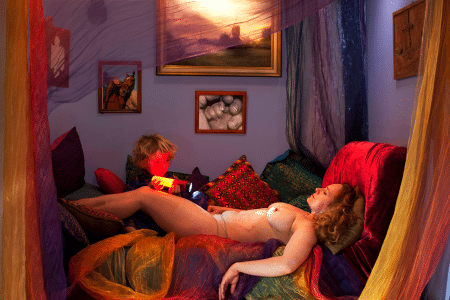 In a time when an exalted concept of motherhood is exploited as a political wedge, Benita Carr’s exploration of the maternal experience in “Morning Sun,” at Whitespace gallery through February 18, walks a razor’s edge between internal and external, mythic and quotidian, love and abjection.

Carr’s photographs and videos confront desire and sexuality as undercurrents in mother-child relations. There are many debates about the emergence of sexuality, but most agree that it is connected at some point with both the early satisfaction of drives (nourishment, elimination) and the infant’s relations with the primary caregiver. Witness Carr’s “Morning Sun #410,” in which a woman wearing stockings, cowboy boots and silky black lingerie is summoned by a male child just out of frame by the evocative pull of the robe’s tie.

These early relationships are often wrapped up in the messiness of bodily care and the establishment of new personalities, but their representations can seem saturated with the heaviness of survival and fantasy. One of Carr’s narrative series begins with a photograph (below) depicting a room whose walls display a couple of jungle animal murals and are also childhood-beleaguered. A close look reveals nicks, stains and sticker remnants, from images of Batman to words like “Wonder Power” and “terror.” The shadow of a boy in a superhero costume looms menacingly over the scene, in which his mother’s body lies sprawled across the stripped bed.

In the second photograph, the shadow reads like an explorer perched on high ground, though in reality the son, dressed as the Flash, is atop his mother’s body, whose head is lowered in a supplicating manner. In the final photo (below), the mother sits alone on the son’s bed, neither triumphant nor really defeated: she has survived the play attack, two words that fit nicely together in this exhibit.

Indeed, the most successful aspect of this new work is its ability to embrace ambiguity in a realm that our culture manically guards as sublime, to represent ugliness and the struggle of motherhood without reducing its complexities or erasing its conflicting realities. Carr captures dominance and abjection without denying her subjects their self-possession, even when evidence of this is as slight as a gaze in a mirror.

The fantastic scenes that evoke such strong and well-known cultural tropes are a blend of careful construction and generous relation with her subjects. While some of the shots are theatrically directed, their contexts and meanings read as very believable. Students of art history will notice visual references to Bernini’s “The Ecstacy of St. Teresa” and Duchamp’s “Étant Donnés,” among others. The most overt reference is to Dorothea Lange’s “Migrant Mother,” in “Morning Sun #1524.” 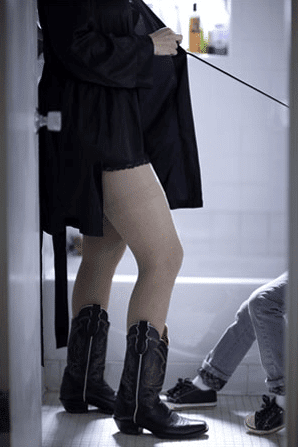 Its video companion, “Day is done, gone the sun,” co-produced with Bill Orisich, presents an interesting up-tilted view of a day in the life of a mother and her two children. Its strength lies in its ability to encompass the intimacy of singing in a sun-touched living room and the mundaneness of breast feeding in a laundry-riddled carport, as well as the anger of a child who feels ignored when the mother plays her cello.

During this tantrum, the little girl yells at her mother about excrement somewhere that needs cleaning up — yet another example of how deftly Carr incorporates psychoanalytic themes into the unglamorous, everyday details of motherhood. The girl screams “Clean it up!” but then also thoughtfully adds “Mama,” playing out her vacillating needs to both destroy the bad mother who ignores her and to restore the one she loves. At times, Carr guides the viewer to compare how the woman handles her daughter with the attention she pays to tuning her cello, underscoring the paradox inherent in relationships that require such deep sacrifice and connection.

The love and hate in “Morning Sun” brings to mind Mignon Nixon’s work in the mid-1990s, especially her essay “Bad Enough Mother,” in which Nixon posits that the work of many female artists is now operating in a paradigm outside the psychoanalytic theories of Sigmund Freud and Jacques Lacan. Her work opened the door to new psychoanalytic interpretations of artwork that did not always reduce it to patriarchal power structures.

It has been said that the lullaby “Rock-a-bye Baby,” which wraps a mother’s hate (“the cradle will fall”) into a socially acceptable song, enables her to express her frustrations and feelings of being compromised within the caring acts essential to child rearing. Carr’s visual narratives are not so different, eliciting the darker moments of motherhood within a well-constructed visual practice.