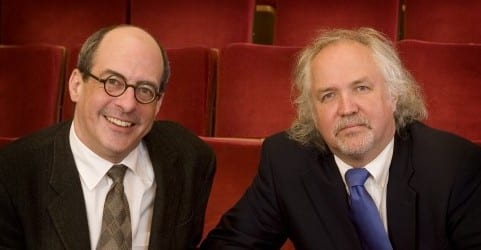 On the same day that conductor Donald Runnicles makes his first appearance on the podium this season with the Atlanta Symphony Orchestra, ASO President Dr. Stanley E. Romanstein made a surprise announcement that Runnicles has agreed to extend his appointment as Principal Guest Conductor through the 2013-14 season.

“Robert Spano and Donald Runnicles have a superb artistic partnership here at the Atlanta Symphony,” said Romanstein. “Together, they have created a bond with not only the musicians of this orchestra, but with our community — the people of Atlanta.”

Spano and Runnicles are currently in the 11th year of that artistic partnership, part of a groundbreaking collaborative leadership model the ASO adopted and has since proven a successful exemplar for other orchestras to emulate.

In memo sent to the ASO staff yesterday, Romanstein recalled that when he arrived at the ASO in May 2010, he was posed the question of what the orchestra would do when Runnicles’ current appointment concluded in 2012. “I talked with Robert at some length about Donald’s many contributions and about the unique nature of our artistic partnership, and the answer seemed obvious:  persuade Donald to stay!” Romanstein said. “I’m thrilled, as are Robert and our musicians.”

The ASO announcement echoes the BBC Scottish Symphony, which opened its season four months ago with an announcement that Runnicles will continue as its  chief conductor through 2015. He has held that post since 2009.

But Atlanta has become close to Runnicles’ heart. “The excitement and fulfillment of working with the Atlanta Symphony Orchestra deepens for me each year,” he said. “I have such confidence in both this orchestra and Robert’s leadership, and look forward to continuing our musical partnership.”

Runnicles will post large frequent-flyer miles. Aside from his positions in Atlanta and Glasgow, he’s also general music director of the Deutsche Oper Berlin and music director of the Grand Teton Music Festival in Jackson, Wyoming. Runnicles has recorded four CDs with the ASO, three of them with the ASO Chorus, which has also traveled with him three times to Germany  to perform with the Berlin Philharmonic.

In tonight’s concert with the ASO at Symphony Hall, which repeats Saturday and Sunday, Runnicles will conduct Ludwig van Beethoven’s Symphony No. 3 and Benjamin Britten’s Violin Concerto with violinist James Ehnes as soloist.