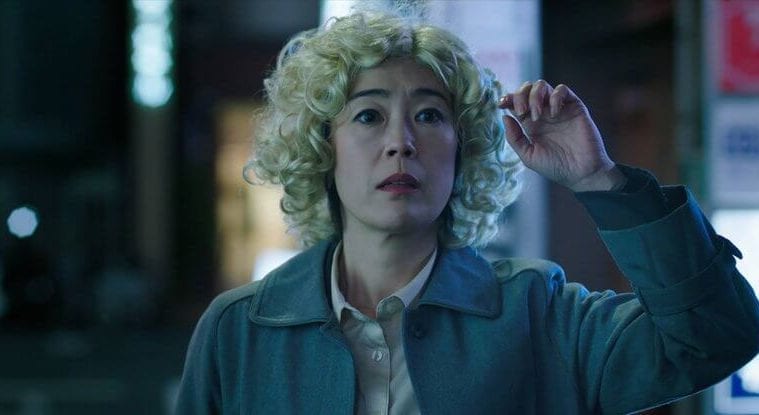 Review: “Oh Lucy!” as moving as it is funny; “Loveless” sinks from its unrelenting seriousness

Standing on the platform of a gray Tokyo train station, 40-something Setsuko (Shinobu Terajima), like many of the other commuters crowded around her, is wearing a sanitary paper mask over her mouth and nose. What you notice most, above that patch of white, is the sadness in her eyes. It’s your first signal that, while Oh Lucy! paints its opening scenes with cartoonish humor, a deeper current runs beneath this funny but ultimately moving film.

As nondescript as the drab, impersonal office where she works, Setsuko has only a few pleasures: cigarettes, beer and hoarding. Her tiny, oppressive apartment seems to have no furniture, only piles of crap she’s bought and hasn’t bothered to organize. Her half-buried life gets a jolt when her niece Mika (Shioli Kutsuna) invites her to the theme-park of a restaurant where she works (waitresses wear French maid uniforms and coddle guests like royalty) to ask her for a favor. Will Setsuko pay for and take the remaining English-language classes Mika signed up for but now lacks the time to continue?

Reluctantly, Setsuko agrees. In a building that resembles a sex club more than a school, she finds herself alone with a hyper Californian tutor named John (Josh Hartnett, sweet and committed). His unique approach to teaching “American English” requires Setsuko to assume a new identity in the classroom, complete with a ratty blond wig and a Western pseudonym, “Lucy.” John’s self-appointed role as a US cultural ambassador also includes lots of high-fives and hugs.

If Setsuko’s eyes conveyed her core sadness in the movie’s opening scene, the way she closes them as she returns John’s hug tells us even more. Soon, Oh Lucy! becomes an eccentric road movie as she travels with her estranged older sister Ayako (Kaho Minami) to Los Angeles, where John has returned (with Mika!) after abruptly ditching his teaching gig.

Co-writer and director Atsuko Hirayanagi, like many visitors before her, dwells on the tatty, neon wastelands (both inviting and repulsive) of the sprawl we call Southern California (oil derricks, strip malls.) Her focus, though, remains on character as Setsuko and Ayako bicker — and as Setsuko/Lucy opens herself to new possibilities. Yes, there is a Setsuko-gets-stoned scene and a Setsuko-gets-a-tattoo scene. But these are tethered to an emotional reality. We’re cued to cheer Setsuko on while fearing the worst. (While doing absolutely nothing to invite our identification, actress Kutsuna makes us invest pretty deeply in the character’s fate.)

It turns out that the grievance between the sisters springs from a single man — Setsuko’s long-ago boyfriend, who was stolen away by Ayako. This uneasy bit of history hovers over all the decisions the women make in California — whether good, terrible or borderline tragic. Mika, too, seems to have had her own bad chapters with men; Ayako’s hints about her daughter’s instability eventually seem well founded. Not helping anything is Setsuko’s discovery that, as charming as John can be, he’s a charming, walking disaster with skeletons in his own closet.

I can’t honesty explain why the movie works. Seen in broad outline, it shouldn’t. But director Hirayanagi — abetted enormously by her leading lady, with her simultaneously veiled yet enormously communicative face — manages to steer a middle ground between silliness and depth. The movie also benefits from brief but vital support by the wonderful Japanese actor Kôji Yakusho (long-ago star of Shall We Dance?) as another of John’s students.

If Oh Lucy! only gradually reveals the seriousness at its center, Loveless sets its grim tone immediately, starting with the title. I still recall the shivery sensation I felt when watching writer-director Andrey Zvyagintsev’s 2003 feature debut, The Return, an allegorical, visually stunning fable about two boys going on a perilous camping trip with the father they’ve never really known. It was mournful, biblical, unshakeable. That may still be my favorite of his films, though I liked Elena and loved his rotten-state-of-Russia indictment, Leviathan. (How the filmmaker still manages to operate in the homeland he regularly criticizes remains a mystery.) Loveless is grim to a fault.

Oscar nominated for Best Foreign Language Film (the terrific Chilean drama A Fantastic Woman won), Loveless centers on a couple, Zhenya (Maryana Spivak) and her husband Boris (Aleksey Rozin), who are divorcing with as much animus as possible. The welfare of their 12-year-old son Alyosha (Matvey Novikov) barely occurs to them, as we see from one of the film’s most devastating images: the boy sobbing uncontrollably after overhearing his parents argue about which of them should be saddled with his custody.

The adults here are rotten excuses for humans. Each already has a lover, and Boris has already impregnated his, Masha (Marina Vasileva). The fact that their marriage was both caused and ruined by Zhenya’s unplanned pregnancy with Alyosha suggests that Boris has learned nothing. Neither has Zhenya, because her fixation on her new boyfriend suggests she’s simply using him as an escape from her life, in much the same way she previously used Boris as leverage to leave her horrible mother (Natalya Potapova).

You’ll spend more time than you may want to with Zhenya and Boris as they reluctantly pretend to care after Alyosha runs away from home. (They don’t even notice he’s missing until almost two whole days have passed.) The plot may be meant as a metaphor for the ways contemporary Russia, under the self-serving grip of Putin and his oligarchy, are betraying the rising generation of the nation. But despite director Zvyagintsev’s reliably sinuous, controlled filmmaking, Loveless too often comes off as just a relentless bummer.