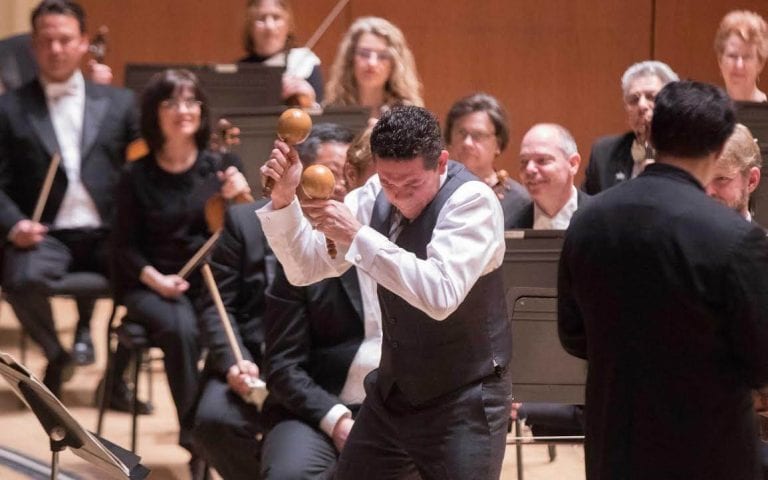 Alcides Rodriguez normally plays clarinet for the Atlanta Symphony Orchestra, but moved out front Thursday night to play another instrument he has mastered: the maracas. (Photos by Jeff Roffman)

Review: ASO grooves to a Latin beat under baton of conductor Miguel Harth-Bedoya

On Thursday evening at Symphony Hall, the Atlanta Symphony Orchestra performed a concert of music by López, Lorenz, Piazzolla and Ravel, led by guest conductor Miguel Harth-Bedoya. There were two featured soloists: accordionist Ksenija Sidorova and, in an intriguing turn, ASO clarinetist Alcides Rodriguez playing maracas. The program will be repeated on Saturday at Symphony Hall.

The mostly Latin American-fueled concert opened with the 2017 orchestral suite “Bel Canto: A Symphonic Canvas” by Peruvian composer Jimmy López, drawn from the music of his 2015 opera, Bel Canto, based upon the eponymous 2001 novel by Ann Patchett, which was loosely inspired by the four-month Japanese embassy hostage crisis of December 1996 to April 1997 in Lima, Peru, and in which opera serves as a pivotal theme.

The music in the half-hour suite from the López opera is mostly sweeping and blustery, elements pivoting from tense to heroic in sentiment, but while that was the case for the vast majority of the suite, there were some intimate, emotionally tender moments, most notably within the second movement. Like López, Harth-Bedoya is Peruvian, and it stands to reason the he is fully engaged in the music of his fellow countryman, as by the story behind the credible music.

Mutual national heritage was also at play in the Concerto for Maracas (“Pataruco”) by Venezuelan American composer Ricardo Lorenz, who is based in Chicago. The maracas soloist for this performance was Venezuelan-born ASO clarinetist Alcides Rodriguez. Although primarily known for playing clarinet and bass clarinet in the orchestra, since his arrival in the United States in his college years, Rodriguez also seriously took up the Venezuelan maracas, in part as a tangible reminder of his native land and culture.

Although the Venezuelan maracas may seem simple and monochromatic to the uninitiated, the actual range of techniques are extensive and subtle, lending a remarkable spectrum of rhythmic and articulatory expressiveness to the instrument. Both Lorenz’ engaging score, in which the orchestration allows the solo instrument to be well heard, and Rodriguez’ performance brought out these myriad of nuances, as well as an all-important “spirit of the rhythm” that gives Venezuelan music an intuitive groove that feels right. Part of the fun was also watching Rodriguez play, as maracas techniques appear to mandate body movement and gesture that might as well be classed as dance – perhaps a necessary symbiosis of arts. As mentioned in the program notes, and in an interview, Rodriguez lovingly dedicated his performance to the children of Venezuela.

After intermission, the Latin American theme continued with the Concerto for Bandoneón (“Aconcagua”) by Argentine composer Astor Piazzolla. Although written for Piazzolla’s own instrument, the bandoneón — a type of concertina particularly popular in Argentina, Uruguay and Lithuania — in Thursday’s concert Latvian accordionist Ksenija Sidorova played the concerto on a large, free-bass keyboard accordion that is more familiar to most North Americans and Europeans. Given how few expert bandoneón players are to be found anymore in the United States, the concerto is often played on such an accordion, although bandoneón virtuosi can be found internationally — as when the Atlanta Opera brought in esteemed Argentine bandoneón player Daniel Binelli, who played in groups with Piazzolla, for their production of the composer’s tango opera, María de Buenos Aires, last year.

Nevertheless, Sidorova played the part expertly, with fluent, fluid technique, and featuring stylistic elements associated with bandoneón, in terms of expressive nuance, including subtle techniques like a particular left-hand bellows vibrato, sounding characteristic of bandoneón playing. Unfortunately, during loud passages, the orchestra overwhelmed Sidorova’s instrument, making those nuances hard to hear. They stood out better in sparsely orchestrated passages, or where accordion played alone. They were heard at their most lucid when Sidorova returned to the stage to play “Malagueña” solo as an encore.

The concert closed with a departure from the strictly Latin American theme with French composer Maurice Ravel’s most famous composition, “Boléro” — which is reflective of the slow Spanish dance of that name. It is known for its incessantly repeated theme, built up in the orchestration in a long, slowly developed crescendo over the work’s entire 15-minute duration. It’s a piece that never fails to be a crowd-pleaser, especially when performed well as by Harth-Bedoya and the ASO in Thursday night’s concert.

Harth-Bedoya kept his conducting gestures well hidden from the audience’s perspective at the work’s extremely pianissimo beginning. It was only as the long, well-paced crescendo grew that his hand and arm movements became fairly discernible out in the hall. Over the course of the performance, the crescendo slowly came to full bloom, and only in the work’s penultimate fortissimo bar did it finally escape its persistent, driving rhythmic pattern, with a flourish, closing with a big C major chord on the first beat of the final bar.

Prior to the orchestral concert, on Thursday evening only, ASO musicians performed another of their 6:45 p.m. chamber music programs. It opened with three movements from Astor Piazzolla’s “Histoire du Tango,” performed by flutist Christina Smith and harpist Elisabeth Remy Johnson. Originally for flute and guitar, the guitar part was transcribed for harp by Johnson. The three movements were “Bordel 1900,” “Nightclub 1960” and “Concert of Today 1990,” each representing a different historical era in the evolution of Argentine tango.

Up next was a wonderful musical discovery, the Quartet for Bassoon and Strings No. 1 by Bernard Garfield, the American bassoonist and composer who was principal bassoonist of the Philadelphia Orchestra from 1957 to 2000. It was performed by bassoonist Anthony Georgeson, violinist Justin Bruns, violist Madeleine Sharp and cellist Thomas Carpenter. Georgeson assured the audience that although Garfield, who turns 94 in May, was unable to be present in person, he was listening to the performance via Facebook streaming. Garfield wrote the quartet in 1950, during the years in which he was most active as a composer, and it serves as a fine representation of new American music from that era.

To conclude the program, Carpenter returned to the stage, joined by violinists Sissi Yuqing Zhang and Christopher Pulgram and violist Yang-Yoon Kim for two movements from the virtuosic String Quartet No. 1, Op. 20 by Alberto Ginastera, impressively capping off the admirably played chamber music concert.