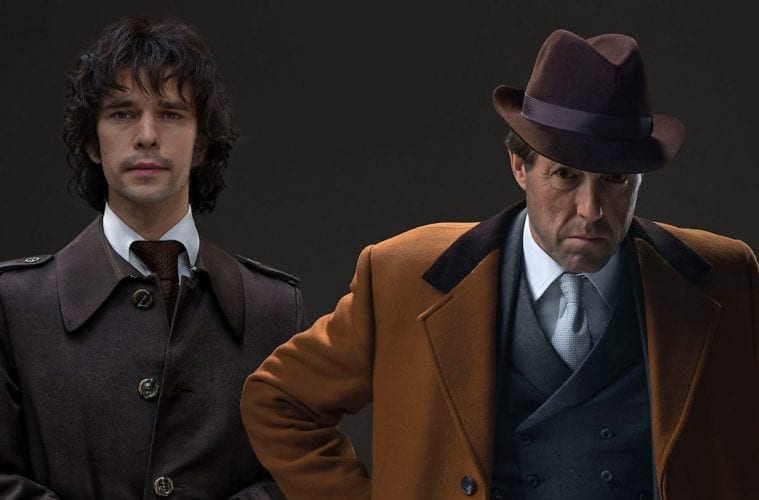 June was Pride month, and streaming platforms commemorated it with several notable LGBTQ offerings available on Netflix and Amazon Prime. Two of these, both British period dramas, are exceptional.

I’m always glad when Amazon Prime offers something that competes in quality with Netflix originals. The three-part A Very English Scandal definitely does. Based on a stranger-than-fiction true story, it’s the tale of Labour Party minister Jeremy Thorpe (a nigh-unrecognizable Hugh Grant), a closeted gay man in the early ’60s United Kingdom, where homosexuality was still illegal.

Thorpe’s sexual bona fides are conveyed in a dryly witty opening scene as he lunches with fellow Parliamentarian Peter Bessell (Alex Jennings), who hints that he himself has dabbled in same-sex affiliations. Thorpe, amazed, asks, “Are you telling me that you were usable?” (I doubt I’m the only viewer who’s hearing that adjective used that way for the first time.) The terrific script is by Queer As Folk creator and longtime Doctor Who show runner Russell T. Davies, and all three episodes are directed by the great Stephen Frears (The Grifters, Dangerous Liaisons, The Queen).

In a moment he surely must have regretted, after coming out to one another, Bessell promises to protect Thorpe, politically, in any way he can. Thorpe soon takes him up on that offer when his young, erstwhile lover — unstable stable boy Norman (Ben Whishaw) — sends a 17-page letter to Thorpe’s steely mother (a steely Patricia Hodge), detailing his affair with her son and asking for the grand sum of £30.

In one of the show’s best running jokes, Norman is not after blackmail money or fame. He simply wants the National Insurance card he lost, which Thorpe promises, and fails, to have reinstated. In flashback, we see the start of Thorpe and Norman’s relationship: a clinical transaction in a guest bedroom of Mrs. Thorpe’s home, involving a jar of Vaseline and the memorable line, “Just hop onto all fours — there’s a good chap.” What follows is a semisweet interlude in London, with Norman living as a kept boy in a bedsit, while Thorpe’s political ambition increases.

Everything falls apart spectacularly, ultimately leading Thorpe, years later, to arrange having Norman murdered by a cadre of low-rent crooks as competent as the knee-whacking thugs of I, Tonya. It’s a sensationally ridiculous, very smartly rendered tale. Even if the subject matter sounds appalling, it’s worth taking a look to revel in Grant’s jowely, lizard-like performance — a far remove from his stuttering, bashful rom-com days. He’s loathsome and fantastic. So is Whishaw as the feckless Norman, alternately sweet and needy, then melting down in tantrums. It’s a quicksilver performance that helps you understand how the man could have been both magnetic and repellent all at the same time.

Man in an Orange Shirt

Another period drama about the love that still dared not speak its name (or risked jail time), this one fictional and with no threat of a murder plot, Man in an Orange Shirt is available for GPB supporters who have PBS Passport streaming access.

Divided into two parts, the first hour launches during World War II and continues through the following, repressive decade. Former school classmates Michael Berryman (Oliver Jackson-Cohen) and Thomas March (James McCardle) meet again as soldiers, and their reunion gradually leads to a kiss on the evening they’re redeployed to separate arenas. Cut to postwar London, where Michael hesitantly tracks Thomas to the shabby atelier, where he works as a painter, and the two hurl themselves at each other.

An idyllic, sexy vacation in the countryside comes to a bitter end when Michael casually mentions that he still intends to marry his longtime fiancée, Flora (Joanna Vanderham). “You surely didn’t think we could set up house together, like man and wife,” Michael scoffs. Yes, Thomas did. Not long after the wedding, Michael himself starts to reconsider the emotional sanity of conforming to the era’s heteronormative strictures. The rest of the story, beautifully acted, comes across as a kind of bittersweet, gay descendant of Brief Encounter or a variation on E.M. Forster’s Maurice (which coincidentally starred Hugh Grant).

The second half of Shirt unfolds in the present day, focusing on Adam Berryman (Julian Morris), a dating app-addicted, one-night-stand guy who doesn’t know that his own grandfather was, like himself, gay. The modern-day story of Adam battling his internalized homophobia and learning to love a considerate young designer, Steve (David Gyasi), doesn’t have the emotional heft (or period-era charm) of the first half. But it allows for a ferocious performance from Vanessa Redgrave as the older Flora, Michael’s widow for many years, who still hasn’t come to terms with her husband’s sexuality. The drama’s resolution requires a too-easy emotional reversal for one of its characters. That shortcut aside, Man in an Orange Shirt lands with resonance for anyone who has made a wrong decision and wishes for a redo.

On the comedic side of things — well, sort of — Netflix’s Hannah Gadsby: Nanette introduced me to a Tasmanian comedian whose name I’d never heard before, and who’s now lodged herself irreversibly into my consciousness. In its first 10, 15 minutes, Gadsby’s hour-long standup feels free-form. Gradually, it becomes clear that — however spontaneous she appears — this is a rigorously constructed and controlled work of comedy, drama, autobiography and social commentary. It’s hilarious, then it’s intense. I was reminded of Lily Tomlin’s one-woman 1980s stage show The Search for Signs of Intelligent Life in the Universe, which begins as a light comic excursion then grows emotionally piercing.

Often perceived, at a distance, as a “bloke,” Gadsby recalls having to leave her small-town, Bible-belt part of Tasmania when she realized she was “a little bit lesbian.” Her sexual identity has been part of previous routines, she acknowledges, though feedback from one woman that her shows lack “enough lesbian content” goads her. That becomes a running joke, and a crucial part of the narrative she’s carefully, smartly assembling.

I don’t want to spoil the surprise and the pivot of the show’s last 20 minutes, as Gadsby reveals what makes her question the validity of being a comedian. Experience that yourself. Let’s just say I’ve never seen an art history major (as Gadsby was) analyze the canon of Western (male) painters, especially Picasso and van Gogh, in such a surprising way. Highly recommended, but fair warning: it’s not just funny.

For this month’s documentary deep-dive, check out Netflix’s deeply engrossing The Staircase. I watched the first multi-episode installment of this when it first aired on TV in 2004. Since then, director Jean-Xavier de Lestrade has updated the story, in 2013, and now with three more episodes that bring things to an ambiguous end. Staircase is the tale of Michael Peterson, an American novelist living in Durham, North Carolina, whose second wife, Nortel executive Kathleen, was found dead at the foot of their staircase. What initially seemed an accident was gradually deemed a case of foul play when investigators learned that, sexually, Peterson wasn’t the complete straight arrow people assumed. Whether or not his bisexuality may have been the cause of a fatal argument between the spouses, it definitely triggered tabloid-flavored coverage of his trial and lurid innuendo in the courtroom.

Did Peterson murder his wife? At the end of 13 hours, you still won’t know. Whodunnit is not what makes the series fascinating. Instead, it’s the focus on the relationship that Peterson — smoothly arrogant and his own worst enemy in the ways he presents himself — has with his children, young adults who soldier on in support of their dad over many harrowing years. Of even greater interest is the dispiriting portrait Staircase paints of the US legal system. By the end of its examination of the ways a trial can be skewed by investigators and faux “expert” witnesses, you will never want to break the law and face a so-called jury of your peers. “Anybody who believes in the justice system, raise your hand,” Peterson says wearily near the end of his ordeal. You’ll understand why no one does. Secret City follows a journalist as she unravels a government conspiracy.

Also on Netflix, the Australian series Secret City will appeal to anyone in need of a good conspiracy fix. I’ve watched four of the show’s 12 episodes (spread across two seasons). Anna Torv (of Mindhunters and Fringe) plays Harriet, a journalist working in Canberra, Australia’s scenic seat of government. Perhaps a bit conveniently, Harriet is rowing on the central lake one morning just in time to witness police dealing with the corpse of a male college student they claim has drowned — though Harriet herself sees he’s been gutted open.

That’s because the boy had swallowed a SIM card with secret information that somehow makes dangerous connections among the Chinese and Australian governments. The cast includes Oscar nominee Jacki Weaver (good) and Dan Wyllie (dull) as two sparring members of Parliament, and Damon Herriman as an intelligence analyst named Kim. A transgender woman, she’s a fascinating character even before we learn she’s Harriet’s ex-husband. I’m looking forward to following the twisty drama wherever it leads, though I regret the early exit from the series of one of the main players.

Now for a couple of quick hits. Though I liked her takedown of the Trump administration at the White House correspondents’ dinner, I felt pretty indifferent to Netflix’s weekly The Break with Michelle Wolf. I may sample future shows, but she seems to be trying too hard, and the fake commercials didn’t hit their marks. But for a quick, easy laugh, check out Nailed It! A critique/celebration/deconstruction of all the cooking shows out there, this one features, um, extremely nonprofessional cooks competing to recreate expertly baked, artisanal creations (you know: cakes made to look like magical castles, complete with working waterfalls). There’s a weird kind of joy to be had in these cooks’ inept results.

I also watched the original Netflix movie Ibiza, which wants to be a variant on Girls Trip, but doesn’t make it. Gillian Jacobs stars as a workaholic who goes to Spain to close a business deal, then spends her time there getting drunk and high with the two best pals, failing to do her job and lusting after an EDM deejay (Game of Thrones’s Richard Madden). It’s all supposed to be fun, but I didn’t care what happened to these people.

Back on Amazon Prime, if you’re looking for good — and very different — movies, I recommend Martin Scorsese’s The Age of Innocence; Greta Gerwig’s multiple Oscar nominee Lady Bird; The Disaster Artist, about the making of the wretched indie The Room; and Frailty, an overlooked Southern Gothic thriller starring Matthew McConaughey and directed by the late, lamented Bill Paxton.

And back on Netflix, the second season of GLOW is now streaming (you know, the fictional comedy about the real-life Gorgeous Ladies of Wrestling). And lovers of gritty, terrifically acted British cop series, if you haven’t already watched both seasons of Happy Valley, what are you waiting for? (One bit of advice: Turn on the subtitles; that Yorkshire accent is a killer . . .)