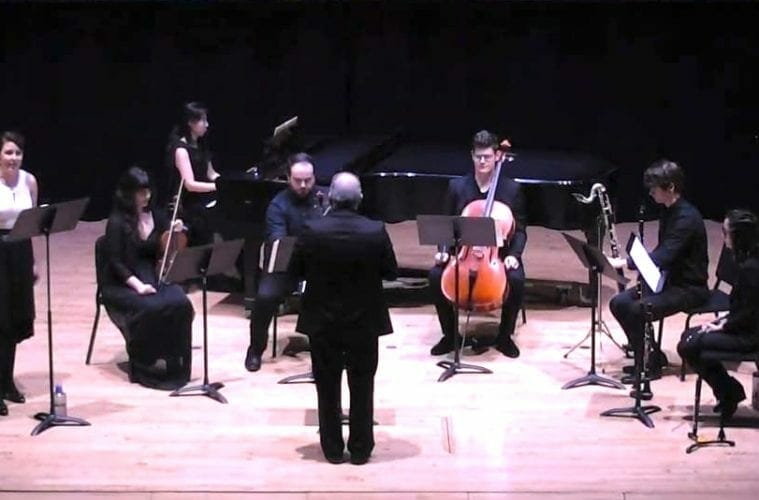 Tuesday evening, a superb student ensemble played Schoenberg’s Pierrot Lunaire, a vivid nightmare bathed in gorgeous moonlight. This inscrutable half-hour melodrama from 1912 ought to be a cult classic. Instead, just a handful of people were in the seats at Georgia State University’s Florence Kopleff Recital Hall.

It’s a world we still inhabit as we binge-watch psychological thrillers and turn lurid art into memes. Edvard Munch’s painting The Scream, which speaks to everyone suffering a personal crisis, looks the way Pierrot Lunaire sounds, at once disorienting and intoxicating.

Yet people continue to think badly of Schoenberg. So the film could star Wallace Shawn as the neurotic, short, bald protagonist. Like Amadeus, it would be a series of juicy flashbacks: a misunderstood genius who rips up the rulebook of musical composition; a hot mess of a personal life, of torrid sex scandals and suicide; and a Faustian bargain that grants our hero the power to create a musical style that will dominate the world. It’s set in the heady days of Freud — exposing our darkest subconscious — and worldly innocence as Europe hurtled toward the true horrors of World War I. The seedy but thrilling 1920s of Berlin comes next. Cabarets, decadence, political violence, Einstein peering into the future — all accompanied by Schoenberg’s unsettling, Expressionistic music.

After the Nazis win Germany’s heart, the scene shifts to creative exile in vapid Southern California, where artistic hubris inevitably returns Schoenberg’s riches back into rags. He dies a broken, vilified man — with his powerful music yet to be appreciated. Roll credits.

Critics interested in strict historical accuracy would howl. But a tormented artiste movie would shift public opinion. By discovering his life as a wannabe Old Testament prophet, we’d finally understand Schoenberg. We’d get his art.

As part of Georgia State’s NeoPhonia series, this Pierrot ensemble — six virtuosic players, plus vocalist Leah Hedrick — was organized and conducted by Stuart Gerber, a GSU professor, percussionist and one of Atlanta’s leading New Music advocates.

It was a helpful idea to start the show with a concise introduction — “Old Masks, New Faces: The Characters of Pierrot Lunaire” — from GSU music professor Marie Sumner Lott. In images and words, she touched on the era’s obsession for traditional commedia dell’arte archetypes: the clever Harlequin, the fetching Columbine, the pompous Cassander, the hapless Pierrot who influenced countless artists from Picasso to T.S. Eliot to Stravinsky. (As a local composer mentioned to me before the show, we are today further away in time from Pierrot than Pierrot was to Beethoven.) Vocalist Leah Hedrick was the star of the evening with her interpretation of “Pierrot Lunaire.”

A link to the Austro-German chain that stretched from Brahms back to Bach, Schoenberg was, by his own description, “a conservative forced to become a revolutionary.” Sensing the collapse of traditional harmony which had been in place for half a millennium, Schoenberg cut loose the need for music to be in a specific key, in a period that lasted about a dozen years from 1908 till about 1920. He embraced this untethered style — free atonality — the way hippies in the 1960s embraced peace and free love.

Commissioned by an actress who wasn’t really a singer, Pierrot has the composer set Albert Giraud’s poetry (in German translation by O.E. Hartleben) in a hazy zone somewhere between singing and speech. The 21 songs, with Columbine as the narrator, unfold as three increasingly unsettling parts — lovely images twisting around morbid thoughts. First, Pierrot is intoxicated with the moon, which triggers fantasies about love, sex and religion. Part two gets weird, in a nightmare of guilt and punishment, where “Obscure black giant moths killed the sun’s splendor.” In the final section, he sails home, looking to restore innocence. Beautiful lines like “the moonbeam is the rudder, the lily serves as the boat” against atonal turbulence adds to our anxiety as listeners. But the feelings are so raw, the musical colors from the small ensemble so fresh sounding, the drama so tightly paced, that you can’t help but fall into Schoenberg’s web.

Throughout, Leah Hedrick was the star of the evening, and her vocalizations were spot on. The required vocal range is extremely wide, and she growled her low notes and squeaked out high notes with equal intensity. She let out a ghoulish shiver in the song “Valse de Chopin,” fully inhabiting her role on the brink of madness — in an instant spinning from a nasty scold to a lovable and deeply sympathetic character. In the end, it was hard to resist her charms, hard not to feel seduced in all the emotions by moonlight.