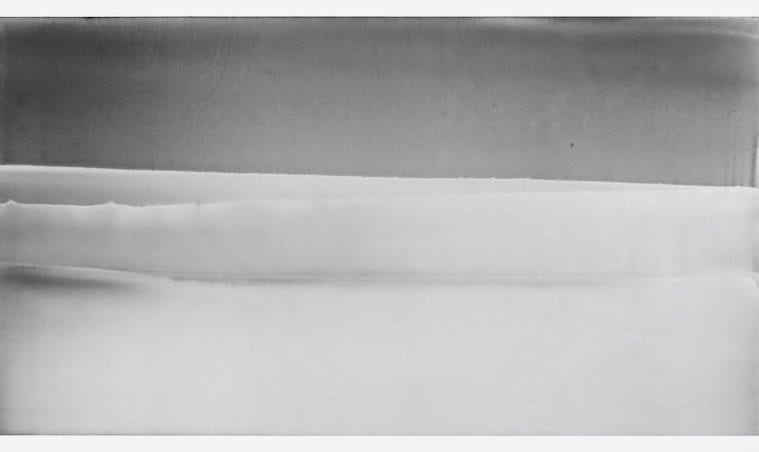 This work, from Seana Reilly's "Unbound Atlas" series, is ink and graphic on panel. Her exhibit with fellow artist Morgan Alexander, titled "paper kites / uncertain sky," is at Whitespace through March 12. (All images courtesy of the gallery)

The title of Seana Reilly and Morgan Alexander’s paper kites / uncertain sky (at Whitespace through March 14) suggests fragile objects carried aloft in changeable environments. That is, in fact, the emotional tone communicated by these extraordinarily subtle works on paper.

Reilly’s ink and liquid graphite media are never more than partially under the artist’s control, heightening the effect of unstable weather without being literal skyscapes. Or are they? A clear horizon line is always present, as are forms that are almost but not quite cloud banks. The quality of “not quite” is predominant, heightening the intended sense of uncertainty in which neither artist nor viewer is assured of an unambiguous outcome. Morgan Alexander works with paper, paint, wax, silk and etched glass, as in this untitled piece.

Alexander’s abstractions often give the impression of a sky shrouded in clouds or sheets of mist. When they do not appear nearly invisible, the shifting tones created by combining paper, paint, wax, silk and etched glass achieve a condition that is simultaneously energized and empty. The artists have found their own distinct ways of embodying the metaphysical insights of Buddhism, the transient arrangements of the world like water droplets suspended as cloudy masses in the wind or bubbles clustered on the disturbed surface of a liquid.

As befits a show incorporating the world’s shifting surfaces, there actually is an immense amount of variety in the effects captured by Reilly and Alexander in their own separate ways. Reilly’s 6 by 6-inch Unanchored Line series is distinguished from the 23 by 13-inch Unbound Atlas by far more than size; the tears and scuffs of Alexander’s mottled found paper mounted on different paper feels both solid and fragile, conveying the lessons of the multimedia works in an almost diametrically opposite way. This still is from Adam Forester’s “Archive(d),” which is in the gallery’s Whitespec project room. It captures the demolition of the Georgia Archives building.

Their exhibition combines brilliantly with Adam Forester’s Archive(d), in the Whitespec project room. It would be a shame to ruin the effect of Forester’s short video of clouds of dust surrounding the demolition of the Georgia Archives building, which Forester combines with an audio piece of comments about the destruction and a piece of signage listing notable buildings in Atlanta and their date of demolition. The overall effect forms a more worldly complement to the visual poetry of Reilly and Alexander’s evocations of evanescence.