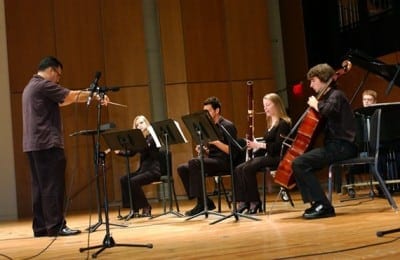 “NeoPhonia fills a gap between Bent Frequency and Sonic Generator,” Atlanta ensembles that often explore the 20th-century European avant-garde or the latest trends in contemporary classical music, explains Demos, NeoPhonia’s artistic director and a professor at GSU. Since he launched the NeoPhonia series in 1996, it has logged 62 concerts, including the world premieres of 65 works, mostly by local and emerging composers, including many by Demos himself. (Disclosure: My own music has been performed by NeoPhonia over the years; one of those concerts was reviewed here.)

The October 4 program will add three premieres to that number, making NeoPhonia, by its founder’s reckoning, the oldest active series in Atlanta devoted to nurturing and promoting music from the 20th and 21st centuries. Demos calls Tuesday’s concert “a good example of the diversity of composers now working in Atlanta.”

Singleton is the established elder statesman among the composers represented, with a longtime international reputation. Born in Brooklyn, he studied at New York University and Yale, then went to Italy as a Fulbright Scholar. After 14 years in Europe, he returned to the United States at Robert Shaw’s invitation to become composer-in-residence with the Atlanta Symphony Orchestra from 1985 to 1988. He liked Atlanta and stayed.

In a 2003 interview, Singleton told me: “The city is very protective in the sense that nobody bothers you. You’re not bombarded the whole time by so many events, or noise for that matter. I travel a lot, but I’m always happy to come back here. My friends in ‘big’ places always wonder, ‘Why are you staying there?’ I’m staying here because I’m productive, I’ve got a community of friends, and my wife — I met my wife, Lisa, here. And I’ve had significant work done here.… I’ve really got a lot of respect within this community.”

Among Singleton’s other high-profile commissions is another from the ASO, scheduled for later this season. The upcoming NeoPhonia concert will include Singleton’s “Jasper Drag,” which the composer told me was “written to commemorate the incident that happened in Jasper, Texas, where a black man, James Byrd Jr., was dragged to death behind a pickup truck by three white men. It isn’t meant to tell a story or evoke images, but to be a marker on our collective memory. Titles are how I identify my pieces. What it has to do with my music, there’s no telling. [My compositions] are never, never programmatic.”

The work was recently recorded by violinist Helen Hwaya Kim, clarinetist Ted Gurch and pianist Laura Gordy for future release on CD, and that trio will perform it Tuesday. Gordy’s considerable involvement with Singleton’s music goes as far back as the founding of the (now defunct) new-music ensemble Thamyris in 1987. It’s the kind of longtime, ongoing collaboration between Atlanta composers and performers that is necessary not only for building their reputations, but for growing the well-being of the city’s artistic community at large.

Another noteworthy name on Tuesday’s program is Nicole Chamberlain, a rising star on the Atlanta musical scene. Much attention has been given her chamber opera “Rabbit Tales,” a commission by the Atlanta Opera’s education department and the first in the company’s 32-year history. Its world premiere is scheduled for October 29 at the Wren’s Nest.

But 2011 has already been a busy year for the composer. February saw the premiere of her “Tamar,” a flute quartet, at the University of Alabama-Huntsville’s New Music Festival, where she played alto flute. (Demos was there too, in the audience.) In June, Chamberlain and husband Brian premiered “Valentine,” for flute and guitar. In mid-September, the Dahlia Flute Duo premiered “Chatter” at the Congress of the International Alliance for Women in Music in Flagstaff, Arizona. The following weekend, the composer performed it in Atlanta with fellow flutist Jessica Sherer.

Much of Chamberlain’s music involves flute, and it very often involves herself as performer. But like “Rabbit Tales,” this Tuesday’s premiere, “Nautica,” for solo piano, is an exception.

“In the past, my work hasn’t been performed much in Georgia unless I am performing it,” says Chamberlain. “So its really exciting that finally my stuff is starting to get performed by other people where I live. Don’t get me wrong, I love to travel, but it’s nice that I can sleep in my own bed for a change.

“It had been years since I had written a solo piano work, and I was due,” she adds. “I try to write for specific performers, but this time I indulged in writing for the practice of composing.”

Demos invited Chamberlain to take part in the “Red Clay Connections” concert, as both composer and flutist, in July. “We kicked around a few potential candidates of pieces that could be performed. We finally decided that ‘Nautica’ would be a good choice,” she says, noting that its brevity and need for only one performer, and the fact that it would be a world premiere, were all factors in the decision.

As for being part of a concert that deliberately features hometown composers, Chamberlain says: “These ‘local’ programs are a great way for the community to recognize that art doesn’t happen in some distant land, but it’s right here and by people you may pass on the street. It’s also a great way for artists in a local area to get a chance to hear what is being created by people in the same locale, but in many different ways. Just because we all live in the same town doesn’t mean we are always going to make the same creative choices. There are a number of other influences in an artist’s life than where that artist lives. It should make for a diverse concert.”