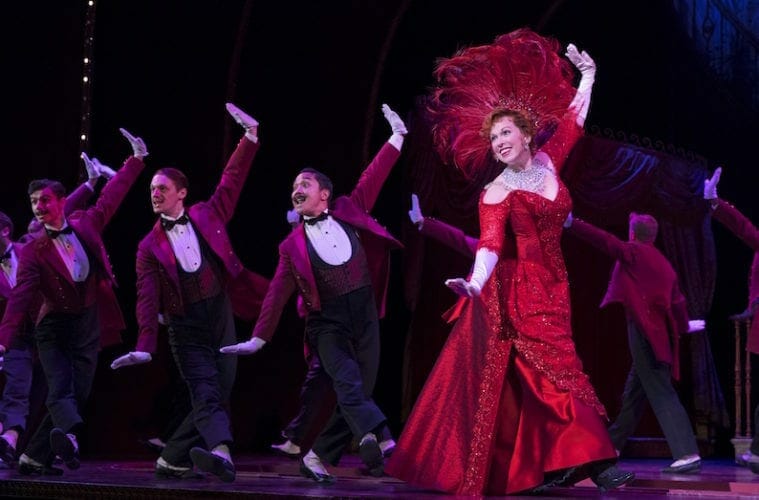 Carolee Carmello, as matchmaker Dolly Gallagher Levi, leads the Harmonia Gardens waitstaff in song and dance in the big Act 2 number, "Hello, Dolly!" The musical is at the Fox Theatre through Sunday. (All photos by Julieta Cervantes)

Review: Broadway’s Carolee Carmello is right where she belongs in “Dolly!” tour 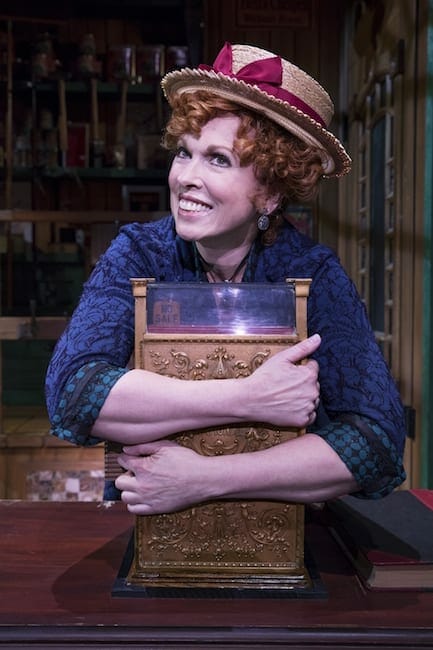 She does so with impeccable vocals, a wink and a nudge, sleight-of-hand and flaming red hair set apart by Santo Loquasto’s candy-colored costumes (especially the bright turquoise she wears in Act 1’s “Dancing” and “Before the Parade Passes By”). The sad news: You have only a few days to watch her work. The national tour she headlines with verve closes Sunday at the Fox Theatre. The tour itself shutters March 22.

This confectionary musical, which has more gravitas than you might remember — it touches on life, loss and dreams deferred — has been part of the American canon since Carol Channing rode onstage as Dolly Gallagher Levi at the St. James Theatre in 1964. It’s seen four Broadway revivals and any number of national tours. Pearl Bailey, Phyllis Diller, Betty Grable, Mary Martin, Ethel Merman (for whom the show was originally written), Ginger Rogers and Imelda Staunton have all worn Dolly’s sumptuous 1890s’ hats, frocks and elbow-length gloves.

The original received 11 Tony awards, including best musical and best actress for Channing, and ran almost six years. This most recent revival earned four — including best musical revival and, for Midler, best musical actress. Its source material is the 1954 Thornton Wilder comedy The Matchmaker. Its music and lyrics come from the great Jerry Herman, whose death this past December makes this viewing all the more poignant.

But enough history. How does this Dolly measure up?

Quite nicely, mostly. It’s staged in a highly stylized fashion and keeps an eye on the audience, which might not be to everyone’s taste. The 33-member company performs Herman’s storied score with precise diction and gorgeous harmonies, sharing with us lyrics that often are lost in the propulsive push of the music. The ensemble does heroic work throughout, spotlighted as it is in some 10 numbers. The men have an even bigger challenge than the women. They do every song and dance that the ladies do plus the man-centric “It Takes a Woman” and “Waiters’ Gallop.”

Choreographer Warren Carlyle’s dances are not for amateurs. Nearly every number moves — make that MOVES — with intricate steps and and an uptempo pacing that would tax even the most aerobically gifted.

The disappointments are few. The staging of “Before the Parade Passes By” and the title tune suffer from a lack of the usual runway circling through the orchestra. Both are vocally joyous but feel a bit hemmed in, which is difficult on the expansive Fox stage. The throwaway number “Penny in My Pocket” remains. It was added to the revival when David Hyde Pierce played Horace Vandergelder, removed when both he and Midler left the New York cast and put back in when they returned. It ostensibly explains how Vandergelder made his half-million dollars, but it’s boring and three minutes better spent elsewhere (Fox shows run late enough as it is with their extended intermissions). It also would be nice to see a more diverse cast.

Dolly gets her Horace. Carolee Carmello and John Bolton lead the “Hello, Dolly!” company in the finale.

The other principals — John Bolton as Vandergelder, Daniel Beeman as Cornelius, Sean Burns as Barnaby — are all fine. Bolton has an especially rich baritone and does more with a necessary but relatively thankless role than many. Chelsea Cree Groen’s Minnie Fay is often made to walk using mincing tiptoe steps. It’s an annoying choice. Jenny Hickman, an understudy, stepped in as Irene Molloy on opening night.

Ultimately, the musical lives and dies with its Dolly. It’s clear from the opening number, “I Put My Hand In,” that Carmello knows exactly when and how to twist a little, stir a little, shape a little, mold a little . . . and use her fist. Her firm and sure touch never wavers. How terrific is it that the audience sees fit to give her the entrance applause a star — not a word used lightly — deserves.

Carmello has done 14 Broadway shows at last count, most notably as Lucille Frank in Alfred Uhry-Robert Jason Brown’s Parade in 1999 (Tony Award nomination) and evangelist Aimee Semple McPherson in 2013 (also a Tony nomination). You may remember her as Mae Tuck in Tuck Everlasting, which began life at the Alliance Theatre in 2015 but sputtered shortly after reaching Broadway.

With Dolly Levi, she has a lot more fun. And so do we.