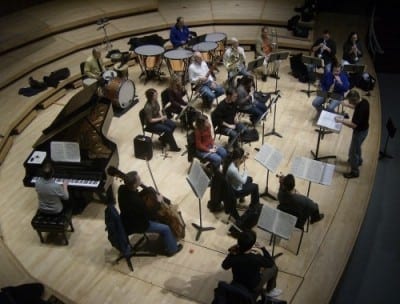 Review: Music and molecules converge in Emory’s “Creation of the World”

The musicians rehearse for Sunday's performance. (Photo by Mark Gresham)

In the beginning was the Sound. The big bang. From that event more than 13 billion years ago, science tells us, the universe rapidly expanded and cooled enough that its white noise of energy could change into subatomic particles. Those particles later joined to form atoms, and those atoms combined to form molecules, eventually leading to the emergence of life. Biochemists are researching what harmonious chemical conditions might have led to the emergence of life.

Science isn’t the only field to speculate about the origins of the universe and of life. Explorations of the relationship of music to the fundamental nature of the cosmos go far back in history, from the teachings of Pythagoras and the ancient Chinese “yellow bell,” which served as a foundation of not just music but of all physical measurements, to the medieval European concept of musica universalis, the “music of the spheres.” The poet John Dryden wrote in 1687:

From harmony, from heavenly harmony,

When nature underneath a heap

And could not heave her head,

The tuneful voice was heard from high,

Not entirely unlike the aftermath of the big bang, from an artistic perspective.

These origins of life and music were thematically tackled Sunday afternoon in a concert at Emory University’s Schwartz Center, presented jointly by the Emory Chamber Music Society of Atlanta and the university’s Center for Chemical Evolution. A dialogue between David Lynn, Emory professor of biomolecular chemistry, and Dwight Andrews, associate professor of music theory and African-American music, formed the first half of the program.

Each acknowledged to me afterward that the subject is much too broad and complex to have covered adequately in the short available time. But from their dialogue, I derived the non-technical gist of the analogy they were trying draw.

First, a community of chemicals, whether in a pond of primordial slime or a laboratory flask, requires sufficient diversity in its makeup for its elemental molecules to combine de novo into more complex, lifelike forms, and enough stability to sustain them. Some lifelike biochemical forms survive; some don’t. But research has led to the realization that in the right chemical environment, complex biochemical structures seem remarkably, almost magically, to self-assemble.

Second, a community of humans requires sufficient cultural context for elemental sounds to evolve de novo into a musical idiom, and enough cultural stability to sustain it over time. Cultural differences produce different idioms from similar musical materials. Cultural changes, including exposure to a diversity of other cultures, can transform a complex musical syntax and evolve it in remarkable ways.

After intermission, the musical part of the program began with an Adagio and Fugue by J.S. Bach, from his Sonata in C Major for solo violin, performed by Domenec Salerni of the Vega String Quartet, Emory’s professional string quartet in residence. Programmed as an allegory of evolution, the Adagio opens with a patient layering of notes leading up to the complex fugue with a subject based on the chorale “Komm, heiliger Geist, Herre Gott.” Salerni brought a noble approach to the piece, but he appeared at the end to have expected more from himself.

The entire Vega Quartet followed with the dense and emotionally heated String Quartet No. 3 by Béla Bartók, the most tightly constructed of Bartók’s six quartets. The Vegas played it with vigorous enthusiasm.

But the best illustration of the opening dialogue’s analogy was the concluding piece, Darius Milhaud’s “The Creation of the World.” Completed in 1923, it was written for a 20-minute ballet based on African folk creation mythology, at a time when things African and Afro-American were all the rage in Paris. It was the 30-year-old Milhaud’s first attempt to incorporate American jazz into his modern French aesthetic. Eighteen professional musicians, gathered by the Emory Chamber Music Society for the performance, were led by Emory’s orchestral director, Richard Prior. Though not a perfect performance, Milhaud’s energetic score, with its jazzy rhythms and bluesy colors, closed the concert with a wallop of fun.