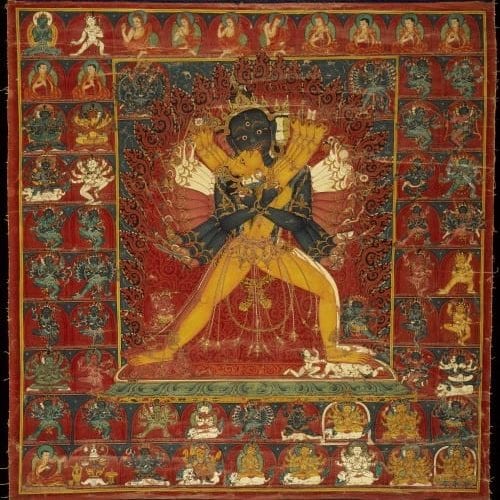 Review: Art as mysticism and meditation in “Mandala: Sacred Circle in Tibetan Buddhism”

After some two decades of visits from the Dalai Lama and exhibitions of Tibetan art in Atlanta, most of us are at least acquainted with the painted mandala as a representation of a complex, symmetrical building with a single enlightened being at its center. But the Michael C. Carlos Museum of Emory University’s “Mandala: Sacred Circle in Tibetan Buddhism” makes it clear that the mandala painting isn’t a diagram like a blueprint; it’s an aerial perspective like a topographical map.

According to Emory religion professor Sara McClintock, who has worked with the Carlos on the presentations accompanying its remarkable transmutation of an exhibition originally organized by New York’s Rubin Museum of Art, the mandala should actually be considered a symbolic representation (in the form of a palace) of the sphere of energy that surrounds an enlightened being. One might compare it to the force fields of radiant glory that surround the saints in certain Eastern Orthodox icons, or envision it, as one scholar has put it, as a bird’s-eye view of the soul.

The show begins with a stunning object that has never been on public view before, simply because it wasn’t completed until two months ago. The monks of Gyuto Monastery in Dharamsala, India, spent several years carving an immense wooden sculpture of the Guhyasamaja mandala, representing the palace and its gates in fully dimensional splendor. Juxtaposed with flat representations of the same image in the type of mandala paintings we are familiar with, this introduction to the exhibition instantly accomplishes the perspective-flipping described in the first paragraph above.

There are other types of mandalas designed for specific purposes. The familiar combination of squares and circles that we have seen in previous exhibitions are juxtaposed with other examples of sacred geometry, most notably the triangle that serves as a trap for the ego, which has to be gotten out of the way if enlightenment is to be achieved. Furthermore, mandalas appear in more forms than paintings of the type attached to brocaded thangkas; there are examples here of wooden plates on which other objects (a tripod, for example) would be placed during rituals.

If this suggests that a good deal of wall text is needed for visitors to understand the complex visual pleasures on display, the same is true for would-be initiates. One mandala is displayed with a Tibetan drawing of the same image with the parts labeled and some of the recitations associated with the mandala written alongside.

For those who might have failed to imagine how the mandala is not only to be viewed three-dimensionally but explored through the practice of visualization, a remarkable computer animation of the Kalachakra mandala takes us on just such a tour of the walls and gates of the palace, in one of the only 21st-century American interventions in an exhibition otherwise consisting exclusively of traditional objects.

Kalachakra deity in an embrace with Vishvamata.

The Kalachakra mandala itself is hung on the adjacent wall, and as the wall text observes, the meditational practice associated with this mandala “develops the concept of structural correlations among all things, in particular the connection between the universe, the mandala and the human body.”

With eyes thus freshly opened, viewers will then be able to consider the vertiginous depth and breadth of Buddhist cosmology, symbolized in metal offering trays through which the devotee is expected to present an analogue of the universe one rice grain at a time. In addition to representations of the universe in such objects, the Buddhist world system is illustrated in instructional paintings of sacred Mount Meru at the world’s center and the 25 heavens that rise above it.

Some of these objects are being presented publicly for the first time after centuries in which they were viewed only in the context of initiation. They are not art objects, or objects for worship; they are precise instruments for the transmission of wisdom, to use the technical term. They have an immediate emotional resonance even without any initiatory practice, but they weren’t created for aesthetic enjoyment, or even to be contemplated apart from the rituals through which they are introduced to the initiate. As with the simpler case of devotional objects, when we encounter them as uninstructed viewers, we understand only the smallest fraction of their contents or their purposes.

This doesn’t change the fact that simply to view these objects is to alter your perspective, in ways that may surprise you. In its own subtle, sometimes dizzying way, this show itself is transformational.

The Carlos exhibition, which will run through April 15, is the centerpiece of a campus-wide immersion in mandalas, which should provide more diverse ways of contemplating their meaning and function than have ever before been offered in Atlanta, if not in the whole United States. A sampling: