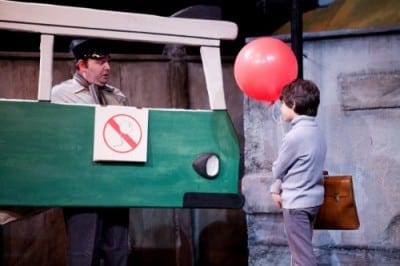 The classic 1956 Albert Lamorisse film “The Red Balloon” seems like a terrible candidate for transposition to the stage. There’s almost no dialogue, and the three main stars — a little boy, a red balloon and the city of Paris — are all notoriously bad at taking direction in the theater.

But Théâtre du Rêve’s production, at 7 Stages through February 12, is a remounting of a successful staging of “The Red Balloon” by the Atlanta-based company last year. The first run sold out, and this second is back by audience demand. It’s easy to see why. It’s a family-oriented production that puts an “impossible to tell” story on stage in ways that are utterly charming and inventive.

There’s actually not much to the “story.” A little boy named Pascal (played in the movie by Lamorisse’s son Pascal) finds a magical red balloon that follows him around, protects him, plays with him and then is popped. The evocative streets of Paris are the setting, and they’re filled with colorful helpers and antagonists, bit players and tormentors. In Théâtre du Rêve’s production, the simple story is told in English and some simple French, but the narrative and dialogue are so straightforward that it could be told in Aramaic or Mandarin and we’d never feel lost.

The little backroom theater at 7 Stages becomes a tiny corner of Paris, with views of hills beyond. The troupe does an especially good job of showing us vignettes of characters engaged in daily Parisian life. As in the film, the setting turns into more than just a setting, and the background characters become more than mere background — a street sweeper finds a rubber ball and bounces it into his pocket, a little girl with a hoop reads a book as she hulas. The actors double up to create this busy and crowded Paris of vendors, musicians, schoolchildren, street sweepers, businessmen, matrons, teachers, bus drivers and passers-by.

The show also adds some inventive sequences using puppetry and animation. When Pascal falls asleep during arithmetic class, we witness his surreal dream as fractions dance around him, and a trip to the flea market brings to life its piles of junk.

A bus plays a small but significant part in the movie, and the show’s designer and adaptor, Park Cofeld, brings it on in the cutest way: we see the bus approaching hill by hill in the background as a puppeteer uses a series of larger and larger cut-outs of two-dimensional buses. Finally, a bus driver enters stage left holding an enormous cutout, and the characters board it. It’s a bit of homespun magic, perfectly indicative of the overarching spirit of this show.

There is, however, something more contemplative and isolated at the heart of the film, which hard-core fans might miss in the stage production. Théâtre du Rêve’s Paris is a happier place than Lamorisse’s. In the movie, adults are unimaginative and unfriendly, the tormenting gang is truly terrifying, and the streets are old, gray, dreary, wet and depressingly empty or crowded with people to whom Pascal is often just a momentary nuisance, if that. Théâtre du Rêve’s Paris is fun and full of song, and it’s a happier story all around.

Film purists might bristle, but they’d be wise to remember the crucial lesson of both movie and play: keep your heart open. “The Red Balloon” is an inventive, lively, engaging and heartfelt production. One hopes this second staging won’t be the last.