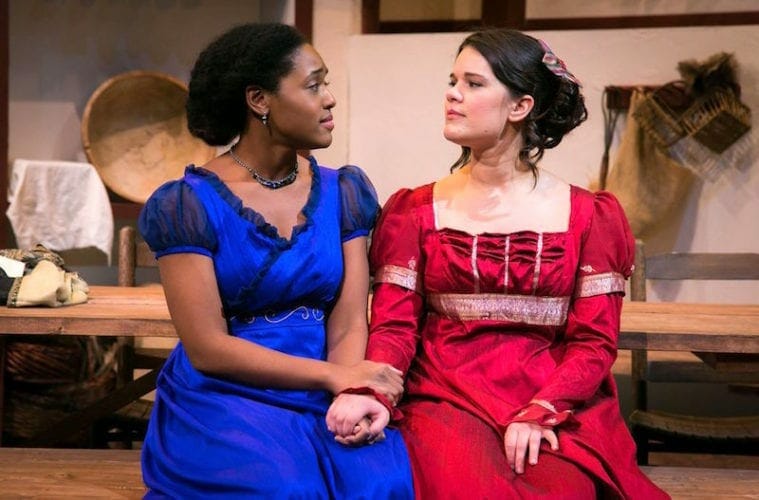 "The Wickhams: Christmas at Pemberley" is an upstairs/downstairs story from the Jane Austen era. Jasmine Thomas (left) returns as Elizabeth Darcy, the lady of the house. Erika Miranda is a servant named Lydia, who's stuck in a broken marriage.

Review: Magic, wit of its Theatrical Outfit forbear goes missing in “The Wickhams”

Many theaters spend the holiday season rotating through A Christmas Carol, It’s a Wonderful Life and such, but for the past three years, Theatrical Outfit has immersed itself in Jane Austen’s world. It first produced Miss Bennet: Christmas at Pemberley, an imagining of the fates of the sisters in Pride and Prejudice, in 2017. In that Lauren Gunderson–Margot Melcon script, Mary is the only unmarried Bennet sister, but a mysterious visitor wants to change that. Love does not run a smooth course for George and Lydia Wickham, played by Daniel Parvis and Erika Miranda. (All photos by Casey Gardner)

In the sequel, The Wickhams: Christmas at Pemberley, Gunderson and Melcon craft a story about what happens when love goes sour. Carolyn Cook, who directed the Outfit’s first two Miss Bennets, returns with this production (onstage through December 29). The Wickhams has plenty of potential, but it lacks the witty punchlines and charm of its predecessor.

This staging has an almost entirely new cast, with only Jasmine Thomas returning as Elizabeth Darcy and Justin Walker reprising his role as Fitzwilliam Darcy. Miss Bennet benefited from a seasoned cast, but most of the performers here are green and still finding their footing. The British accents are all over the place, and the character development has a bit further to go.

It’s worth noting that this is an upstairs/downstairs story as much as it is a self-love story. Miss Bennet takes place in the Darcy living room; The Wickhams is set in the servants’ quarters. The premise is promising. The central conflict features Lydia (Erika Miranda), who’s married to George Wickham (Daniel Parvis), a former estate employee whose gambling and philandering are sullying her name quicker than his lack of noble birth. When the new maid, Cassie (Lauren Boyd), finds a scandalous letter in George’s coat pocket, the whole house goes into a tailspin on the eve of Boxing Day.

The Wickhams does have some shiny moments. The relationship between the cook, Mrs. Reynolds (Deadra Moore), and Cassie reminds us of Downton Abbey‘s Mrs. Patmore and Daisy. Moore is a standout, and the two actors’ generational differences provide plenty of laughs. Miranda finds a nice balance between flightiness and self-determination in her interpretation of Lydia. She’s intense and funny and convincingly conveys the conflict of a young woman in a broken marriage.

Just as in Austen’s novels, Decatur-born and San Francisco-based Gunderson and colleague Melcon don’t shy away from questioning what benefit marriage offers women. In the 19th century, marriage was an economic necessity, but being a good wife often meant sacrificing independence and self-expression. Today, having it all means being able to pursue one’s passions in the context of a relationship. In Austen’s day, it was about emotional agency and the right to keep one’s own thoughts.

These conversations are highlighted through interactions between Cassie and footman Brian (Shaun MacLean), who dotes on her. She, however, is more focused on advancing her education than falling in love. She refuses to accept Brian’s advances until he proves that he’ll invest in her dreams.

What makes Austen a remarkable novelist is also what distinguishes Gunderson and Melcon today. Their dedication to offering young women alternative ways of being on the page and onstage is always necessary. Hopefully in time, Theatrical Outfit’s production of The Wickhams will find its zeal for the message.