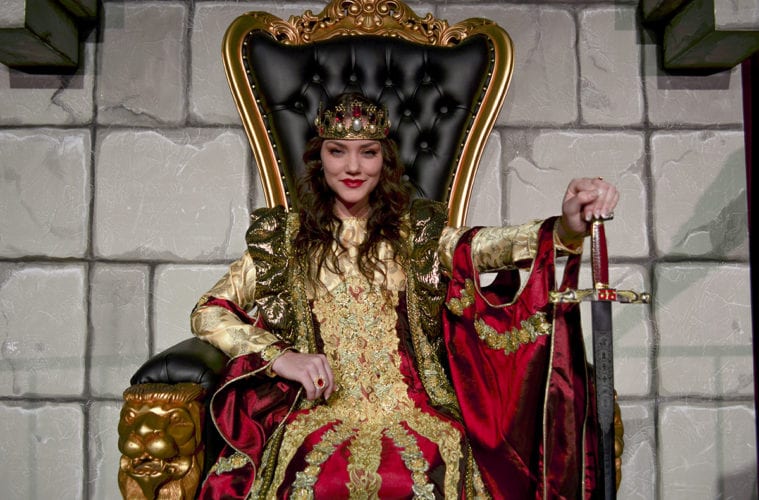 Q&A: The queen of Medieval Times talks turning history into a chivalrous revolution

When 21-year-old musical theater actress Ashlyn Süpper got a job in the Medieval Times gift shop, she had no idea that one day she’d have a coveted role in the dinner-theater production.

Set in medieval Spain, Her Majesty Doña Maria Isabella has taken over as ruler of the kingdom after her father’s death. She is hosting a tournament to find the supreme knight in the land, and drama develops as a dishonorable knight challenges her authority. The tale of chivalry, rivalry and revelry plays out while the audience feasts upon chicken with their bare hands and waves ribbons to cheer on their knight — determined by their seating arrangement.

Fans flock in the thousands every year to the incongruous stone castle attached to Sugarloaf Mills Mall. Past the Starbucks line and Forever 21 strip lighting, you can hear trumpets and vague British accents as the velvet-clad cast welcome their guests to the tournament. There is jousting, sword fighting, falconry and dressage to wow the crowds, but the thread holding it all together is the storytelling. This family-friendly Game of Thrones — where displays of valiance will warm your heart — has been running for 35 years. But only recently has a queen been allowed to occupy the throne.

ARTS ATL sat down with Süpper to discuss what it takes to be promoted from princess to queen, her excitement about being considered a strong female role model and why 11th-century chivalry shouldn’t be an antiquated idea. ARTS ATL: What was your first experience of Medieval Times?

Ashlyn Süpper: The first time that I came to the castle was for a birthday party when I was in elementary school. My whole family was excited, and I remember that we sat in the red and yellow section. I’m almost positive that the knight that I saw in the tournament is one of my knights now. So, I was cheering him on back then from the stands, and now I get to tell him what to do in the show. It’s come full circle.

ARTS ATL: What was the audition process like to be the queen?

Süpper: There wasn’t one. There were four princesses already cast as the king’s daughter, so we were all happily promoted. The queen is the main character, so we speak in a more authoritative voice, annunciate our words and remain poised and powerful. We did need to learn some new skills, however, like how to do a traditional knighting ceremony and how to ride a horse. I was very excited about learning to ride a horse. We worked one-on-one with a horse trainer at the castle for three months to get comfortable around the horses. I have only ridden the Legion, one of our Andalusian horses as the queen, but just in case anything were to happen, we were trained to be able to ride any of the 12 horses in the stables. ARTS ATL: Did you have any reservations about performing with animals?

Süpper: I was a little intimidated at first, as I’d seen the knights be so skillful with the horses while I was in the princess role. Each knight had already established a bond with their horse; they all ride so well and command so much attention. So, the first time the audience sees a queen on a horse, she must command the same respect from the animal, if not more. I wanted to do the role justice, and I took that part of the training very seriously. Working with animals is one of my favorite perks of the role. The staff that looks after the horses and keeps them in top shape are so passionate and knowledgeable about their job that their enthusiasm makes me even more enthusiastic.

ARTS ATL: What made you want to be a part of the story?

Süpper: Working in the gift shop and doing some marketing for Medieval Times showed me how big of an impact the show has on the guests. The interaction that I have with the guests is my favorite part of the show, and I love inviting them to the tournament every night.

ARTS ATL: How have Medieval Times patrons reacted to a female as the main character?

Süpper: Leigh Cordner, the writer/director of the show, came up with the queen idea after audience feedback told him that they wanted a more significant role for the women in the show. The audience looks up to you in a different way when you’re the queen as opposed to a princess. Interacting with the children who visit feels different in this role. I have to be more extroverted and take my time with them, as the big dress and big crown can be intimidating. It is so rewarding to hear from parents that they’re excited for their children to have a strong female role model. When I get drawings, cards and letters from kids, it definitely tugs on the heartstrings. If an audience member addresses me as “princess,” the rest of the cast is quick to point out that I am, in fact, the queen.

ARTS ATL: Who are the famous queens that have inspired your interpretation of a monarch?

Süpper: Adelaide Kane’s multifaceted portrayal of Mary Queen of Scots in the Netflix show Reign is my primary source of inspiration. You get to see different sides to her character, much like my character Her Majesty Doña Maria Isabella. The audience gets to see the queen relaxed and cheering on her knights as the games are happening. But we also see her assert her dominance and power and remind everyone that we have to treat the tournament with respect and uphold the code that her father put in place.

ARTS ATL: How has the role spilled over into your 21st-century life?

Süpper: I suppose I expect a higher level of chivalry, honor and respect than your average woman.