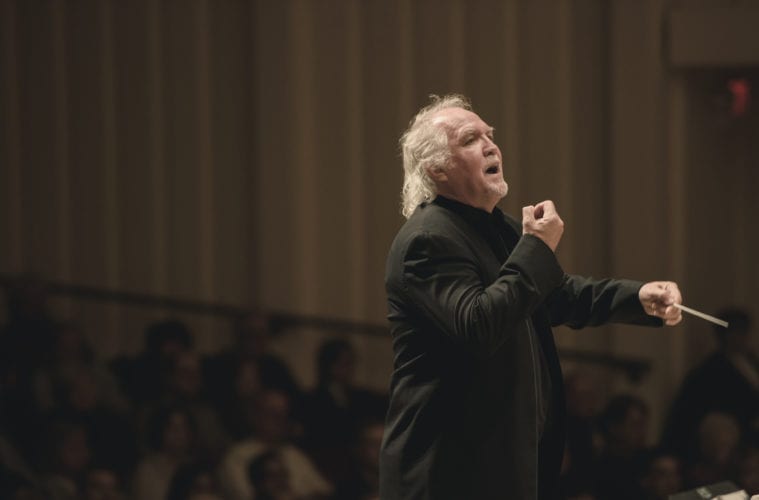 Last night, Donald Runnicles led the ASO in a program of French compositions. The concert repeats on Saturday. (Photo by Simon Pauly)

The ASO educates and entertains with a concert of French music

The concert, heard Thursday night, featured two Claude Debussy works: a curation of four Préludes, orchestrated confidently by the British composer and musicologist Colin Matthews in 2007, and Debussy’s masterpiece La mer or The Sea (1905), three sketches of the ocean like a series of Turner or Monet paintings. After a polite — but tepid — response to Milhaud, the rest of the program was greeted enthusiastically, in particular La mer. The program repeats this Saturday at 8 p.m.

The century-old Milhaud, a new work for the ASO, can be puzzling for audiences to absorb. As principal guest conductor Donald Runnicles remarked from the stage, images of Brazilian life are counterbalanced with clashes between opposing tonalities. Runnicles played up the work’s visual spectacle, pointing out to the audience instruments — very often winds — that were contrary to the prevailing tonality, the organization of the musical composition around a central note. The work’s tempo and spirit were vigorous and dance-like at times but sensuous at others.

The challenge of Milhaud’s work is its unwieldy length of 18 minutes. Structurally, its rondo theme plods through all 12 keys, which come in three waves of rising minor thirds. This tonal structure, however, should be understood as mocking the pretensions of preludes that systematically change key, such as Beethoven’s little-known Two Preludes, Op. 39. The ASO performs a program of French music again on Saturday. (Photo by Raftermen)

Canteloube’s Chants d’Auvergne is an underappreciated, sun-swept confection that features modal melodies, rustic dances, vivid and slightly dissonant orchestrations and shepherd-like melodies played by wind instruments such as the oboe. The British lyric soprano Kim-Lillian Strebel is a repeated collaborator with Runnicles who soloed in Beethoven’s Missa Solemnis with the ASO in 2016. Strebel’s voice has the necessary weight and legato for late romantic repertoire such as Mahler and Berg, and she performed the Canteloube with a mixture of rich tone, passion and good humor.

The first song, “L’Antouèno,” featured orchestration almost as vivid as Respighi’s tone poems. The second, “Pastourelle,” with a standout oboe solo by Elizabeth Koch Tiscione, was subdued, lonely and mournful, with the protagonist lamenting that she cannot cross the stream — a recurrent complaint in other songs. “Trois Bourrées: L’aio de rotso” was sprightly and humorous, with the joke that water is poisonous, so one should prefer wine. Strebel ended the song with upturned face and eyes, suggesting continued merriment afterward. The standout song was “Baïlèro,” which mixes pastoralism with longing and nostalgia. The voice emerges seamlessly from the orchestra, often delayed, wrapping the listener in the song’s embrace.

Commanding the entire hall with “Baïlèro,” Strebel offered a subdued, lyrical expression, although one might argue she did not take as many chances with soft dynamics and gestures as Dame Kiri Te Kanawa did in 1989 performance with the Royal Philharmonic Orchestra. The last two songs, “Passo le prat” and “Malurous qu’o uno fenno,” were fun and assertive, the latter poking fun at the paradoxes of the world.

Debussy’s Préludes are a less systematically organized collection written for piano than Bach’s or Chopin’s sets. For this reason, performers starting with Debussy have often pulled collections of three to four pieces that reflect specific themes. The ASO’s selection began with “Minstrels” and ended with “Général Lavine–eccentric,” both comic dances influenced by ragtime.

Matthews’ orchestrations are daring, with the percussive, wet aspects of the piano translated cleverly into sustained strings or brass with interjections of harp, metallophones and xylophones, string pizzicatos and limited use of timpani. The second and third Debussy preludes, “La Puerta del Vino” and “Les sons et les parfums tournent dans l’air du soir,” were switched from their printed order in the program. These had an incredible depth of sound, with rich basses and sensitively balanced upper strings that quieted the audience and drew them in. Perhaps Matthews’ orchestrations will enter the canon, just as Ravel’s “Le Tombeau de Couperin” is known primarily as an orchestral arrangement, although it was originally for piano solo. The three symphonic sketches, La mer, were the evening’s highlight. Runnicles mentioned that the ASO could perform La mer each week if given the chance, and the musicians’ love of the work was later evident. In “De l’aube à midi sur la mer,” or directly translated as “From Dawn until Noon on the Sea,” sensitive tremolos in the strings allowed for a fascinating variety of depicted ebbs and flows in water. La mer does not rely on cliched depictions of water such as arpeggios but a wider palette of techniques such as triplet rhythms and subtle articulations. Who would guess that Debussy composed this work away from the ocean?

In “Jeux de vagues” (“Play of the Waves”) and “Dialogue du vent et de la mer” (“Dialogue of the Wind and the Sea”), a sensitive cantabile was balanced by exemplary clarity so that one could hear a detailed expressive gesture in every instrumental part. From my view in the loge, the action unfolded as a finely grained choreography. Runnicles was in his element with a variety of subtle gestures ranging from the softest pianissimo to the largest fortissimo. In the future, La mer deserves a recording by the ASO.