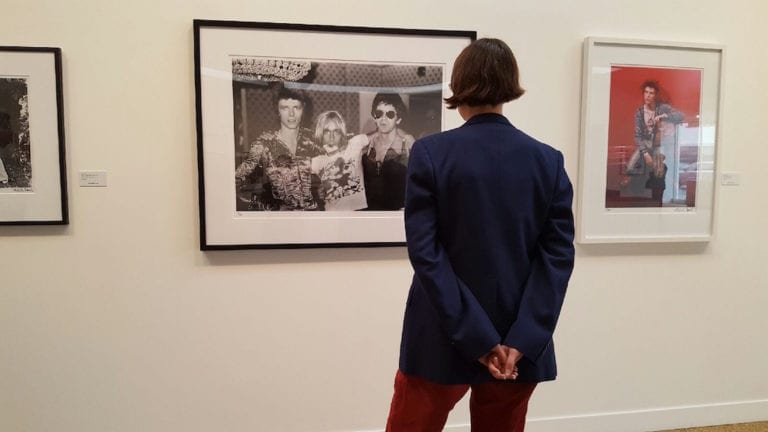 Megan Volpert is a writer and editor whose work explores such pop culture juggernauts as Tom Petty, Bruce Springsteen, RuPaul and more. (Photo by Mindy Friedman)

Megan Volpert is a bit hard to define. A simple definition would include Atlanta-based high school teacher, writer, editor and poet. Unfortunately, that would almost completely fail to capture the unique ways in which she blends genres, subjects and forms to produce work that takes aim at the zeitgeist surrounding some of the biggest names in pop culture — Andy Warhol, Tom Petty and RuPaul, just to name a few.

Other ways Volpert chooses to describe herself and her work?

“Defender of the highbrow/lowbrow mash-up,” with “general tones of leftist, punk rock disdain.”

“Overtly intellectual and female — at the same time, folks!”

“Public high school English teacher for over a decade, beloved by many students who are saving our future, loathed by many patriarchal ignoramuses clinging desperately to their privileged past.”

Volpert’s new book, Boss Broad, is perhaps a perfectly distilled example of the ways she busts open the boundaries of content and form to create something poetic, punk rock and profound. It’s a book she describes as “a three-way dialogue — between the icons I believe in and the iconoclast I’ve become.”

Boss Broad contains poems and essays in which Volpert “audaciously rewrites [famous Bruce Springsteen songs] to answer the Boss back using his own rhyme and meter. In these pages, Volpert wears Springsteen’s own lyrical swagger so that Rosalita becomes a drag queen, Wendy captains her own ship and Bobby Jean finally comes out of the closet. The essays examine injections of spirituality in progressive politics, with topics including Stephen Colbert, Patti Smith, the author’s career as a punk high school English teacher, what she learned surviving hurricanes in Louisiana and meditations on what it means to be a cool liberal. As usual, Volpert trespasses on hallowed ground, doing battle with her white lady demons in the name of rock ‘n’ roll.”

Volpert spoke with ARTS ATL in advance of her book launch event on June 1 at New Hope United Methodist Church on Moreland Avenue and the book’s release on June 11 — about Bruce Springsteen, feminist punk ideals and f-bombs as a love language.

ARTS ATL: You’re an English teacher, a journalist, a writer and an editor. Is there a common thread that runs through all of this work for you? How would you describe that thread?

Megan Volpert: In the words of Joan Jett, “I wanna be where the boys are,” pop cultural in content, rebelliousness in form. Overall argumentativeness. I like working behind enemy lines to knock down powerful, sinister people. In their place, I put queer feminism with splashy, campy rock ‘n’ roll attitude. As a teacher, I mentor girls who hopefully go on to sprout spines of steel. As an editor, journalist and writer, I try to make space for and deliver attention to underappreciated perspectives — those pushed aside because of their gender, sexuality, race, cash flow, etc.

ARTS ATL: Regardless of form, what are the stories you’re most passionate about telling, and why?

Volpert: Beyond my [previous] answer, I guess I’d just admit that I like talking about myself. The story I’m most passionate about telling is my own story. To quote Shane Koyczan, “This is my voice / there are many like it / but this one is mine.”

ARTS ATL: You describe yourself as a theory junkie who cannot resist rock ‘n’ roll. Is that how you ended up editing Tom Petty and Philosophy? Can you speak a bit about this collection and how it came to be?

Volpert: There’s a tattoo over my heart (I’m being literal here) that says, “What would Tom Petty do?”

A lot of us who don’t show up at religious services on Saturdays or Sundays have our own version at concerts on Friday nights instead. Many people are familiar with the idea that superfans may find ways to conflate, for example, Elvis with Jesus. Music lovers can be a worshipful bunch. For me, Tom Petty is supreme. So I kept banging on the door at Open Court until the publisher finally agreed to let me do Tom Petty and Philosophy. I first pitched it to them in 2012. Five years later, they relented.

Certainly I’ve got enough Petty-headed insights to have written an entire thing on my own (and I ultimately did that, too, with a book-length treatment of his song “Straight into Darkness,” as a kind of Sisyphus myth), but working solo is not very sporting for a memorial to such a great thinker. I wanted a lot of fans to share their wisdom about his wisdom, so the anthology route was a good one.

ARTS ATL: Let’s talk about your new book, Boss Broad. It’s an amalgam of genres — poetry, essays, reimaginings of Bruce Springsteen lyrics. How did this collection come together?

Volpert: I often give myself constraints when writing, regardless of genre. English-to-English translations are having a bit of a resurgence, and I thought it would be a good time to do something with rock music — like in a “Weird Al” Yankovic way but more strict in form and also more political.

At the same time, Springsteen had a lot going on — a major biography of him had just come out, plus announcement of his own forthcoming memoir and Broadway show — so I knew there would be timely material to consider, in addition to the very wide and deep resources generated by his long career. And then personally, I’ve always had mixed feelings about the Boss. Some of his work has been a salve to me, but some of it has also seemed to ignore lives like mine. I had enough ambivalence about him that I felt sure I could just go in the varying ways my heart led me and the results would be pretty interesting.

ARTS ATL: What was it you sought out to explore with the collection?

Volpert: I grew up as trash and never really expected to live past 30. But here I am now, staring down the barrel of middle age and wondering how to devote myself to something worthwhile. I’m trying to be a useful curmudgeon, trying to adapt my sense of heroism from the comparatively naïve but still highly valuable views I held as a teenager.

I used to think that 16-year-old me would probably think that middle-aged me is a total sellout and that 16-year-old me had a lot to learn about life. But I’m in my classroom with 16-year-olds five days a week, and they generally assure me that I’m onto something that helps them. Boss Broad is a three-way dialogue — between the icons I believe in and the iconoclast I’ve become, with my students serving as our jury.

Volpert: He’s wordy. His lyrical style shifted from time to time. He has many popular songs. His catalog was deep enough to accommodate constraints and still leave a lot of good songs from which to pick. He gets personal and political (what Robert Hilburn would call an “active band,” full of meaning, rather than a passive one), and I didn’t want to choose a catalog that was just fluffy pop hits. I knew it would be a challenge, and it was. I never considered any other musician for this project.

You may ask why not Tom Petty, given my reverence for him — but the reverence is the answer to that question. I’m willing to make some jabs at Springsteen’s pedestal.

ARTS ATL: From what I understand, you’ve got two more projects in the works — one about RuPaul’s Drag Race, and the other, Closet Cases, about the role clothing and fashion play in the construction of queer identity and culture. Tell us a bit about these projects.

Volpert: All part of the big “gay agenda”! They’re both queer style projects. Unlike a lot of pop culture writers who specialize in reviewing a certain media format — books, television, music — I am also extremely interested in the philosophical lives of everyday objects: motorcycles, colognes, forks, sneakers, ink pens, whatever.

I’ve spent about 10 years working on book projects that center around music because music is highly interesting and accessible to many people. Clothing is too. Everybody gets dressed in the morning. People — especially queer people — do a lot of signaling via their daily wardrobe choices. I think philosophy should pay attention to everyday concerns and that books should validate the thinky tendencies of everyday people. Fashion is usually considered shallow. It’s not. It’s a worthy subject to which everyone can intuitively relate with just a little bit of guidance.

The Drag Race and Philosophy book sort of approaches the same problem — RuPaul Charles and his media empire are viewed as either monstrous or vapid. But fans of the Ru-niverse are actually quite thoughtful, and they deserve much wider space for consideration. The future is drag; people need to know. 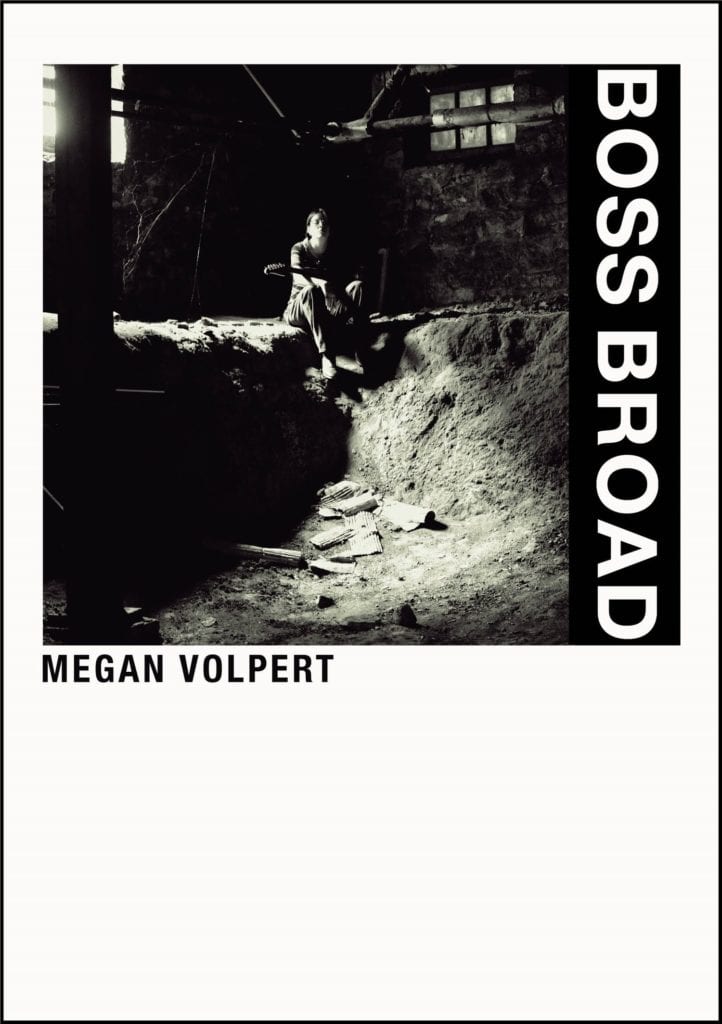 ARTS ATL: Aside from your other work, you’ve also taught high school English for over 10 years. Does teaching high school students inform your writing in any way?

Volpert: Oh yeah, they absolutely keep me honest. Philosophy, or theory, is usually considered the stuffiest of academic humanities domains. The lingo of it too often gets in the way. I always ask myself whether my 16-year-old students will understand and appreciate the arguments I’m making. What and how can I write that will aid these sophomores in the pursuit of a diligently thinky existence?

ARTS ATL: And how does working with your students influence your perspective on the pop culture topics you explore in your other work?

Volpert: I want to show them the history of queer, punk, feminist ideals. Most of my pop interests are rooted somewhere in the mid-to-late ’70s. There was a lot of sex and drugs at the forefront of culture during that time. I don’t shy away from it, but I’m also careful not to sensationalize or valorize the clichéd aspects of a rock ‘n’ roll lifestyle, because I know that young adults are reading my books right alongside their parents.

On a good day, I’m a role model. Still cursing like a sailor, though. I’m from Chicago; f-bombs are our love language.

ARTS ATL: Your work takes on many forms, but you still have a consistent and distinct point of view throughout. What advice would you give to students or beginning writers looking to develop that within themselves?

Volpert: “Consistent and distinct” — why, thank you! Those are fine words for a tombstone. I always kid about my main piece of advice — being don’t take any advice.

In Boss Broad, eventually I get around to saying the challenging thing about life is not that it’s short but that it’s long. The longer you live, the more you’ll realize you’ve only ever cared about the same few things. The things that I felt invested in at 16 are still the things I feel invested in today.

A point of view is something innate inside of you, not something that can really be cultivated. Go wherever your heart leads, and keep on going. The older you get, the more all that practice begins to come across as “consistent and distinct.” I’m just over here, being my own complicated self all the time, still just talking about whatever I find interesting. And when people show up for that, when they want to read my stuff because it helps them with their own equally complex selves, that’s awesome. I feel useful, which is a real blessing.