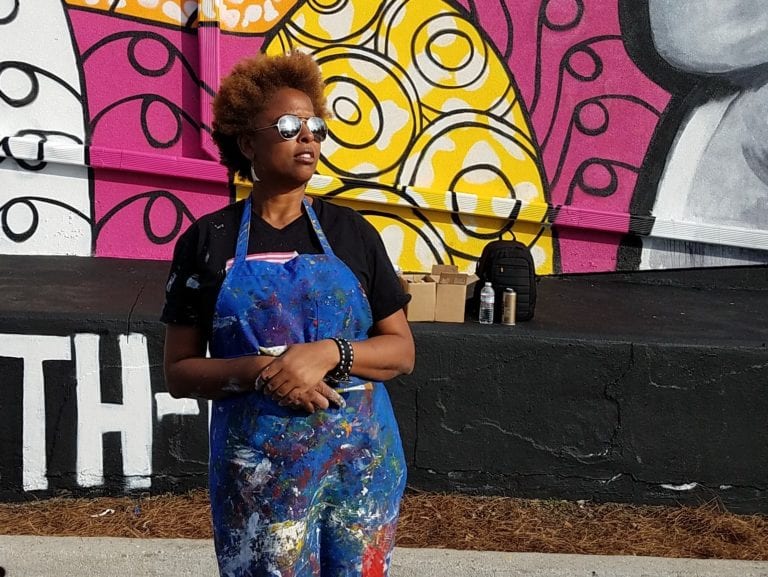 The work of Atlanta artist, activist and arts administrator Charmaine Minniefield celebrates the female angels, deities, mothers and warriors of African traditions. “My work invokes the power of ancestors by creating visual road maps from the past to the present,” she says on the Atlanta Street Art Map website.

Minniefield is the founder of The New Freedom Project, a community-based initiative that uses art to reclaim the lost narratives of disappearing African American communities and history. “History exists beyond the textbooks,” she says, “but in the African American culture, it exists in the shrines of our actual family archives.”

Minniefield finished her Ella Baker mural earlier this month at 196 Auburn Ave. N.E. in downtown Atlanta. Baker (1903–1986) was a civil and human rights activist who had a key role in some of the most influential organizations of her time, including the NAACP, Martin Luther King Jr.’s Southern Christian Leadership Conference and the Student Nonviolent Coordinating Committee.

You can learn more about Baker on May 29, when Minniefield and the Auburn Avenue Research Library partner to screen the documentary Fundi: The Story of Ella Baker. The 7 p.m. screening is free and open to the public. “Fundi” was Baker’s nickname and comes from a Swahili word that means someone who passes a craft down to the next generation.

Minniefield was one of 11 artists chosen to work with Off the Wall, a citywide initiative led by WonderRoot and the Atlanta Super Bowl Host Committee. Her mural of Ruby Doris Smith-Robinson can be seen at 904 Martin Luther King Jr. Drive S.W.

Smith-Robinson (1942–1967) worked with the Student Nonviolent Coordinating Committee from its earliest days in 1960 until her death. The Atlanta-born activist grew up in the Summerhill neighborhood and graduated from Price High School at age 16 and later from Spelman College. She died of cancer at age 25.

Minniefield honors Marjorie Prothro in Flowers Divine, a mural on Hapeville City Hall. Prothro, a florist, was the first African American businesswomen in the small city south of downtown.

Minniefield has previously painted murals featuring Atlanta actor, educator and activist Adrienne McNeil Herndon (on Ralph David Abernathy Boulevard and the Atlanta BeltLine Westside Trail); Atlantan Carrie Steele (at Adair Park and the Westside Trail), founder of the oldest black orphanage in the nation; and Watch Me Learn, done in collaboration with Doris Derby, an activist, documentary photographer and retired adjunct associate professor of anthropology at Georgia State University (at Edgewood Avenue and Jackson Street in the Old Fourth Ward).

ARTS ATL’s street art column is done in collaboration with Art Rudick and his Atlanta Street Art Map. We want to hear from you too. See something we should know about? Have an opinion or suggestion? Please email [email protected].