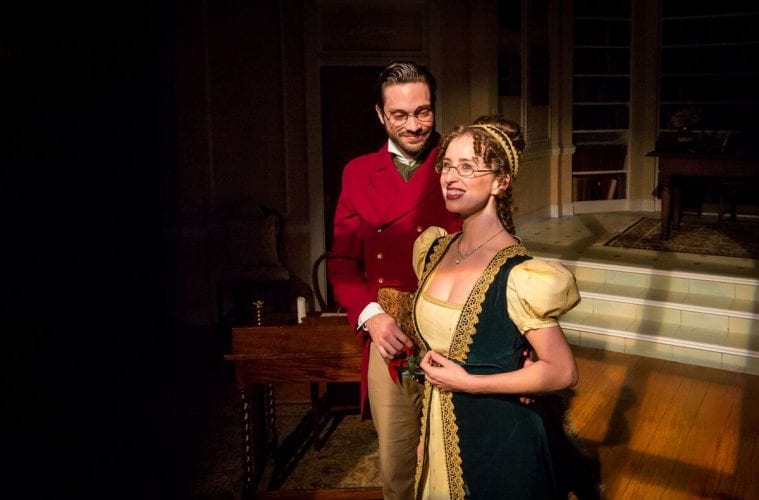 That former Atlantan Lauren Gunderson has become the most produced playwright in the country is no fluke or accident. Her work is smart and accessible, with female characters who refuse to follow what society seems to demand of them. For the holiday season, Theatrical Outfit is staging the delightful Miss Bennet: Christmas at Pemberley, a 2016 work penned by Gunderson and Margot Melcon. It’s a snappy comedy with an enthusiastic cast, running through December 24.

The play takes place two years after the activities of Pride and Prejudice, but feels fresh and current. It’s 1815 in England during the holiday season at the Pemberley Estate, where the Darcys — Elizabeth (Julissa Sabino) and Fitzwilliam (Lee Osorio) — are in marital bliss. (A little knowledge of Jane Austen’s beloved novel does help here.) Jane (Maria Rodriguez-Sager) is married too and expecting a child with husband Charles Bingley (Juan Unzueta). The youngest sibling, Lydia Wickham (Devon Hales), is also hitched, although her husband is off traveling.

The middle sister, one often overlooked by her louder ones, is Mary Bennet (Amelia Fischer). Unlike the others, she is more interested in books and maps of the world — as well as playing the piano — than hunting for a husband. She and Lydia frequently quip about their differences. (The word “spinster” often pops up.)

Yet Mary’s encounter with Arthur de Bourgh (Jonathan Horne), a lord visiting from Oxford, catches her completely off guard. Arthur is easy to talk to, and the two — gasp — share much in common. He seems to be an intellectual match for her, but some internal obstacles seem to stand in their way.

This is a witty, literate play, with the characters getting a lot of early mileage in with jokes about a Christmas tree in the estate. It’s filled with warm, likable characters, especially Mary and Arthur, and dialogue that is humorous and telling. Yet it also works as social commentary, with the playwrights making a statement about the time and Mary’s independence and ambition.

For about 45 minutes this holiday offering is virtually flawless, then it gets a touch softer with the introduction of letters that various characters write and leave in books for each other. The introduction of the character of Anne (Galen Crawley), who pops up with information about Arthur, also isn’t as riveting as the earlier sequences.

What’s clever, though, is how the playwriting duo make this a sequel of sorts to Pride and Prejudice and a stand-alone piece that feels modern as well. Carolyn Cook, an exceptional actress herself, directs and gives her actors plenty of room and time to create characters.

Among the supporting players, the versatile Sabino — looking nothing like her characters in Serenbe Playhouse’s Grease or Aurora Theatre’s The Hunchback of Notre Dame — and Osorio make a fine Darcy pair. Crawley’s character may be annoying, but the actress is able to bring comic touch to her role. Yet the real deal is the chemistry and attraction between Mary and Arthur, two peas in a pod who seem to belong together.

Fischer’s Mary is a spunky, back-boned heroine along the lines of the leading characters of the playwright’s Silent Sky and Ada and the Memory Engine, and the actress effectively portrays someone used to being on the sides, not fitting in the way others easily do. More known for dramatic work such as Actor’s Express’ The Crucible and Georgia Ensemble Theatre’s The Elephant Man, Horne does an impressive about face here. His Arthur is jittery and a bit nerdish. The character is quite funny as he tackles a subject he hasn’t been educated in — courting and the rules of marriage.

It must be said that Miss Bennet: Christmas at Pemberley is much sharper when it deals with Mary’s independence than when it turns into something of a love triangle with two other women. Yet it’s never less than enthralling. During a time where holiday fare can be box-office staples rather than original work, it’s great to see Theatrical Oufit debut this.

Gunderson has written that when she started this play, it was imperative to her that the work had to be something that Jane Austen herself would approve of. It’s safe to say — this would make Austen smile.