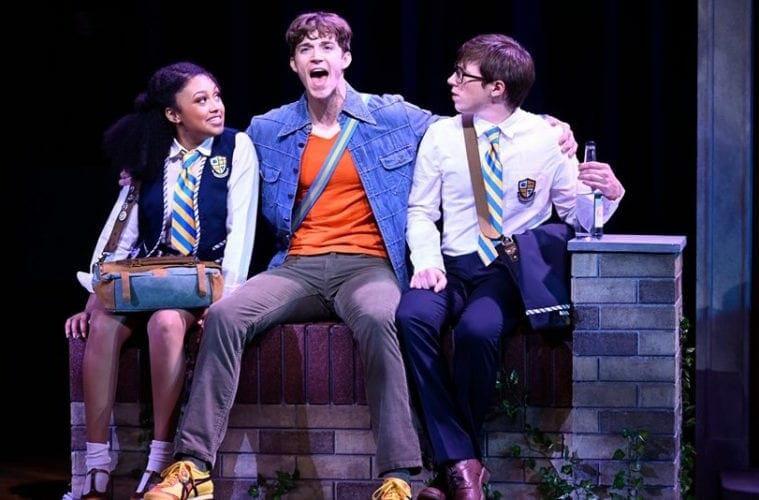 Jasmine Rogers (from left), Jake Boyd and Zachary Sayle as high school students in "Becoming Nancy" at the Alliance Theatre through October 6. Sayle plays a nerdy guy cast in a female role in the high school musical. Rogers is his best friend, and Boyd is his scene partner. (Photos by Greg Mooney)

The English suburb of East Dulwich lives up to its name, but things get much more interesting when David Starr (Zachary Sayle) is cast as Nancy in the high school production of Oliver! Adding to the drama is Maxie Boswell (Jake Boyd), the hot new soccer player cast as Nancy’s love interest. With the help of best friend Francis (Jasmine Rogers), Aunt Val (Jessica Vosk) and a few rock stars, David hopes to hit a high note in front of his parents and the jerks on the soccer team. Sally Ann Triplett, as David’s mother, sings “About Six Inches From Your Heart,” one of the musical’s better numbers.

There’s a lot going on at East Dulwich High. In addition to playing Nancy, 16-year-old David is trying to figure out whether he’s gay, which doesn’t seem to matter to the presumptuous Abigail Henson (Lizzie Bea). Plus, there’s a Rock Against Racism rally happening at a nearby park. It’s the 1970s, and racism and xenophobia are rampant in England.

Sayle makes David as nerdy as possible. He’s an introverted guy who comes alive onstage and would rather talk to the Kate Bush, Debbie Harry and Sting posters in his room than have a confrontation. Sayle might benefit from pushing his physicality a bit more, thereby distinguishing David’s personality. Becoming Nancy is truly his show, but he carries it better in Act II than in Act I.

Gary Milner, as soccer coach Bob Lord, embodies toxic masculinity with comedic timing. Vosk, who just finished a two-year run as Elphaba in Broadway’s Wicked, is charming, funny and delightfully eclectic as Aunt Val and Kate Bush (from the poster). Rogers, as the high-school bestie we all wish we had, displays her vocal chops in a scene at a gay disco. The rest of the young ensemble is fine, embodying teenage archetypes as they’re meant to. The Alliance in recent years seems to be in the business of producing musicals about teenage angst — Bring It On: The Musical (2011) and Tuck Everlasting (2014) are earlier examples. Last spring, the company staged the quirky, purgatory-set Ride the Cyclone. The Prom, developed in 2016, ended a five-month Broadway run August 11.

It’d be helpful if Becoming Nancy had more teens in its audience to serve as a litmus test, for that seems the show’s intended audience. It’s a smart business move. There will always be jocks and nerds, and, even in the age of Instagram, there’s no filter for the insecurities of teenhood. The material, however, can start to feel a little stale. It’s yet another musical about yet another teenage outcast who finds sanctuary in the arts. A couple of characters of color are sprinkled in to mitigate the circumstances. The parents and bullies are ultimately defeated, and everything turns out OK. It’s fine but not compelling. Jessica Vosk, most recently on Broadway as Elphaba in “Wicked,” plays Aunt Val.

Becoming Nancy is based on a bestselling British novel, same title, by Terry Ronald. And Rock Against Racism was a real concert series, which had its first march in Trafalgar Square in 1978. Dealing with anti-immigrant sentiment certainly connects the musical to now, given the contentious state of Brexit and the European Union. In the show, however, the rally is disrupted in a deplorable way that gets too little attention.

This musical is meant to be fun, which it is, but the score by George Stiles (music) and Anthony Drewe (lyrics) is pretty forgettable. The Alliance still hasn’t mastered the art of finding a memorable opening number, which is exactly what this show needs.

It does have a few standout songs. “On the Night Bus” is a beautiful duet for Vosk and Bea, who lament being single. It’s hard to keep a dry eye when David’s mom (Sally Ann Triplett) sings about the ups and downs of motherhood in “About Six Inches From Your Heart.” The songs “Abigail Henson” and “Just for Today” are fun.

Sending a musical to Broadway every few years is certainly a win for any theater — in fact, a ticket-selling website for a New York run of Becoming Nancy is already up (but not yet live). As it stands today, however, the show lacks a first act that feeds anticipation for the second. The cast — mostly with U.K., regional theater and Broadway credits — delivers feel-good performances, but the feeling is fleeting.