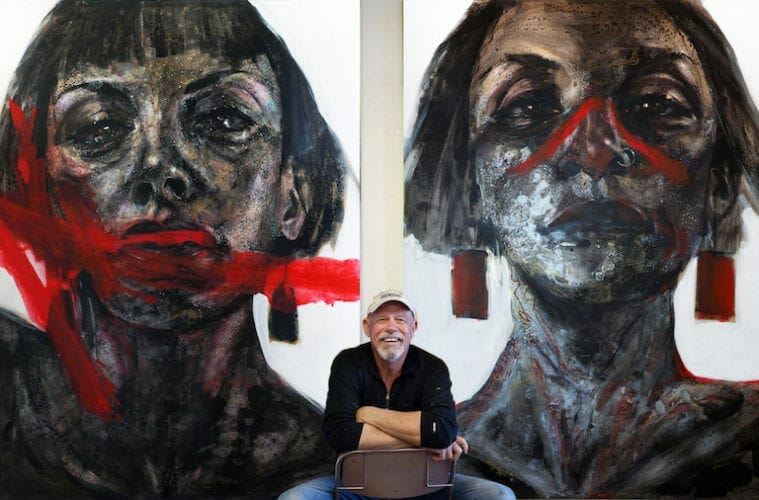 “I want you to feel like my subjects are staring into your soul, or that you can crawl behind their eyes to view the world from their perspective,” says Colorado-based painter William Stoehr, whose art can be seen at Bill Lowe Gallery through October 18.

William Stoehr, at Bill Lowe Gallery, says he paints “to be part of a larger conversation”

A pair of obsidian eyes stare out from a series of gigantic black strokes that suggest a face against a stark, white backdrop in William Stoehr’s Emma 2. A childlike graphic scrawled on the lower right corner of the 80-inch x 60-inch canvas reads, “Emma I promise to paint your portrait if you promise to go to rehab.”

Emma’s eyes shine, but it’s hard to tell if they’re brimming with tears or are radiant for reasons unknown. Her expression is ephemeral, and you fear that averting your gaze might cut off what little connection you have. But the temptation to look away is equally compelling — because bearing witness to what Stoehr calls “the purity of pain” is never easy.

Who is Emma? Is she in pain, or has she found relief? Is she asking a question or trying to convey an answer? Is the abstract rendering supposed to represent Emma? Or is it a depiction of the viewer? 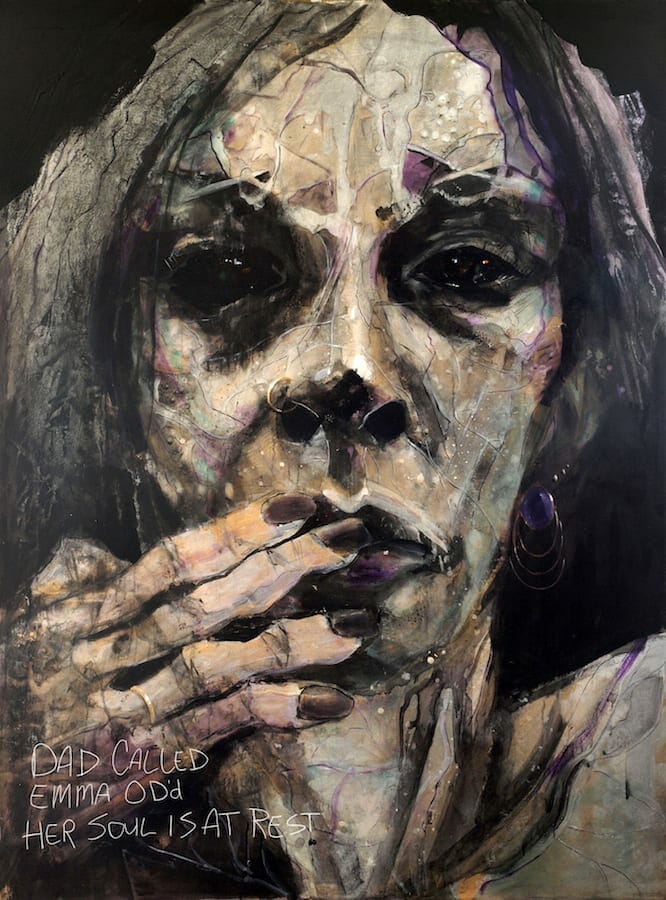 This piece, titled “Emma 1,” includes the words, “Dad called. Emma OD’d. Her soul is at rest.”

“I want you to feel like my subjects are staring into your soul, or that you can crawl behind their eyes to view the world from their perspective,” says Stoehr, an American artist who quit his dream job as president of National Geographic’s worldwide mapping businesses and taught himself to paint in 2004. Emma 2, most recently in an Oklahoma exhibit, got more responses than any other piece there. One person told Stoehr, “I’ve been depressed, and you’ve captured exactly how I felt.”

Emma 2 is on view at Bill Lowe Gallery in William Stoehr: A Visual Manifesto (through October 18) with other lifelike studies of closely cropped faces. All telegraph a constellation of conflicting emotions — devastation and resolution, desperation and dignity, ambiguity and fortitude, helplessness and hope. The textural surfaces appear three-dimensional, if not sculptural. Each painting is hung to ensure the subjects’ eyes occupy parallel planes — allowing the pieces to speak to one another. The faces are large, which elevates the sense of intimacy.

Stoehr’s late sister, who struggled with addiction since she was in high school, inspired Emma 2. During one particularly bad weekend, Stoehr vowed not to leave her side until she was in a safe place. After three days of cajoling, he offered to paint her portrait if she’d agree to enter rehab. She accepted, held up her end of the bargain and stayed clean for five years but overdosed on a mix of pills and vodka in 2012.

“It’s still raw,” he says. “I just finished Emma 3 at home, and she has become a stand-in for people who are addicted to opioids.”

Stoehr’s paintings explore some of the most defining issues of our time — AIDS, suicide, intolerance, discrimination, gun violence, war. He saw the fallout from war up close during his National Geographic tenure and has yet to reconcile how women and children can become collateral damage in battle. To help raise awareness about how trauma expresses itself and to democratize access to his art, he distributes free posters online that can be printed or shared.

Stoehr met his first and most frequent model, Nilsa, while living on St. John in the U.S. Virgin Islands in 2004. (He and wife Mary Kay moved to Boulder, Colorado, in 2008.) Although he once favored bright colors and celebratory themes, his tone has grown more somber. Nilsa’s high cheekbones, flared nostrils and full lips keep showing up in his models today, though, whether they’re Native American, African American, Asian, of European descent or Latina. 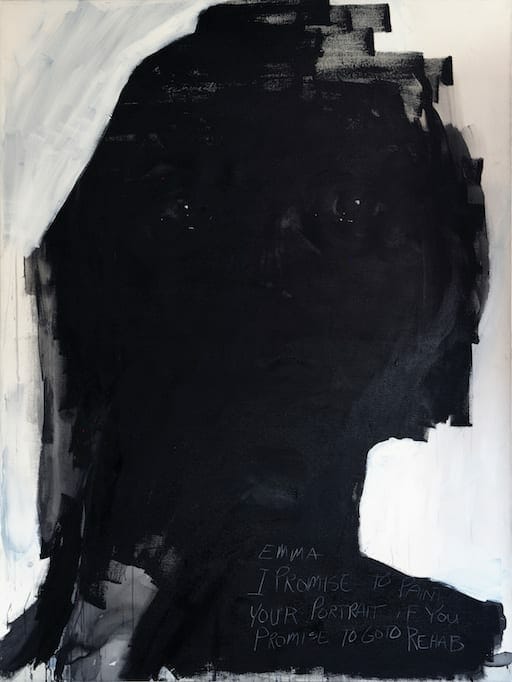 “Emma 2” includes the words, “Emma I promise to paint your portrait if you promise to go to rehab.”

He has no qualms about asking strangers to sit for him, and counts a barista, a sushi chef, a fitness trainer and a waitress among his favorite discoveries. Creating their likenesses, he says, is secondary to capturing his sense of who they are. And though the contemplative portraits appear to have been painted in monastic silence, the opposite is true.

“My models are great conversationalists,” Stoehr says. “They all have something to say about what I’m doing . . . which gives me more to work with. We talk about everything from art to politics to sports. The subject is dead serious, but the process is always fun.”

Stoehr was 16 when a high school teacher introduced him to the art of Willem de Kooning, Jackson Pollock and Franz Kline. That’s when he began wanting to become an artist. But it was 1964, America was fighting in Vietnam and he had a low draft number. Even if the circumstances were more favorable, Stoehr couldn’t afford art school. He was a good draftsman and equally adept spatially, though, so he focused on earning a degree in industrial engineering at a state school in Wisconsin where he grew up.

He founded a mapping company — subsequently acquired by National Geographic, and made the most of decades of globe-trotting by visiting art galleries, museums and World Heritage Sites and taking in street art. His use of metallic paints, and faces painted out of context, builds on iconic church art from the Byzantine Era. The broken facial planes and perspective shifts continue inquiries begun by artists at the vanguard of cubism.

The oversized, hyped-articulated hands are an homage to Ecuador’s Oswaldo Guayasamin and Austria’s Egon Schiele. The spilled paint, graphic lines and random marks that characterize his style reflect his ongoing fascination with the masters of abstract expressionism as well as graffiti artists.

He makes his marks using a limited palette of acrylic paint, metallic and iridescent colors, water, charcoal, conte crayon, graphite and oil pastels. His brush work is supplemented by sandpaper, the abrasive side of kitchen sponges and a heavy reliance on Bounty paper towels.

“I’m in search of my masterpiece,” he says. “But I know I’ll never find it because I keep changing my idea of what it is. And I never know when I’m done. So, I tell my clients, ‘If you buy one of my paintings and in a year or two I’m ringing your doorbell, don’t let me in!’”

A self-described guy who couldn’t bear to watch someone bullied on the playground, Stoehr has worked with children traumatized by war in Northern Ireland, led former gang members on wilderness adventures and volunteered with Big Brothers Big Sisters of America for decades. His capacity for empathy, he says, reached new heights eight years ago at Madrid’s Museo Reina Sofía.

“I was in the room alone with Pablo Picasso’s Guernica and immediately started crying,” he says. “I heard the people screaming, and my arms were burning [as if] I was in the fire. That gut-wrenching reaction got me thinking about how Picasso managed to create an environment so when you come in and look at a painting — POW! — you are instantly affected by it. That’s a successful painting to me.”

Stoehr says he loses control of his paintings the minute he finishes them. From then on, he wants the viewer to complete the narrative, and is especially interested when they interpret his work in ways he never intended. This happened when an Iraqi man said of one, “This woman has really done something to embarrass her family.” It’s not unusual for people to break down when confronting Stoehr’s work. And thanks to social media, he can count on a steady loop of feedback from more than 300,000 followers worldwide.

None has resonated more powerfully than a Syrian woman who sent him a message in response to something she saw on his Facebook page five years ago.

“This woman was living in a refugee camp,” Stoehr says. “After seeing one of my paintings, she told me she knew I understood her and that she wanted to die. But the next morning she looked at the same painting and saw hope in the subject’s eye and knew then that she, too, could have hope. She told me that I saved her life.

“This is why I paint,” he says, “to make a difference. To be part of a larger conversation. To engage, motivate, heal and be part of the solution. It’s just who I want to be.”