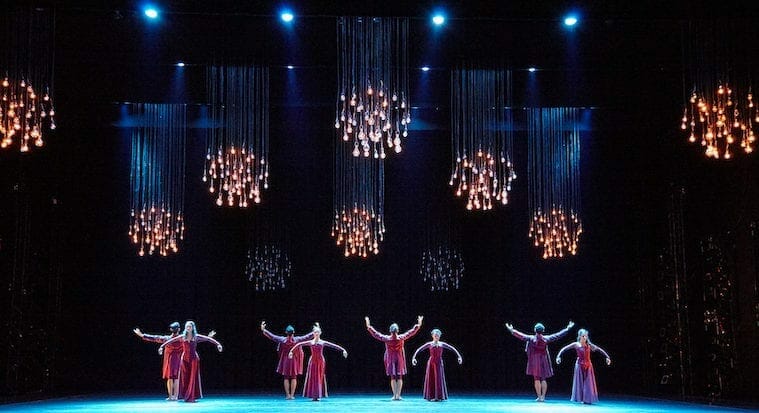 Atlanta Ballet’s season opener shows power, pitfalls of drawing from the past

At the heart of Vespertine, the first piece to open Atlanta Ballet’s 90th anniversary season last Friday, Jacob Bush and Dylan Clinard danced a telling duet. Back and forth, they folded into one another’s embraces then recoiled with combative moves. Tension built as one repeatedly pushed his partner backward, creating the second’s impulse to leave the relationship, which the first tried to stop, to no avail.

Pulls between the two seemed the basis of the work, but it also spoke of dualities in ballet as an art form. Should we honor history or innovate? Aesthetically, which should gain prominence — abstract form, with its necessary emotional restraint, or free-flowing dramatic feeling? Gennadi Nedvigin’s cool neoclassical aesthetic leans toward the former.

In Vespertine’s program note, Scarlett wrote on the universality of the love story, which is revealed onstage when two dancers look into one another’s eyes, making an emotional connection that draws in an audience.

Scarlett’s conception pulled the imagination back in time to the baroque era. In a space lit by Michael Hulls’ warmly glowing chandeliers, 11 figures in Scarlett’s deep crimson period dress retreated into the upstage shadows. From this space, Bush advanced forward, his sculpted physique nearly nude, arms rippling like a bird in flight. Grounded, with knees bent in an open parallel stance, Bush arched his torso, his body pulled taut as if yearning upward. He sprang into the intricate footwork of court dances echoed by quick arm gestures.

Baroque dance was at the core of Scarlett’s propulsive choreography. A circular leg gesture, toe tracing an arc on the floor, was enlarged when a male partner would lift a woman standing in arabesque and sweep her backward, her outstretched leg and body arcing up over his shoulders. Women covered and revealed their faces with the voluminous skirts that swooped with a sense of rolling momentum. With a quick tap of the hips, the clothed figures’ garments fell to the ground. Accrued together, the images suggested pulls between formality and sensuality — what we choose to hide and when we choose to hide it versus what we reveal and when we choose to reveal it.

What seemed missing in Friday evening’s performance (in contrast to the first time Atlanta Ballet performed the work with a more seasoned cast) was love — a depth of interpretation through passion and chemistry between partners onstage. Beautiful execution abounded, but it was beautiful execution with an emotional restraint that ultimately diminished the work’s power. Pianist Shirley Irek accompanied three consecutive duets as the couples glided through promenades and unfurled in lush arabesques and split-leap turning lifts. Costumed by Amarante in dresses with chiffon skirts of mauve, lilac, peach, maroon and blue-grey, the piece hearkened Jerome Robbins’ Dances at a Gathering and a genre of piano ballets that followed but Love, Fear Loss did little to push the art form forward.

Nonetheless, the work offered a vehicle for rising talents, including the musically gifted Jessica He and newcomer Thomas Davidoff. Partnered by Moisés Martín, Jessica Assef’s facile and poetic use of her long limbs blossomed with potential to convey tragedy. Airi Igarashi moved with Jordan Leeper as if yearning with every fiber of her body — her sorrow tempered by softness and delicacy.

While the piece Love Fear Loss lay comfortably in nostalgia, the concert’s last two works showed ballet’s power to build on the genius of predecessors and create work with relevance in a present moment that, like nature, continues to burst into new forms and creations.

In WOKE (excerpts) performed by Complexions, choreographer Dwight Rhoden (who’ll create a new work for Atlanta Ballet to debut in February) used classical technique as a basis for a slick, hard-driving and explosive style while responding to issues thrust at us in the daily news, such as gun violence, immigration and human rights.

Dancers appeared, pop-concert style, in fog-filled cones of light. They pushed their bodies to extreme extensions then rippled through gutsy hip-hop moves. Larissa Gerszke spun ferociously on pointe with her partner and then thrust a leg high and to the side with a defiant toss of her natural-styled hair as a vocalist riffed on “R.I.P.,” an acronym for many urgent expressions, particularly, “Rewind it, please, so we can remain in peace.” The evening’s highlight was the world premiere of Claudia Schreier’s “First Impulse.”

As if inside the composer’s imagination, Schreier picked up on Tamberg’s driving rhythms, generating ever-changing dynamic forms. Movement surged into surprising shapes and configurations. A snare drum signaled entry of lines of four dancers, which overlaid one another, interwove and then burst into crystalline lifts.

The stage dimmed blue as several sole female dancers moved backward with fast tiny steps on pointe, in horizontal pathways, streaming across the space with the steady speed of a flat-lined EKG.

In one duet, Bush and Sujin Han performed a fast-moving promenade with one of Han’s legs opened high to the side; her body then bowed into a shallow spiraling shell shape, which then uncoiled back on itself, like a dial reversing its direction. This image somehow spoke to Rhoden’s WOKE and its message to “Rewind it, please,” suggesting that even ballet, an art form created in the cradle of the European establishment, has the power to be an agent of change.

(This post was updated to correct the name of the pianist in Ricardo Amarante’s piece.)