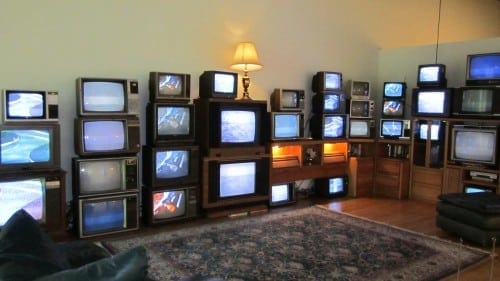 The jurors — Doryun Chong, associate curator at the Museum of Modern Art; Toby Kamps, chief curator of the Menil Collection in Houston; and Heather Pesanti, senior curator at AMOA/Arthouse in Austin — selected the finalists from a pool of 370 applicants. They’ll base their choice of the winner on the work in this exhibition, on view through September 8, and on studio visits.

Three of the four finalists make art that you plug in, but it would be a mistake to file it under “new media.” For example, Chistopher Chambers is more interested in cultural memory and the phenomenon of obsolescence than in digital innovation. He makes that point from the outset: backs of old analog television sets mounted on the wall “moon” visitors walking into the main gallery. Moving past that entry wall, one enters a time capsule of sorts. Chambers has set up a 20th-century “home entertainment center” replete with an easy chair, an Oriental rug and a library of VHS tapes, but one whose owner must be a hoarder or TV addict. The shelves and cabinets on three walls (one behind the chair) contain 49 analog TV sets of different sizes, stacked to create an eccentric grid.

For the first time, Chambers has used Hollywood movies as his source material. All of the imagery belongs to movies starring Kevin Costner. And his boyish and intensely blank face is the dominant leitmotif. As Chambers rummages through the actor’s career, his costumes and age change, but his expression is almost comically the same.

The TV sets play a succession of images: ocean waves, the night sky, a skyline, short clips of scenes from movies, especially close-ups of actors. Chambers has orchestrated the images as a sequence in which they might appear simultaneously or in repeated juxtaposition or some other pattern, but the sequence doesn’t convey a story or clear message of any sort. Which appears to be intentional. Chambers revealed in conversation (but not in the gallery) that Costner represents a certain sort of Hollywood star, as much a cultural artifact as the analog TV monitors. Chambers also wrote a very poetic statement about obsolescence, which he did not want to post. (It’s in the notebook at the reception desk.)

That’s too bad. For those who, like me, do not find the piece engaging as a durational experience, the statement might have offered a way in. Perhaps the artist is aiming for an abstract sensory experience or an analog of television as a warm bath, but that result does not seem commensurate with all the thought and work that went into this complex installation.

Derek Larson’s practice encompasses conceptual video, assemblage and, as represented here, a hybrid art form that fuses video and animated projection with painting and sculpture. His previous such efforts have been in some measure representational; free-standing wooden panels are cut to match the silhouettes of, say, a fountain or groups of people that are projected onto them.

Larson’s new body of work at the Hudgens trends toward abstraction. In “Genetically Modified” and “Shop ‘Til You Droop,” he places shaped wooden pieces over sections of busy and brightly hued assemblages. He projects multicolored light onto the wooden pieces in a manner suggestive of neon signs. The artist takes the opposite tack in two other works, replacing bright color and dramatic shapes with minimalist compositions of rectangular wooden panels inflected with colored fluorescent tubes, a few stickers and a couple of circuit boards. He reduces his means even further in “Nervous System,” a “line drawing” of colored wires that features a single, slowly twirling feather powered by a motor.

This series, also titled “Nervous System,” introduces a new thematic direction aiming to address concerns about the consequences of genetically modified food and pharmaceuticals and other instances of man’s meddling with nature.

Unfortunately, the series strikes me as unresolved. The visual data do not suggest or reflect the intended content, and, with the exception of “Nervous System,” it’s hard to tell whether the plugs, cords and projectors are intended elements, like the backsides of the TVs in Chambers’ work, or the exigencies of economics meant they couldn’t be hidden. Given the engaging work on Larson’s website, I wonder whether these pieces were just not quite ready for prime time.

Filmmaker Robbie Land is something of a naturalist. He has harnessed the phenomenon of bioluminescence, found in fireflies, foxfire mushrooms and certain aquatic organisms, to create a seven-minute film, “Matters of Bioluminescence.” The piece is a combination of footage he made of the subjects in their natural environments and film they themselves made — for example, the effect of fireflies interacting with film when both were placed in a jar. A scene from Robbie Land’s “Matters of Bioluminescence”

The film is a Zen optical experience of color fields, flashes of color and intimations of objects — suggestions of wings, for instance. It seems to have no beginning or end; one could watch for a good length of time before realizing it was repeating.

Land has presented the film in the darkened room, using a reel-to reel projector whose clickety sound viewers of a certain age will remember from movie theaters back in the day or watching instructional films in school. If there is a subject here, it might be time and light, the essentials of film.

Land also displays the film naked in strips sandwiched between glass plates suspended from the ceiling. Oddly, encountering and “reading” this feels like coming upon a prehistoric cave painting. Yet, despite the whiffs of poetic resonance, the project doesn’t quite make the transition from cool experiment to art. I wish there were a bigger payoff for this fascinating idea and all this artist’s labor.

Step into the hall where Pamela Longobardi has installed her sculptures and mixed-media collages and it feels as if you’ve entered a different exhibition. For one thing, “media” play an incidental role. More importantly, the work presents a clearly articulated vision and a continued effort to find ways to express it. Longobardi’s practice is driven by an ecological mission: to warn of the danger that discarded plastic poses to ocean flora and fauna and to the shores on which these floating garbage dumps sometimes make landfall. Her art encompasses research and cleanup expeditions during which she collects detritus for later use in her work. Ocean trash is thus both subject and material, which makes for a certain conceptual pith.

The work here varies in scale, format, specific materials and effectiveness. “Consumption Web for Monaco (self-proclaiming material snare),” in which seafaring trash clings to a web of found fishing net, seems, well, a bit obvious. I prefer the striking “Broken Molecule (Kyttaro/Carbon).” Stretching like a large Tinkertoy from floor to ceiling, it is an abstracted version of said molecule, which is necessary to life, or perhaps a memorial to it.

The most touching works, however, are the least assuming. “Economies of Scale: Spine for Greece I”  and II comprise chunks of matter that hang like a string of worry beads in the alcoves of the reception area. They exude an Arte Povera kind of beauty. Reading the label and discovering their source — styrofoam that clogged caves in Greece — whiplashes one into the reality this artist wants you to face.

So the jury will be comparing apples and oranges: artists, ranging in age from 31 to 54, at different stages of their careers and in the evolution of their work. I’d like to be a fly on the wall during the jury’s deliberations.

The winner will be announced August 10.