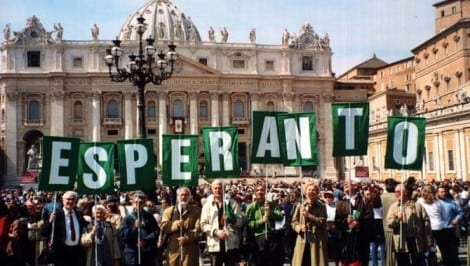 Esperanto is a language created in the late 1800s by an idealistic Polish eye doctor who believed that if everyone in the world spoke a common tongue, humanity could overcome racism, discrimination and war. One of the basic values associated with Esperanto is tolerance, toward other cultures, languages and ways of thinking. Fittingly, the word “Esperanto” means “one who hopes.”

During the early 20th century, hundreds of thousands of people around the world learned and spoke Esperanto and believed in its egalitarian ideals. Today, surprisingly, a vibrant Esperanto movement still exists, largely through a renaissance via the Internet. The language has spawned a growing international community of writers, filmmakers, musicians and other artists who produce original works in this “universal language.” Atlantan Tim Westover is an author who writes in Esperanto and English. His Marvirinstrato, a 2009 collection of short stories, is in Esperanto; his Auraria: A Novel, from 2012, is in English. He conceives his work for one language or the other.

“I had stories that could only be written in Esperanto, stories that were dependent on puns, on Esperanto culture, on Esperanto history,” Westover told Books, Bones & Buffy in a 2012 interview. “Writing in another language was an essential part of my development as a writer. I learned about the essence of a story — what is at the core, no matter what language it’s written in — and I learned about the unique flavor of English, its strengths and its weaknesses, by working in Esperanto, which has its own strengths and weaknesses.”

Esperanto’s 98th World Conference, which will convene in Reykjavik, Iceland, from July 20 through 27, will offer many cultural events, including nightly concerts of original music. Here’s a sampling of music in Esperanto:

Lou Harrison’s “La Koro Sutro” (“The Heart Sutra”), a setting of ancient Buddhist texts in translation for chorus and percussion, is the only fairly well-known classical composition in Esperanto. (Video above.)

Pafklik (Bang-Click), a hard-core hip-hop group in France, includes on its CD cover a “Parental Advisory” warning in Esperanto.

“Pasporta Servo” is a published list of Esperanto speakers who welcome traveling Esperantists into their homes. I benefited from the service during a trip to Canada last year. In coming weeks, I’ll return the favor for Joel and Yevgenia Amis, my Montreal hosts. She is Ukrainian, he is from Atlanta, and they met through Esperanto and speak the language exclusively at home. They will meet with the Esperanto Society of Metro Atlanta on July 13. Anyone interested in attending the July 13 or August 24 ESMA gatherings is welcome.

Jeffrey Baxter is the choral administrator of the Atlanta Symphony Orchestra, where he manages and sings in its all-volunteer chorus.