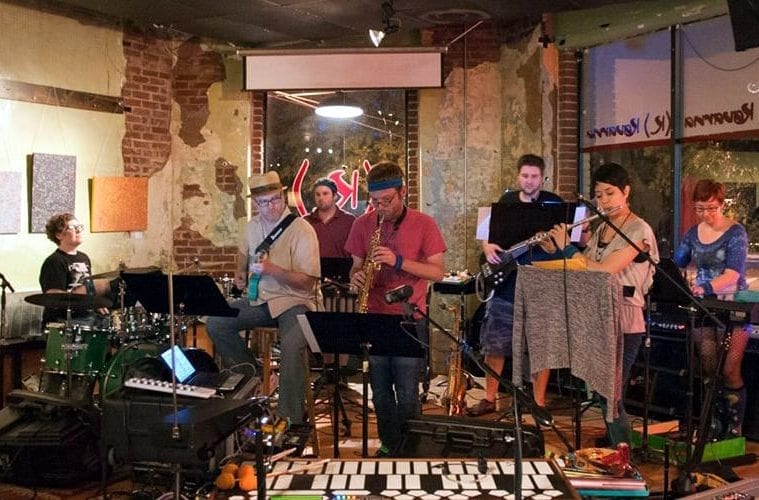 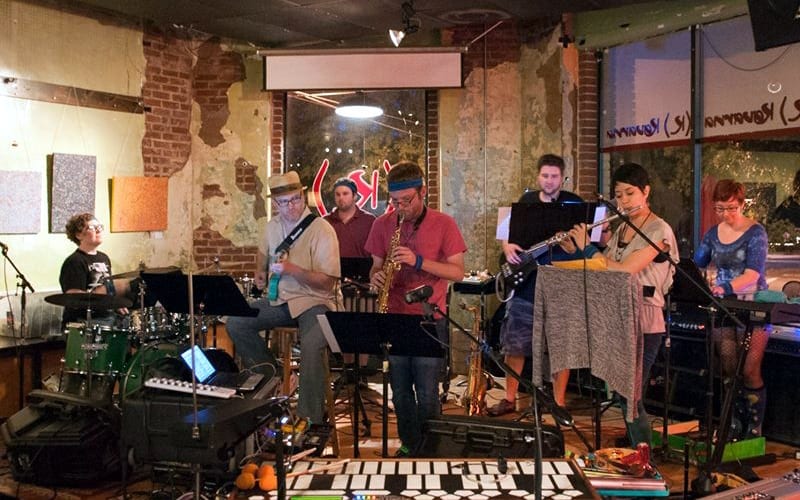 The Clibber Jones Ensemble at Kavarna. (Photo by Hector Amador)

Saturday was a long day of continued heavy rain for metro Atlanta, and as the clock neared the 8:30 p.m. showtime at Kavarna in Decatur’s Oakhurst neighborhood, musicians of the new-edge Clibber Jones Ensemble were standing outside the darkened café, as was multi-instrumentalist Klimchak, also scheduled to perform. Electrical power in the neighborhood had gone out less than an hour before, leaving the room with no lights, no air conditioning and no amplification. Only the free city of Decatur Wi-Fi was operating. But a good number of the audience sat in the dark inside Kavarna while the rest waited outside.

Georgia Power estimated that the power would be back by 9 p.m. With some natural light still available before sundown, the musicians debated whether to wait or to pack up while they could still see. Some began to break down their equipment. Then, at exactly 9 on the dot, the lights came back on. Most of the audience of about three dozen remained.

“That whole thing is what made it magical for me,” Olivia Kieffer, the ensemble’s leader and drummer, said the next day. “We were thinking we’d have to cancel, then everybody became so excited when the lights came back on. It made it extra special.”

The musicians reassembled, tested their set-ups and, 20 minutes later, the Clibber Jones Ensemble kicked off its first set with Kieffer’s energized, rock-driven postminimalist piece “Pack Your Crackers!” It was followed by two more Kieffer originals: “KCB” (for “Kieffer Cousins Band”) and “Bread of Life,” with a swaying pattern over drones that evolved into cross-metrical dancing triplets.

Next came “Machine V” by Chicago composer Marc Mellits, a joyful, polymetrical, polyrhythmic blast from 2001, which Kieffer rescored for the ensemble’s instrumentation, giving it a more rock-driven feel. The first set ended with a fun piece, “Arm Flappers” — another Kieffer original, arranged for the band by her husband, percussionist Isaac Anderson — which ended in a spate of deliberate chaos, cut off by a single cymbal crash.

Klimchak then came on to play a solo set with his tight setup of marimba lumina, theremin, a small laptop processor and various small inanimate objects, including a squeaky toy frog. Once again he demonstrated his virtuosity as a performer: both feet busy with drum pedal controllers, four mallets in his hands and a wind controller at his mouth. He started with a slinky, jazzy tune with a funky rhythmic undercurrent, adding a little theremin to the mix in the middle.

He also played a familiar Klimchak oddity, “Tarzan on Acid,” replete with yodeling and “uh-huh” vocalizations over a definite beat, and layer upon layer of looped sounds that included “harmonic singing” and, naturally, a vocal duet with the squeaky frog. Alas, as the performer warned in advance, his monitors weren’t working, so he had a rough time with some overamplified sounds here and there.

Klimchak’s set ended with a short piece that began with electric piano and drum sounds under a whiny lead synthesis patch, then let loose a fat bass ostinato with a wildly screeching synthesized trumpet overlay, the latter bringing the set to a hair-raising conclusion..

The Clibber Jones Ensemble returned with a retro pop-culture number from the 1980s, the theme from the “MacGyver” television series. Two originals followed: “Strawberry’s Flight” and the premiere public performance of “Bright Wings.”

“I Am the Avalanche” has become the ensemble’s signature piece, and it’s raising money to make a studio recording via an indiegogo link on its website. But better than any critic could describe in words, here’s the YouTube video from this very concert:

This video is representative of the current Clibber Jones sound, which evolved over last year when the lineup changed, most importantly with the arrival of electric guitarist Darren Nelsen, whose playing has a very different sound from the group’s former guitarist, John Turner. Other changes include percussionist and vibraphonist Brandon Dodge, replacing his colleague Victor Pons, and the addition of keyboardist and keytarist Amy O’Dell. Continuing members are leader Kieffer, Tim Crump on soprano and tenor saxophones, Teresa Feliciano on flute and piccolo and Bill Pritchard on bass.

One “happy mistake” in the performance, as can be seen in the video, came near the end when O’Dell meant to use a heavy driving bass patch on the keytar but accidentally hit a sampled voice patch instead. This unintended synthesized “vocal” line with wide leaps was a musically interesting and fun mistake.

The group closed the show with a final Kieffer original, “1997,” which included the eerie sound of conch shell horns.